Of the donations made by SU employees, 71% went to Democratic groups, 26% went to Republican groups and the remaining 3% were to unaffiliated groups.

In the past nine months, employees at Syracuse University have donated over $45,000 to federal political organizations, according to data collected by The Daily Orange from the Federal Election Commission.

Of that amount, 71% went towards groups that explicitly support the Democratic party or its candidates. About 26% of the total sum went toward Republican groups, and the remaining 3% went to groups that did not have a defined party alignment.

The tendency for SU employees to put money towards democratic groups did not surprise Grant Reeher, a professor in the Maxwell School of Citizenship and Public Affairs and the director at the Campbell Public Affairs Institute. 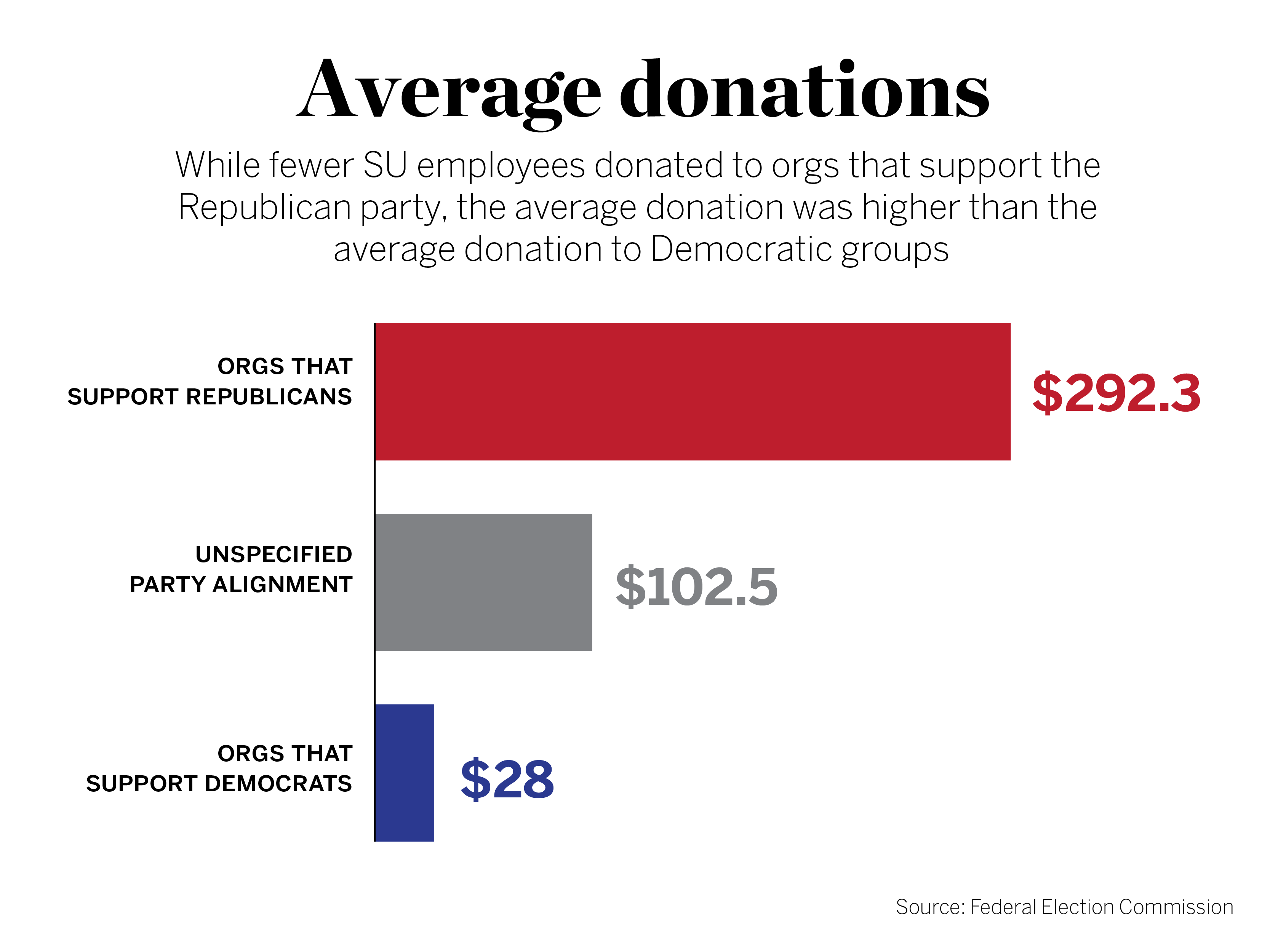 Reeher said that the low average for Democratic donations may have to do with messaging.

“Democrats have been emphasizing grassroots activism and participation, so you’re going to get probably more smaller donations,” he said.

Donations to Republican candidates from SU employees also had something in common. Three of the top four Republican groups that employees donated to had previous political disagreements with former President Donald Trump.

The congressional campaign of Rep. Liz Cheney, R-Wyo. is happening more than 1,500 miles away from SU’s main campus, but she received $5,700 — the most money from SU employees to a Republican. Cheney previously voted to impeach Trump while in office and was subsequently censured by her state’s Republican party.

This pattern of disagreements continued with Rep. John Katko, R-Camillus, and Sen. Lisa Murkowski, R-Alaska, who were both in the top four for SU donations to Republicans. Katko, Syracuse’s congressperson, also supported Trump’s impeachment following the U.S. Capitol riot on Jan. 6. Murkowski publicly called for Trump to resign on Jan. 8 of this year.

“The anti-Trump thrust of this doesn’t surprise me, because there’s a certain kind of Republican that tends to be more prominent in this area, and at a university like Syracuse, that was going to be very frustrated with the kind of leadership that Donald Trump was exhibiting,” Reeher said.

SU also has a high level of disparity in money donated to federal political organizations. The top ten donors range from giving $9,500 to $1,106 this year and make up 58.8% of the money given. The next 180 donors make up the remaining 41.2%.

Compared to other colleges in the Syracuse area, SU has an extremely politically active employee base.

SU reports 29 active COVID-19 cases on Tuesday, an increase of 1

Blueprint 15 formed partially in response to concerns around displacement that could result from the impending Interstate-81 removal project. END_OF_DOCUMENT_TOKEN_TO_BE_REPLACED

The vigil started with a speech and introduction by Nia Williams and Jacob McGraw, peer educators of the STOP Bias and Hate Initiative. END_OF_DOCUMENT_TOKEN_TO_BE_REPLACED

Neal Powless spoke with The Daily Orange on what he has changed in the program since the 2019-2020 report. END_OF_DOCUMENT_TOKEN_TO_BE_REPLACED

Syracuse Police Department will crack down on fireworks, dirt bikes

SPD, DPS must be more vigilant around campus