Syracuse relied heavily on Sean Tucker, who was coming off a five-touchdown game against UAlbany last week.

Malik Willis was under pressure on his own 30-yard line late in the fourth quarter. Syracuse’s Cody Roscoe approached him from behind, swatting at the ball from hitting Willis as linebacker Marlowe Wax jarred it loose. Mikel Jones pounced on it, and SU had the ball just 30 yards from the end zone in a tie game.

The Orange had been held to just seven points in the second half, but they took advantage of the opportunity. Head coach Dino Babers took a conservative approach, running the ball and using timeouts to run the game clock down as far as possible. After quarterback Garrett Shrader took an option keeper to the 16-yard line, Babers used his final timeout with just one second remaining. It set up Andre Szmyt, the 2018 Lou Groza Award winner and Syracuse’s four-year starting kicker.

Szmyt set his feet at the 34-yard-line, lined his left arm up with the goalpost and drilled the kick right down the middle. Syracuse’s players stormed the field and mobbed Szmyt. He had just given SU its best start through four games since 2018, when the Orange went 10-3.

“We knew what the plan was. We were gonna run the clock out, we had a great field goal kicker so we were going to let it come down to him,” Shrader said. “The biggest thing was just giving him an opportunity … and he made a great kick.”

Szmyt has seen many of the highs and lows of the Babers’ era. He redshirted in 2017 when Syracuse upset No. 2 Clemson at home. He was a unanimous All-American the following year when SU was a top-25 team on the rise. But then he watched Liberty visit the Carrier Dome pick up a 17-point win and celebrate on SU’s field postgame last October, cementing a true low point for Babers and the Orange.

“We had that bitter taste in our mouth and it feels good to be out here and be a part of the win and get revenge back from last year,” Szmyt said.

For the Syracuse program trying to rebuild after a historically-low 1-10 season, Friday night’s walk-off win against Liberty was a step in the right direction. The Orange’s defense held one of the top quarterbacks in the country, Malik Willis, to just 49 rushing yards and sacked him six times. SU’s offense relied on a rushing attack featuring Shrader and Sean Tucker, who ran for 169 yards and a touchdown.

Babers opted to start Shrader at quarterback after Tommy DeVito started Syracuse’s first three games. He informed the two of his plans just hours before the game in a hotel, Shrader said postgame. The Mississippi State transfer provided more of a running presence, finishing with 53 yards rushing yards and two touchdowns, but he threw for just 77 yards on 6-of-15 passing.

Leading up to the game, SU’s focus was on containing Willis. After scoring six touchdowns in his last game, Willis threw for 242 yards and three touchdowns, but the Orange’s ability to rally to the football and gang tackle proved crucial.

Last year, Willis and Liberty came into Syracuse and picked up a 38-21 win. It was the start of Liberty’s surprising 10-1 season that finished with a top-20 AP Poll ranking at the end of the season. Willis had no trouble picking apart SU’s defense, and recorded three touchdowns and over 250 total yards of offense.

SU tried different defensive looks, including blitzing multiple linebackers or having them fake pressure, to confuse Willis. The Auburn transfer found himself scrambling multiple times, including one second-quarter play where Willis realized too late that Geoff Cantin-Arku and Kingsley Jonathan were right in his face. The two dragged Willis to the turf for a loss of over 15 yards.

Throughout the game, the Orange’s defense displayed their ability to bring multiple defenders to the ball. On a third-and-long midway through the third quarter, Willis rolled to his left, looking for a man deep to throw to. Instead, Jones met him in the backfield. Willis broke two tackles, including one attempt by Jones, but he was brought down by three Orange players for the sack, forcing a punt.

With just over eight minutes left in the fourth quarter, Liberty faced a 4th-and-goal. With the game tied at 21, Liberty head coach Hugh Freeze opted to go for it, and Willis rolled to his right, looking for space to get into the end zone. Instead, Wax caught him from behind, and other Syracuse tacklers joined in to force a turnover on downs.

“Just seeing my guys rally to the ball is a great sight,” cornerback Duce Chestnut said. “(We) did what we had to do and our players were making plays.” 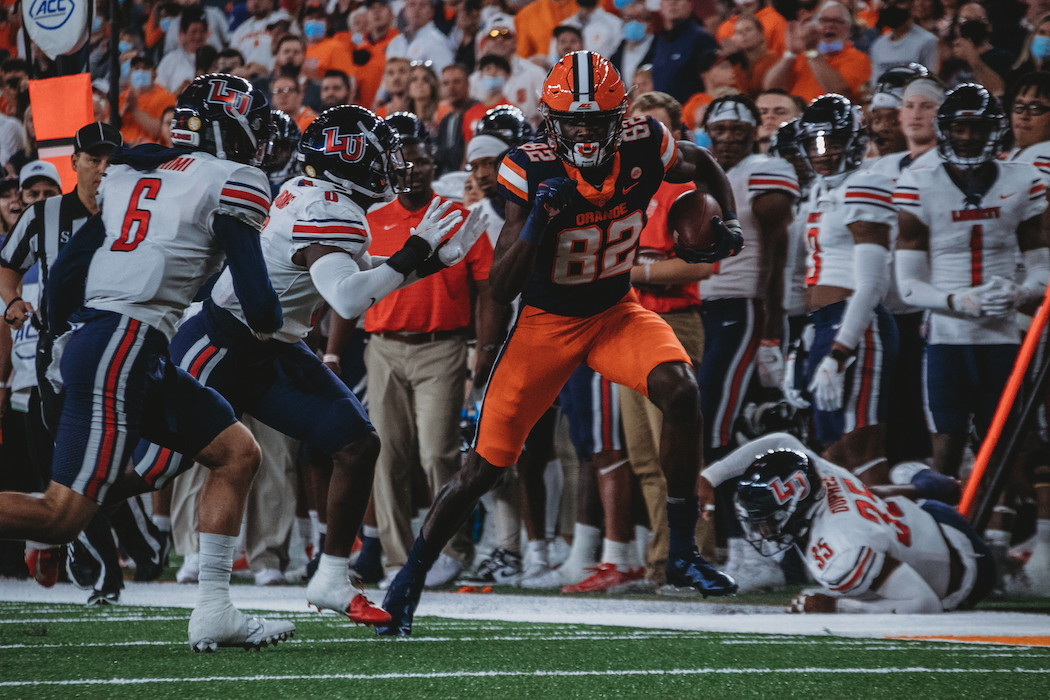 The Orange came out aggressive, winning the toss and electing to start with the ball. Elizabeth Billman | Senior Staff Photographer

But Liberty was able to break open several big plays in the second half. After Syracuse jumped offsides before a second down play in the third quarter, Willis took advantage of the free play and threw to CJ Daniels on the left side of the field. Daniels hauled in the throw and scored a 23-yard touchdown to cut SU’s lead to just seven.

After the Orange went three-and-out, Willis handed the ball off to running back Shedro Louis, who burst through a hole in the middle of the field for a large run into Syracuse territory. A few plays later, Liberty picked on Chestnut, who had lost Demario Douglas in coverage, and Willis easily hit his receiver for a 33-yard touchdown, tying the game at 21.

Last year, Syracuse was without DeVito, offensive lineman Dakota Davis and several others when it faced the Flames. Rex Culpepper filled in for DeVito, but he couldn’t keep up points-wise with Liberty’s offense. But Friday night, Babers had both DeVito and Shrader as options under center. He also had Tucker, who was coming off a five-touchdown performance last week against UAlbany.

The Orange came out aggressive, winning the toss and electing to start with the ball. On the first snap of the game, Shrader went for the deep ball on play-action, but just overthrew Damien Alford, who had beaten his man straight downfield. The Orange punted three plays later, part of a slow start offensively for both teams.

Shrader opened the scoring less than two minutes into the second quarter when he leaped over the goal line on a quarterback sneak. On Syracuse’s first drive of the second half, Shrader and SU were inside the 10-yard line when the quarterback faked a handoff, sidestepped left, shed a tackler and dove into the end zone to put the Orange up 21-7.

Babers said Shrader’s running ability helped him earn the start. His touchdown runs showed how he differentiates from DeVito, who has a stronger arm but hasn’t given SU much in the running game over the past three seasons.

Throughout the night, though, Syracuse relied heavily on Tucker. In the second quarter, wide receiver Taj Harris was put in motion, but Shrader handed the ball off to Tucker, who broke through a hole on the left side to score untouched. It put the Orange up 14-0 early in the second quarter, putting pressure on Willis and the Liberty offense. Shrader said stretch and outside zone runs for Tucker were working especially well for SU, and it kept going back to them.

“There’s one thing when you’re on the team and Sean Tucker is running the ball the way he is: that our number one job is to find ways so he gets the ball,” Babers said.

With Shrader under center and Tucker in the backfield — along with the occasional handoffs to Abdul Adams — SU based most of their offense on its rushing attack. Even with an up-tempo offense that emphasized no huddles, the Orange controlled the clock, finishing with no turnovers and 24 points.

Now Syracuse has a 3-1 start, a hot running back and a defense that has found ways to contain explosive offenses. Even without a true starting quarterback, one 34-yard kick from a four-year starter planted the seed that could be the beginning of a turnaround for a program under Babers trying to forget 1-10 seasons and blowout home losses to Liberty.

“This was a complete team win,” Babers said. “Hopefully we can build upon this. You don’t build on this with individual accomplishments.” The provost specifically addressed gender-based pay inequity and also committed to share the findings of the university’s periodic salary reviews. Ritter did not specify when these reviews will take place or be shared. END_OF_DOCUMENT_TOKEN_TO_BE_REPLACED Families remember SU alumni who died in the Sept. 11 attacks

How to repurpose your Halloween costumes for everyday use