‘He just knew he was a quarterback’: What Garrett Shrader brings to SU’s offense

Garrett Shrader went 4-for-6 for 42 yards on Saturday against Rutgers. He's expected to compete with Tommy DeVito for the starting job again this Saturday.

Tracey Shrader remembers elementary-school age Garrett Shrader approaching him and saying he wanted to play quarterback. Originally when Shrader began playing football at 7 years old, Tracey, a former quarterback, had his son playing center and linebacker to ingrain toughness in him.

Shrader and his dad went to a middle school field in Denton, Texas, where Shrader threw into a target net and worked on footwork. Tracey came home and told his wife, Christie, he was impressed with Shrader’s abilities.

“It’s pretty natural for him,” he recalled saying at the time.

At the end of his fifth grade school year, Shrader’s family moved to Charlotte, North Carolina. He developed into one of the top prospects in the state and led Charlotte Christian (North Carolina) School to back-to-back state championships.

After two years playing against Southeastern Conference competition at Mississippi State, Shrader transferred to Syracuse in hopes of becoming a star quarterback like he was in high school, wanting to turn Syracuse around after its 1-10 season. He has been in a battle for the starting position with returning starter Tommy DeVito since arriving at SU. After playing sparingly in the Orange’s week one win over Ohio, Shrader started the second quarter against Rutgers and went 4-for-6 with 42 passing yards. Compared to DeVito, Shrader showed more of a willingness to leave the pocket early and scramble, but he ended up losing yards on his four rushing attempts.

“Does he think he’s capable of starting and being the guy? Yeah, he does. And from an athletic standpoint, I think he’s very capable,” Tracey said.

When he first entered high school, Shrader didn’t even get a chance to fight for a starting position. He chose to attend Charlotte Christian School after the head coach at his area public school told him he wouldn’t start a freshman quarterback even if the freshman in question — Shrader — was better than the older player. This mentality that he could be the starter on his first day is the same mentality Shrader had coming into Syracuse, his dad said.

When Charlotte Christian head coach Jason Estep first saw Shrader before his freshman year of high school, he saw a tall and skinny quarterback who could move the ball well in both the run and pass game. He also saw that Shrader’s build led to a long delivery when he threw, so Estep worked on shortening Shrader’s throwing motion and making his release quicker.

Estep’s previous quarterback, Austin Kendall — who later played at Oklahoma and West Virginia — had left for an area public school, and Estep began recruiting Shrader, thinking he could start as a freshman. Shrader tweaked his back in a scrimmage before his first year, but still won the quarterback job that he would hold for the rest of his time at Charlotte Christian.

Estep hired former Clemson assistant Mike Miller as his offensive coordinator and quarterbacks coach in 2016. Miller installed an offense similar to Clemson’s, one which featured 11 personnel (one running back, one tight end) and a no-huddle offense. Shrader “came into his own” that year, Estep said. Charlotte Christian went 10-1 and averaged 40 points a game. 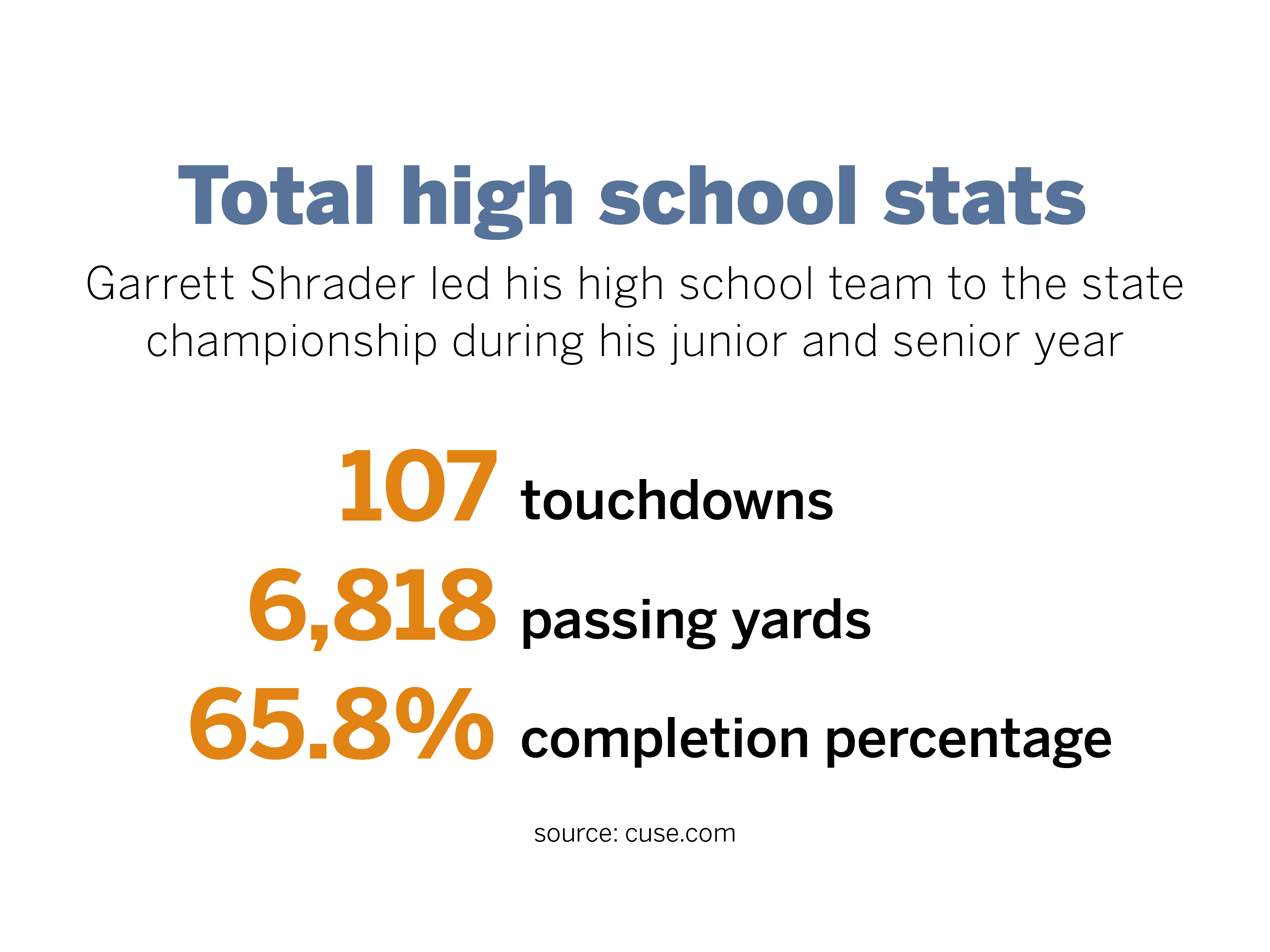 “I just say that it was just advantage Charlotte Christian offensively most of the games that Garrett played in just because of what he brought to the table,” Estep said.

Miller left after one season to become an assistant coach at Alabama. Estep replaced him with Pete Metzelaars, a former NFL tight end who played in four Super Bowls with the Buffalo Bills. The Knights’ coaching staff featured several other former NFL players, which allowed Shrader to watch film at a “different level,” Tracey said.

“Honestly, had he gone to a different school without that level (of coaching experience), I’m not sure he would be the player he is today,” Christie said.

Shrader led Charlotte Christian to state titles in his junior and senior seasons, finishing his high school career with 107 touchdowns over 34 games. He ran for over 2,200 yards, too, and was listed as a 4-star recruit by ESPN and others. College coaches began extending offers to Shrader, with his first coming from Louisville in his sophomore season. 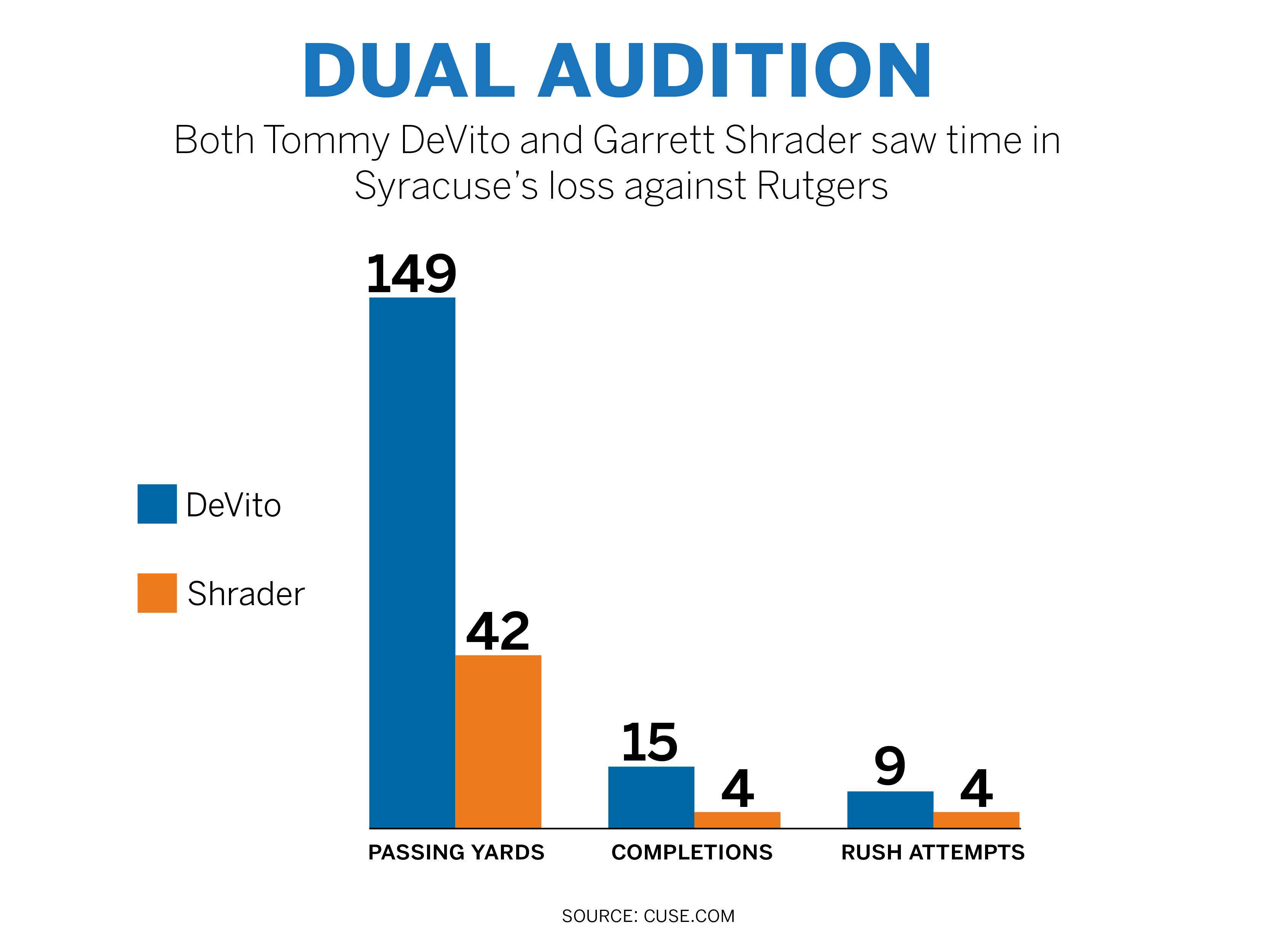 Tracey said Shrader received interest from several schools, including LSU and Oklahoma, that he didn’t even want to visit. LSU’s head coach Ed Orgeron, who has a heavy Louisiana accent, called Shrader, but the only thing Shrader took away from the conversation was that he “couldn’t understand a word he said,” Tracey recalled.

Throughout his recruiting process, Shrader developed a close relationship with Joe Moorhead, then the offensive coordinator and QBs coach at Penn State. Moorhead was easy to talk to, Christie said, and “very personable.” But Shrader feared Moorhead would leave Penn State for a better job — which he did in 2018, when he became the head coach at Mississippi State. The Bulldogs already had a quarterback committed, but Moorhead offered Shrader a spot, and Shrader committed.

“He likes an underdog,” Christie said. “He likes to be in a situation where he can make something better … He really wanted the opportunity to help a team grow and to get better, and I think he saw that at Mississippi State under Coach Moorhead.”

Like high school, Shrader became the starting quarterback his freshman year at MSU. He appeared in 10 games, making four starts, and was one of three Football Bowl Subdivision QBs to account for 1,000 yards passing and 500 yards rushing. Shrader’s willingness to put his body on the line made him go viral.

But after the 2019 season, Moorhead was fired and replaced by Mike Leach. Leach brought in his Air Raid offensive scheme that emphasized getting the ball out of the quarterback’s hands as fast as possible. Leach made it clear that he didn’t want his quarterbacks — including Shrader — to run, even if it was one of their strong suits, Christie said.

Leach also made a comment that the next step for all the quarterbacks on his roster would be coaching. This was “demotivating” to Shrader, who has long dreamed of playing in the NFL, his parents said. Shrader didn’t think there was a quarterback better than him on the roster, but he was forced to move to receiver and special teams and left the Bulldogs for the transfer portal in October.

Shrader ended up deciding between Virginia Tech and Syracuse. The Hokies’ quarterback, Hendon Hooker, announced he was entering the transfer portal on Dec. 17. Shrader questioned why a starting quarterback would want to leave a school, Tracey said, but two days later he committed to Syracuse. During the transfer process, he developed a close relationship with SU offensive coordinator Sterlin Gilbert, who designs his offense around the quarterback’s skillset — something Shrader liked.

After arriving as a January enrollee, Shrader got to work learning SU’s offense. Toward the end of summer practices, he said he felt “light-years ahead” of where he was in the spring. Gilbert called the same plays for him and returning starter DeVito despite the differing skill sets between the two, as Babers searched for an “outright winner” in the quarterback competition.

He just knew he was a quarterback — which he is. And he's a good one.

Babers named DeVito the week one starter but said he planned before the Rutgers game to give both quarterbacks playing time. Saturday’s game against Football Championship Subdivision opponent Albany could provide a better opportunity for Syracuse to find the true winner of the battle before Atlantic Coast Conference play begins.

“There’s a big learning curve, so it’s kind of hard to throw you in there and be four or five years behind somebody,” Shrader said in August. “I feel like I’ve been given an opportunity, and I just got to continue working to get better.”

The differences between DeVito and Shrader extend further than just their football abilities. While DeVito is a North Jersey product who attended Don Bosco Prep High School, Shrader is a southerner and an “old soul,” his dad said.

Shrader is an introverted outdoorsman who loves to hunt and cut down trees. He stays off social media and instead listens to Charley Pride and Hank Williams Sr. He even taught himself the guitar after his mother made him take an intro to public speaking course in high school instead of a guitar class. After entering the transfer portal and finishing his semester at Mississippi State, Shrader got his pilot’s license. When asked about Shrader’s unique off-the-field persona, Estep laughed, saying “he’s a different cat.”

But that didn’t matter when Shrader jogged out onto the Carrier Dome field against Rutgers. From there, it was about displaying the toughness ingrained in him from a young age and proving he could be the dual-threat, point-producing quarterback that he was before coming to Syracuse. His only drive against RU ended without points, but Shrader’s abilities as a runner and passer gave the Orange their second-longest possession of the half.

“He’s going to be prepared to play, and he thinks he’s better than everybody else out there,” Estep said.

SU gets no pressure on Malik Cunningham, allows 4 passing touchdowns in blowout loss

3 takeaways from Syracuse’s 41-3 loss to Louisville

Community members are working to mark the graves of 80 Civil War veterans at Oakwood Cemetery. dailyorange.com/2021/11/oakwoo…

After a 38-point blowout to Louisville, @anish_vasu reviews the four plays that displayed Syracuse's lack of offens… twitter.com/i/web/status/1… The Daily Orange breaks down the four plays that displayed Syracuse's offensive struggles in its 41-3 blowout loss against Louisville. END_OF_DOCUMENT_TOKEN_TO_BE_REPLACED

SA discussed a new community engagement project called Thankful for Syracuse Food Drive, which will collect nonperishable food items for incoming Afghan refugees who are being resettled in the Syracuse area. END_OF_DOCUMENT_TOKEN_TO_BE_REPLACED

Though cooking in college can be challenging, meal prepping with the “rule of threes” can simplify healthy eating. END_OF_DOCUMENT_TOKEN_TO_BE_REPLACED

Object Lessons explores photography and its subject with varying success