A judge in Albany Supreme Court ruled in March that New York’s full incarcerated population will become eligible for the COVID-19 vaccine.

Editor’s note: A free-to-ship fact sheet of what people in prison need to know about the COVID-19 vaccine can be found here.

In early April, days after he became eligible for the COVID-19 vaccine, Tracy White sat down in his prison dorm and wrote down four reasons why he would get the vaccine.

He wanted to protect others he comes in contact with. He wanted to protect himself from testing positive again. Upon his release, he’ll try to start his own cleaning business in Syracuse, and he didn’t want to be “alienated from society” when that happens. He wanted to be a part of the slow return to normal that he’s watched on cable TV.

White ultimately decided to sign up for the vaccine. But he’s still waiting to receive it — and he still has worries.

“Everybody’s nervous, including myself, mainly because we’re sitting here watching the news, and we’re looking at all the side effects that people are going through in the streets,” White said in early April. “Some people are like ‘are we being lab rats?’ They still want to get the vaccine, but it’s this weird feeling.”

An Albany Supreme Court judge ruled in March that New York’s incarcerated population is fully eligible for COVID-19 vaccines. But several incarcerated people, loved ones and advocates said there isn’t enough education about the vaccines in prisons, which has eroded trust among prison populations.

Inside facilities where inconsistent COVID-19 procedures have persisted for more than a year, incarcerated people receive information about vaccines through fliers and Inmate Liaison Committees. Each prison has an ILC, a group of incarcerated people elected by the prison’s population to meet with administrators, air grievances and relay information back to the general population.

They also get information from loved ones, cable news and articles they can download onto tablets.

“The problem is that the central office in Albany leaves it up to the individual superintendents on how they’re going to disseminate the information,” said Herbert Morales, a fellow at the Correctional Association of New York, a nonprofit prison monitoring group. “And the information isn’t getting to these men and women. They’re getting it basically from (loved ones) on the phone … and a lot of times it isn’t reliable information.”

New York’s incarcerated population is disproportionately Black and Latino, populations whose distrust of the vaccine is often rooted in a history of medical malpractice, including experimentation. 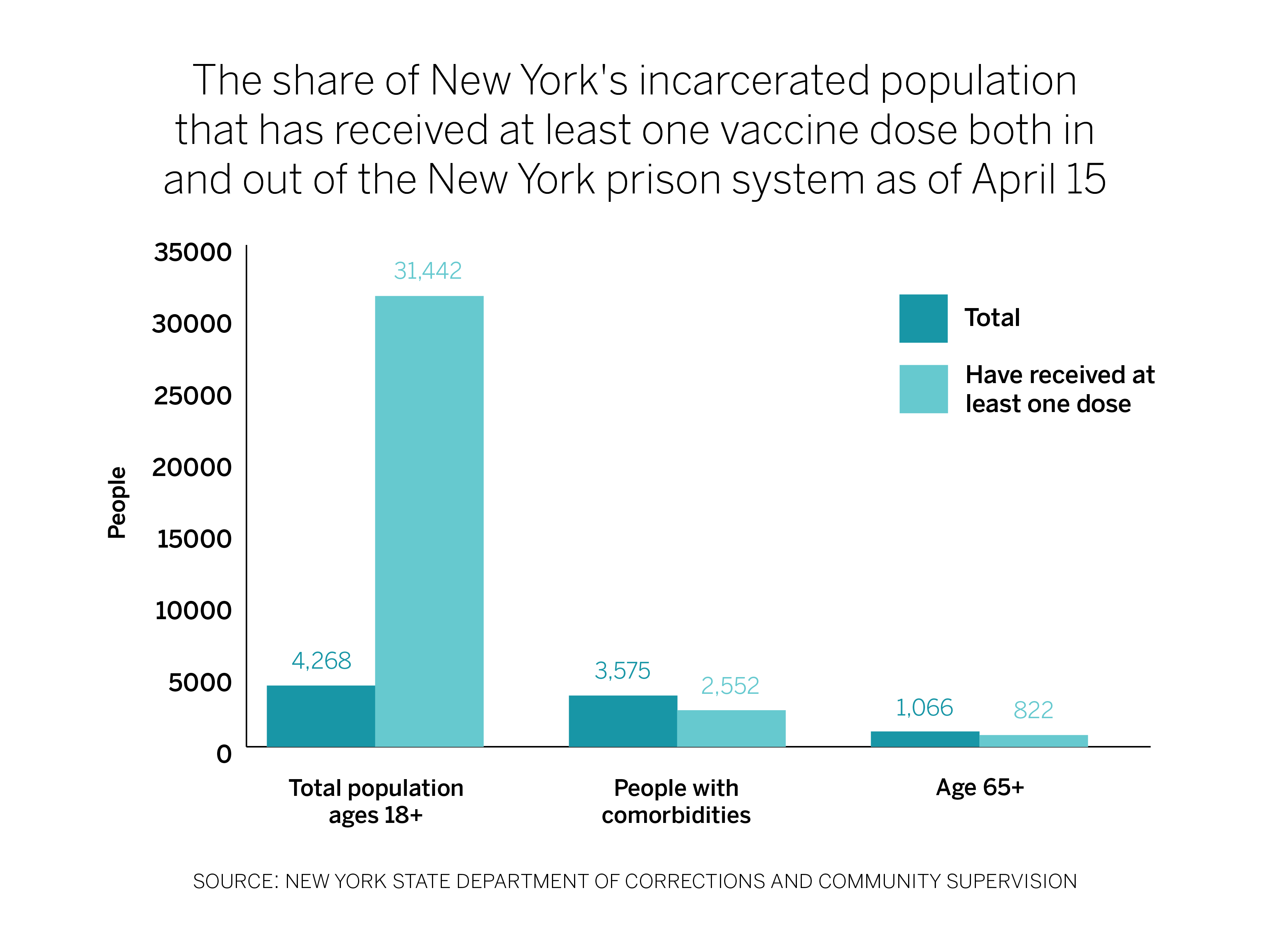 In American prisons, where forms of medical experimentation date back to the 1960s, prisoners have a higher rate of preexisting conditions. They have less access to medical information. They don’t have a choice of vaccine brand. And they’re forced to receive the shot from medical staffs that have long been a source of tension, records and interview shows.

In February and March, small patches of New York’s prison population became eligible: the first group — those over 65 — could get the vaccine in early February. About 77% received a dose by April 15, a spokesperson for the Department of Corrections and Community Supervision said in an email.

Just over 70% of those with eligible comorbidities received a dose by April 15, per the corrections department.

Those numbers mirror vaccination rates across the state. But as eligibility expands to younger populations, hesitation will likely increase, several representatives from the Correctional Association of New York said.

“Men and women inside have convoluted information. As the younger populations are eligible to see it, that’s going to be the hesitancies,” said Tyrrell Muhammad, a senior advocate at the correctional association. “The older populations are taking it because they want to live. But if I’m 40, I’m 30, I’m 25, I believe I can live forever. I’m indestructible. So I’m not taking that.”

Prisons started distributing the Johnson & Johnson vaccine on April 6, and 894 more incarcerated people had received it by April 15. The corrections department halted its distribution amid guidance from the federal government about rare vaccine complications.

Some people, like White, are still awaiting the vaccine due to the Johnson & Johnson pause. Others, like Laquavia Jones, incarcerated in the all-women’s Taconic Correctional Facility in Westchester County, don’t plan on receiving it at all.

“(A) majority of the women in here say that they will not take the vaccination,” she wrote in an email to The Daily Orange in early April. “I know that some of the elderly population received it and a few others, but from my knowledge and understanding, the vaccine isn’t such a hot commodity in here.”

Still, many are skeptical.

“In here, people are walking around without their mask on a majority of the day. (Both) staff and inmates. So it’s a joke. It’s only serious when it’s convenient,” said White. “It’s like, on paper, ‘ya ya ya we care,’ but then how it’s practiced out, it doesn’t make sense.”

Anthony Annucci, acting commissioner for the corrections department, sent a memorandum to all New York prisons on March 30, days after the judge ruled in favor of full vaccine eligibility in prisons.

He explained that the Moderna and Pfizer vaccines require two doses, and the Johnson & Johnson requires one dose, according to a copy obtained through a public records request. The corrections department was organizing vaccination clinics at each of its facilities, he said.

“By getting vaccinated and following COVID-19 guidelines, you will be a vital part of the solution to prevent the spread of this virus,” Annucci wrote.

Vaccine Memos by The Daily Orange

A few days after reading the memo, Nyia Mercado was frustrated.

“The people haven’t actually come and had a conversation with us. We have an (Inmate Liaison) Committee here, (but) they’re not very informative,” she said in early April from Taconic Correctional Facility, where she’s incarcerated.

Mercado was never fond of vaccines. The first time she took a flu vaccine was across the street, at the maximum-security Bedford Hills Correctional Facility, so she could start a job in the prison’s nursery. She transferred to Taconic last July after a coronavirus outbreak swept through Bedford Hills, and for the past nine months she has mostly stayed in her dorm.

Her most regular sources of information are cable news, family members who also don’t trust the vaccine, and the ILC, which she said has not been very informative. She’s resorted to self-isolation and cleaning instead.

“I don’t trust the medical staff. I don’t trust the people administering it to me. Maybe when I go home I’ll have a different view because I’ll be able to do my own research,” she said. “But right now, no. Absolutely not.”

ILC meeting minutes and notes The D.O. obtained through public records requests show communication gaps between incarcerated people and some medical staff throughout the pandemic. Many of the 18 prisons that released notes show inconsistent or questionable COVID-19 procedures, including using solitary confinement for medical isolation and having incarcerated people send public records requests to get COVID-19 test results back. Some ILCs told administrators that they lacked readily available cleaning supplies.

Much of this is a result of top-down policies the corrections department administers to prisons across the state. Other issues — including some staff not wearing masks or miscommunications about medical procedures — come from a lack of communication between staff and the general population at individual prisons.

“The ILC has been overwhelmed with complaints relating to memorandums issued by the Commissioner’s office that are understandably beyond this facility’s purview,” Sing Sing Correctional Facility’s ILC told administrators in a January meeting. 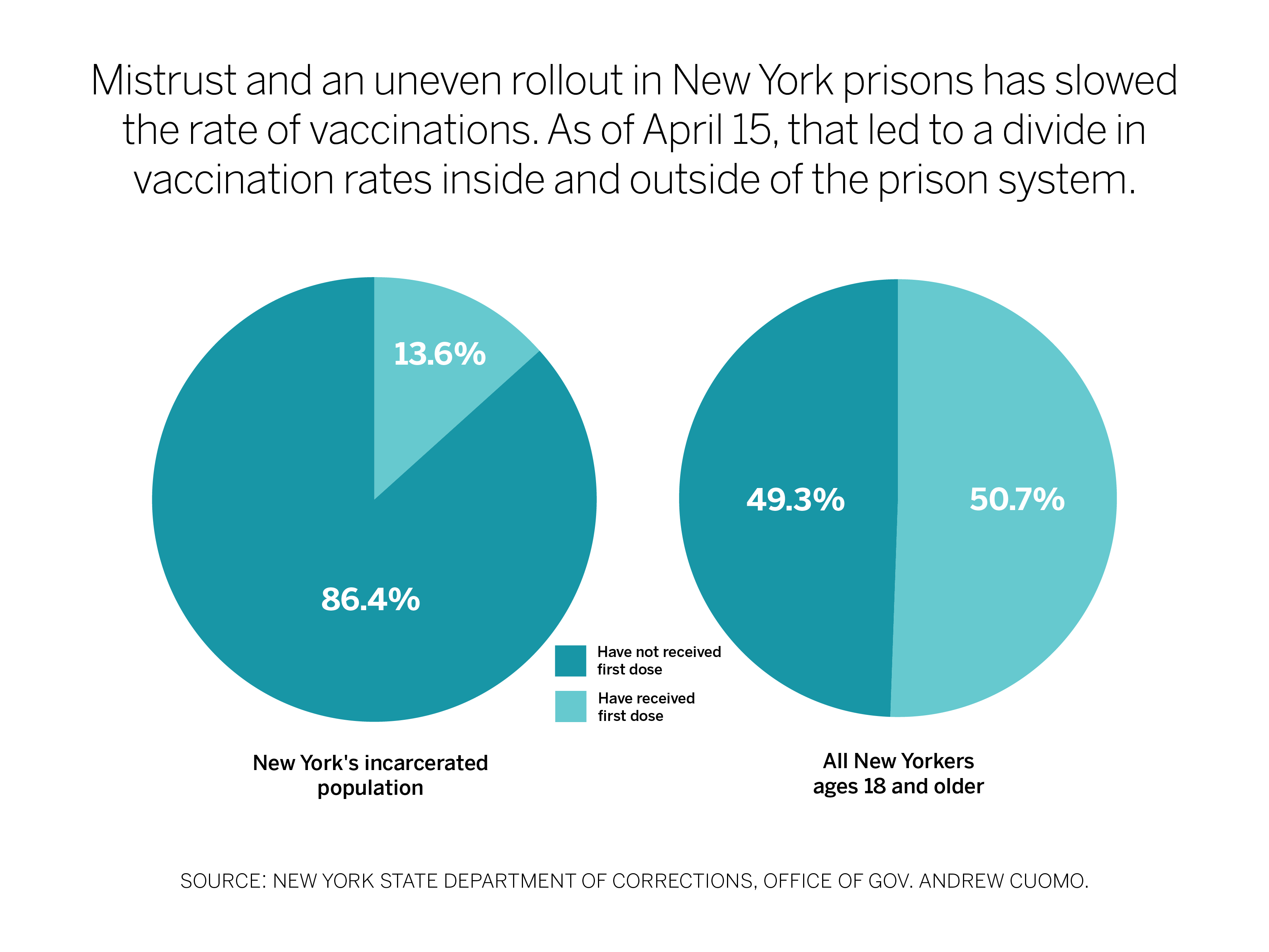 When Morales, of the Correctional Association of New York, went to Sullivan Correctional Facility in late March for a monitoring visit, he walked around the maximum-security prison and talked with many men who still had questions about the vaccine.

One person he met had five bottles of medication, Morales said. He told Morales that it now takes months to schedule a refill. He wanted to take the vaccine, but still doesn’t know if it will affect his heart medication. The man asked medical staff several times and has yet to receive a clear answer, Morales said.

When Morales was incarcerated in New York prisons for 33 years, he used to examine packs of Tylenol front and back to make sure they were legitimate. He often did not trust the medical staff at the prisons he spent time in.

“We always (had) the fear that they would experiment with us,” Morales said.

He ran into many men at Sullivan with similar concerns about the vaccine. But Morales told them he was taking it, which he said restored some of their trust.

“Guys that saw me and know that I’m formerly incarcerated, when they asked me, ‘Did you take the vaccine?’ and I said ‘Yes,’ their response was ‘I don’t need to know any more. If you took it, I know I can take it,’” Morales said.

In March 2020, when state prisons initially suspended internal programs and visitation, Capra organized town halls in the prison’s chapel to answer questions incarcerated people had about the virus. ILC committee members, program coordinators and leaders from religious and cultural groups were all present at the meeting, Morales said.

According to Morales and a recent account in The Marshall Project, a nonprofit newsroom covering criminal justice, Capra would outline his concerns about the virus and then take questions from the men inside the prison.

This could be a model for prisons across the state, Morales said — but he added that Capra is a “rare breed.”

“It isn’t so (much as) they’re declining it, they’re asking for more follow-up information,” Morales said of the widespread hesitations. “How would this vaccine affect the medical treatment and the current medications that I’m taking? And especially if you’ve had a stroke or if you’re taking life-saving heart medication, you want to know if you’re putting something else in your body. Will that affect the medication that I’m taking? Would it affect the efficiency of the vaccine working? And they’re not getting that proper feedback.”

These were some of the questions that Mercado had asked. She said she never got adequate answers.

In mid-April, she tested positive for COVID-19 and moved to a quarantine unit.

“I’m doing okay… Just a minor headache,” she wrote in an email to The D.O. on April 13. “Im grateful for that because I have asthma, so this is a blessing.”

SU reports 29 active COVID-19 cases on Tuesday, an increase of 1

Blueprint 15 formed partially in response to concerns around displacement that could result from the impending Interstate-81 removal project. END_OF_DOCUMENT_TOKEN_TO_BE_REPLACED

The vigil started with a speech and introduction by Nia Williams and Jacob McGraw, peer educators of the STOP Bias and Hate Initiative. END_OF_DOCUMENT_TOKEN_TO_BE_REPLACED

Neal Powless spoke with The Daily Orange on what he has changed in the program since the 2019-2020 report. END_OF_DOCUMENT_TOKEN_TO_BE_REPLACED