Buddy remembered which games Syracuse won and which it lost. The tapes with the most wear and tear were some of the biggest wins SU had in Buddy’s lifetime.

“If it was one I really liked, like the (2003) national championship game, that whole run I watched those games seven, eight times,” Buddy said. “All day. And just relived the games because that was my life growing up.”

Buddy, the son of Hall of Famer and Syracuse head coach Jim Boeheim, has been an SU fan as long as he can remember. The team he admired for 18 years trained him all the while. Players he viewed as heroes turned into mentors and his father morphed into a coach. Years around the program directed Buddy to SU, but invaluable instruction has prepared him for a freshman season on Jim Boeheim Court.

“It’s something I’ve watched and thought about my whole life and pictured in my head,” Buddy said, of playing for Syracuse. “So I feel like I’m more ready than a lot of guys usually are because I’ve been around it so much.”

Buddy’s mother, Juli, knew what a Syracuse loss meant for her youngest son. Tears. Lots of tears. She and Buddy often waited outside the locker room while Buddy had “a big two- to three-hour cry,” Juli said. Buddy needed to see his father. And then he’d cry all over again.

In sixth and seventh grade, when last names were added to jerseys, Buddy’s connection to his dad was more apparent than ever.

People expected him to be the best player on the court, and Buddy himself wanted to live up to the Boeheim name. But at the time, he wasn’t even in the starting lineup. 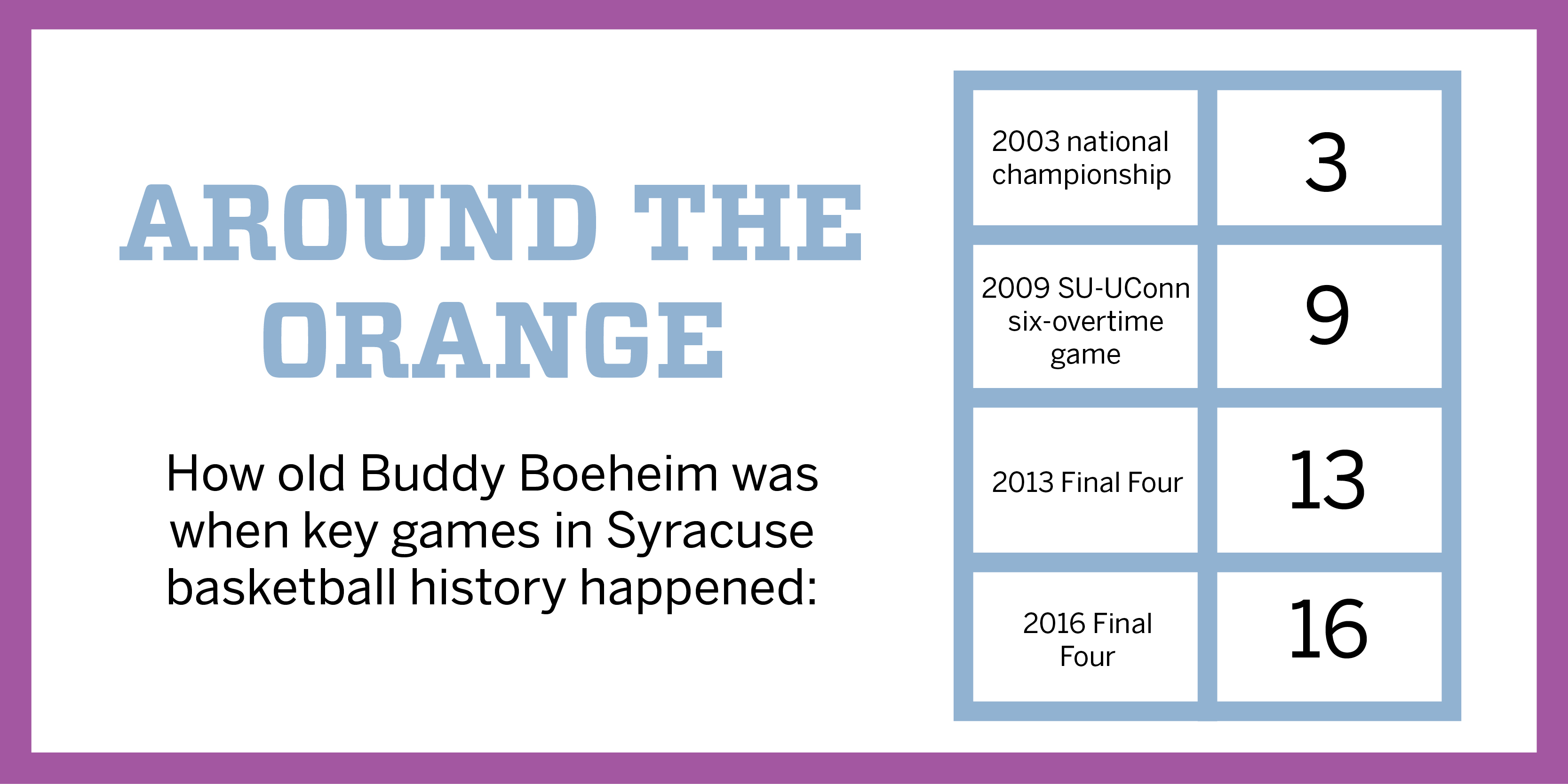 After some bad games, Buddy walked out to the car and cried or threw things. He didn’t think then that he’d ever contribute at his dream school. Maybe he’d be a walk-on, or come to Syracuse because he always wanted to. Not because he deserved it.

As Buddy’s self-doubt manifested, his father propped him up.

“He would see my crying after games, and he’d tell me I’m gonna be the best player in the area someday,” Buddy said. “And that just stuck out, always reminded me every now and then that he always believed in me.”

Once Buddy grew out of the pressure, he proved he was a top-level recruit. But Buddy went into the summer after his junior year without an SU offer. Then, Boeheim’s assistants came to his office and implored him to grant Buddy a spot, Juli said. After only a bit of discussion at home, Boeheim agreed. Buddy had earned it.

“I wouldn’t have pushed through that (without him),” Buddy said. “Just keeping me motivated at all times, even if I was struggling.”

Over time, the legends of Syracuse basketball folklore became Buddy’s personal coaches. Beginning in seventh grade, Buddy worked out with Devendorf when he returned for summers while playing overseas.

Devendorf didn’t touch Buddy’s jump shot — it was already “unbelievable,” he said. McNamara compared it to NBA All-Star Klay Thompson’s. So, Devendorf and Buddy worked on other aspects of his game.

“Trying to give him little secrets here and there,” Devendorf said. “Putting the ball on the ground and just having confidence in himself.”

The two guards played each other one-on-one. Buddy never won, he said. But the passion and intensity Devendorf trained with rubbed off on Buddy. And that relationship helped Buddy as pressure mounted.

When it wasn’t easy to talk to the source of the pressure, Buddy had another outlet. Devendorf had played in front of packed collegiate arenas around the country. He knew what it was like to have people counting on you, even if he couldn’t relate exactly to what Buddy dealt with.

“When your dad is a Hall of Fame coach, expectations can be pretty high,” Devendorf said. “People can put a lot of nonsense out there. You have a bad game, you have a good game, they’re always gonna have something to say.”

Devendorf took a position as special assistant to the head coach at University of Detroit Mercy after working on SU’s strength staff.

But McNamara remains one of Boeheim’s assistants, and he’s worked with Buddy to expand beyond his jump shot. He puts it on the floor better now, McNamara said, and has started to make second-level reads off of drives.

When McNamara arrived at Syracuse in 2002, he saw Buddy in diapers. Sixteen years later, SU’s all-time leader in 3-pointers made is afraid to challenge that same kid to a shooting contest. 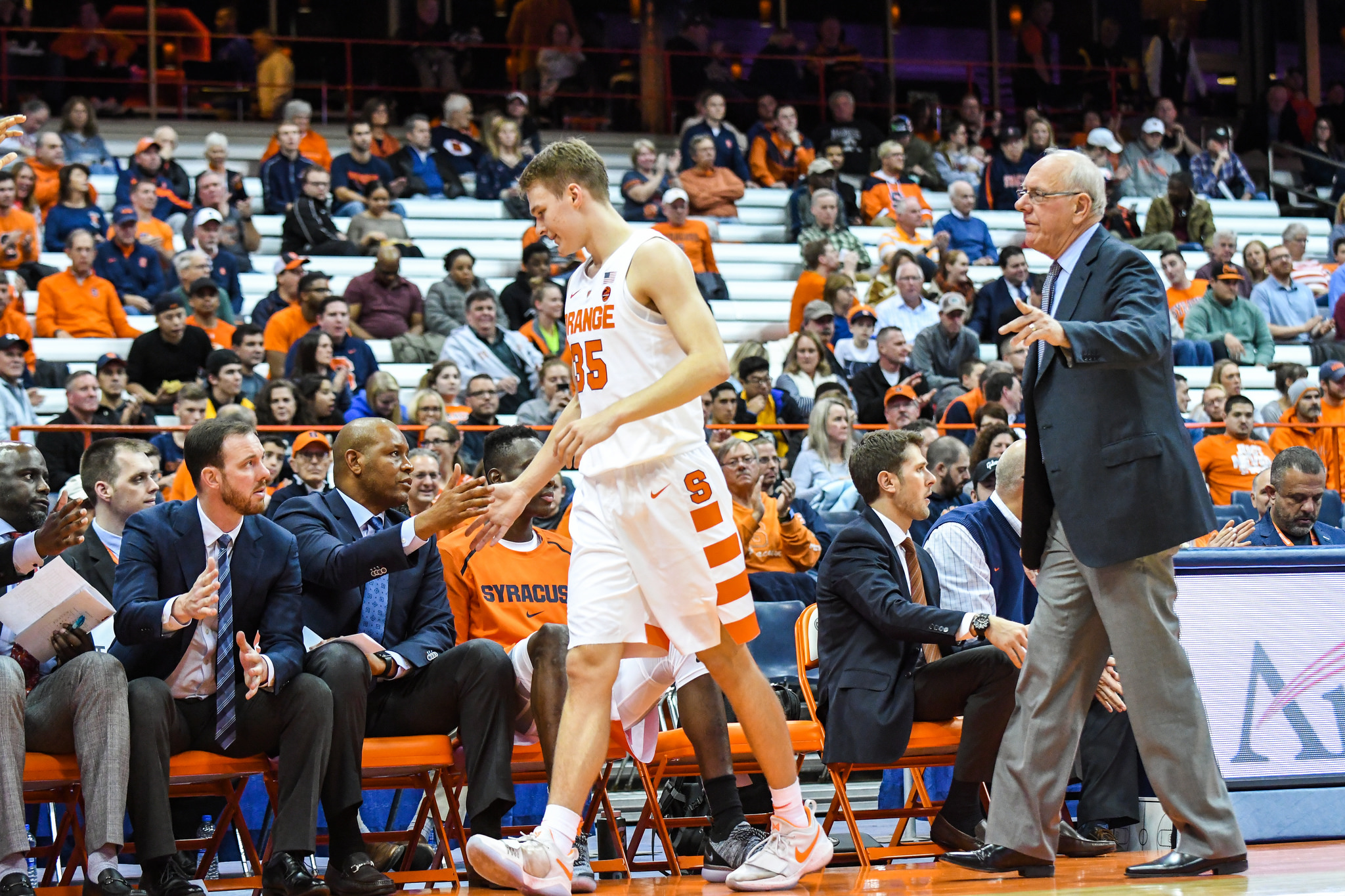 Buddy and Devendorf still text every few weeks. Not everyone has the opportunity for relationships growing up with players like McNamara and Devendorf, Buddy said.

“Without their advice and telling me what I need to focus on, I don’t think I would really be here and be the player I am today,” Buddy said.

At ACC Media Day on Oct. 24, Boeheim said he plans to play nine guys. Buddy is the ninth man. In Syracuse’s first scrimmage, Buddy started and scored 19 points with multiple SU guards missing out due to injury.

Whenever the first regular-season minutes come for Buddy, he’ll be revitalizing an old last name-number combination. From 1962 to 1966, when Boeheim played for the Orange, he wore the number 35, which Buddy will do this season. He picked the number in eighth grade, before he knew it had been his dad’s collegiate number. Buddy just liked the number, he said. But he was glad to keep wearing it, and to wear it at Syracuse, after he learned in high school about the number’s history in his family.

“He’s my inspiration for why I’m here,” Buddy said. “And a big part of it besides my love for the game. I wouldn’t be here without him.”

McNamara said that Buddy’s early playing time will be dictated by his shooting. The 6-foot-5 guard comes in with a reputation as a sharp-shooter, and Syracuse struggled from the 3-point range last season, making 31.8 percent of its shots from behind the arc. In the 2017 Nike Elite Youth Basketball League, Buddy shot 55.6 percent from 3-point land.

For years, Buddy has reaped the benefits of a Syracuse basketball player. He’s traveled to conference tournaments and played in the Melo Center since its inception. He’s received personal tutelage from each member of the coaching staff. Still, one thing might be weird for Buddy, he said, at least the first time.

Sometime this season, his dad will point down the bench as Buddy has seen him do hundreds of times before. But this time, Boeheim will be pointing at another Boeheim.