Chief Bobby Maldonado’s office in Sims Hall holds a collection of hats from his years working in law enforcement and growing up in New York.

By Christopher ScarglatoSenior Staff Writer
November 18, 2021 at 2:03 am

In a temporary Sims Hall office that Bobby Maldonado will leave by the end of December, the Syracuse University Chief of the Department of Public Safety showed off his hats.

On the front of his desk sits a New York state police trooper hat, representing his start in law enforcement and the two decades he spent with the department. Laying on the window sill is a gift from a friend, a New York Police Department baseball cap, which serves as a remnant from Maldonado’s time growing up in The Bronx, New York. The headwear used to hang up in his other office, all lined up in a row. But in his new one, with his policing days ticking away, Maldonado has them just laying around.

A third hat, perched next to the NYPD hat, is a DPS hat. Last January, Maldonado announced his retirement after a law enforcement career that has spanned 40 years — six of which he spent as the university’s DPS chief. Maldonado planned to retire on Aug. 1, but SU officials asked him to stay longer because they had not yet hired a replacement. Maldonado obliged, and he will officially leave his position as the head of campus public safety on Dec. 31.

Throughout a career that took him from The Bronx to Albany to Rochester and finally to Syracuse, Maldonado gravitated his mindset toward community policing. The chief said he tried to expand DPS to have positive interactions with students and create a more diverse environment by recruiting people of color into campus public safety.

But during Maldonado’s six-year tenure, students have criticized DPS’ reactions to hate crimes on campus and the department’s response to the #NotAgainSU protests at the Barnes Center at The Arch and Crouse-Hinds Hall.

Maldonado said he welcomed Loretta Lynch’s report, a year-long investigation into DPS, as an act of transparency. The report outlines 23 recommendations for changes within the department.

As an introvert, Maldonado grew to understand his own position, his leadership style, and he said others won’t always agree with him. He said he encourages debate, carving out time to listen and talk with those he serves.

He learned all this with the different hats he’s worn. 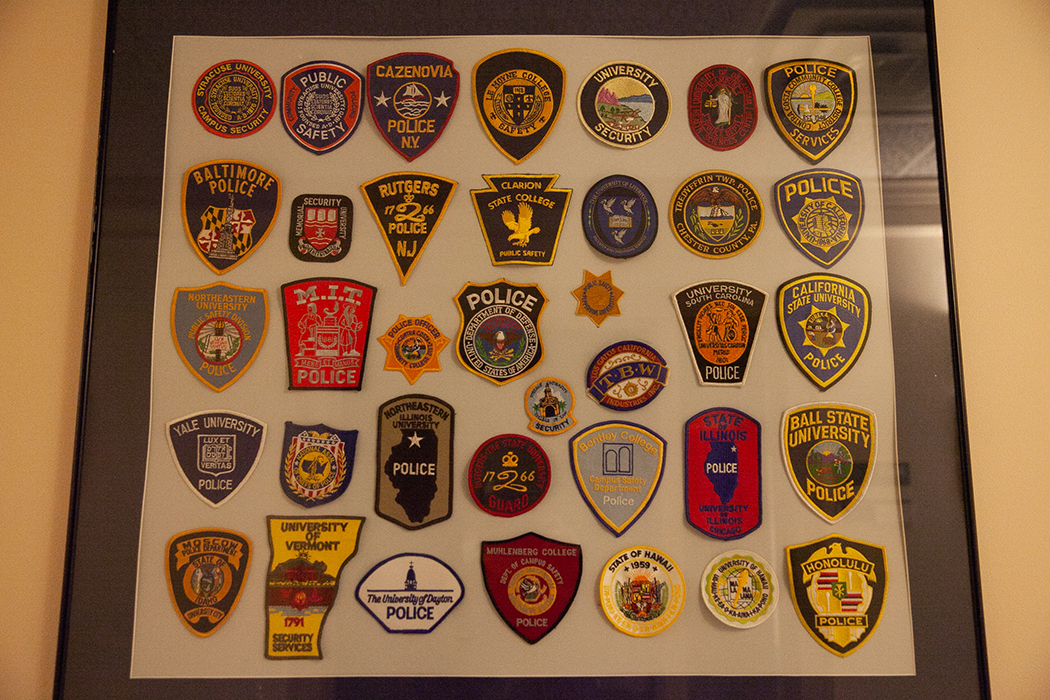 From trooper, to captain, to chief

Standing inside a former girlfriend’s apartment in 1980, Maldonado spotted an application for the New York State Police on a table.

“What’s up with this?” Maldonado recalled asking.

“A trooper handed it to me,” the former girlfriend responded.

The former girlfriend had no interest in it, and Maldonado didn’t want to become a cop at first, either. He applied anyway. Needing to pay off student loans from Cornell University, he took tests needed to enter both the NYPD and New York State Police. His phone later rang with two calls, asking to join both agencies. Maldonado chose the state police as a way to move out of NYC and try out living upstate.

On Oct. 19, 1981, Maldonado was already in Albany, over two hours away from home, for his first day at the state police academy. By April, he graduated and started his first assignment in Williamson, New York, as a road trooper.

Nearly two years later, Maldonado began to bounce from opportunity to opportunity. One came up in 1983, when he had the chance to join the narcotics department, where he stayed for about 10 years. “The most fruitful time of my career,” Maldonado recalled.

He later moved to investigator, then to senior investigator, to lieutenant, and eventually to captain, and he transferred to the state’s Bureau of Criminal Investigations for the rest of his tenure with the state police. Along the way, he married his wife, Gina, and raised a family that stayed in the Rochester area no matter where he was called to across the state, she said.

After serving as the city of Rochester’s deputy chief and an adjunct professor at the Rochester Institute of Technology, Maldonado set out for a new challenge — college campus safety.

As “a student of law enforcement” for years, Maldonado said he studied Herman Goldstein, the “father” of community policing. Maldonado believed the same philosophy could be used on a college campus — just like it could with the state police and his other roles.

Being the chief of public safety was meant for him —  it was in his DNA from being in the state police, said Joaquin Aymerich, Maldonado’s former partner in the agency’s narcotics unit. Nine years at Nazareth College as its campus safety director set up Maldonado for his time at Syracuse. In July 2015, he became SU’s Chief of DPS.

“I was looking for a challenge,” Maldonado said. “I certainly got it.” 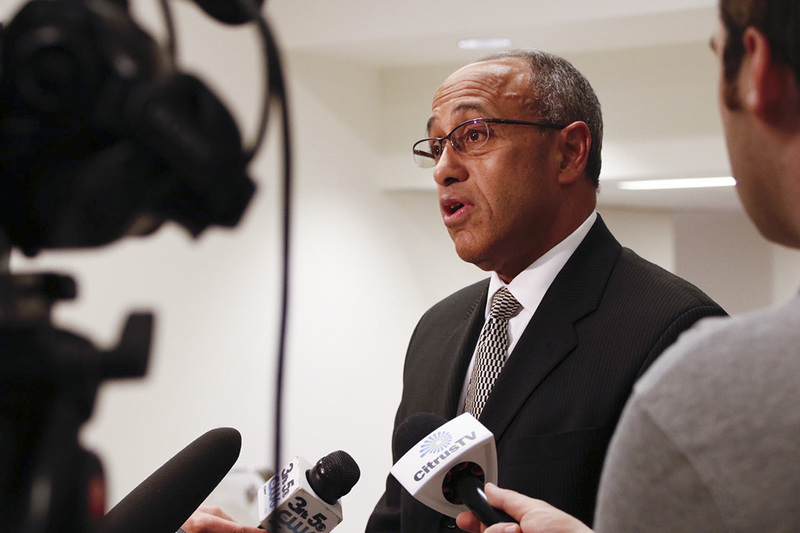 Members of Syracuse University’s Student of Color Advisory Committee, co-chaired by Maldonado, wanted to be more than listened to following the hate crimes that took place in fall 2019. Elizabeth Billman | Senior Staff Photographer

When Kate Abogado checked her phone in spring 2019, an email popped up. It was a nomination — DPS wanted her to be on an advisory board that would be co-chaired by its chief, Maldonado.

During his career, Maldonado, who is Puerto Rican, said he eventually wanted to end up in the position where he could contribute back to other people of color, especially students. A chance came when DPS created a Student of Color Advisory Committee in response to criticism from students about communication of a reported assault on Ackerman Avenue in February 2019.

About a dozen students, including Abogado, volunteered to be on the board. Then a senior, the now-SU alumna served as the committee’s co-chair. Several other SU officials were also on the board.

In the beginning of fall 2019, Abogado met with Maldonado and talked about her expectations for the group. Maldonado told her that the committee’s role would be purely advisory.

“The most ironic part of it was we never really felt (they) asked for advice,” Abogado said. “We were never asked like ‘Oh, what would make students of color feel more protected and more safe on this campus?’ None of those questions were ever asked.”

Abogado estimated the two’s first chat was early in the semester — either August or early September, but the committee’s first meeting didn’t happen until October. Both Abogado and Maldonado said he attended each meeting.

“He was very agreeable,” Abogado said.

The two admitted it was challenging to get every member of the committee in a room with different schedules, with sometimes Maldonado showing up as the only official and about half of the student group being in attendance. After meetings ended at Sims Hall, though, Abogado recalled student members saying they felt like they weren’t truly being listened to.

The group only had a handful of meetings — including three or four emergency ones when racist graffiti was found in Day Hall and other hate crimes and bias-related incidents occurred on and near SU’s campus. Students’ mindsets began to shift.

“The biggest was the hate crimes (that happened), so that was always the focus,” Abogado said. “Eventually the attitude of the committee was that our time was better spent supporting our peers at the Barnes protest.”

While at the Barnes Center during the first night of protests, Abogado’s phone buzzed. Maldonado called and asked if she was there. She responded yes. The chief then stated DPS officers would come in to check IDs and make sure everyone in the protest’s attendance belonged to the university for their safety.

Abogado objected, citing it would be counterintuitive and frighten people — make protesters scared that they would get suspended, arrested or have their names noted down. Maldonado didn’t budge.

“This is my job,” Abogado recalled him saying.

“I had to remember what my mission was and what my charge was — and that was to keep the campus community safe,” Maldonado said two years later. “I don’t think I could ever deviate from that. Maybe the expectation of some students (was) that I should understand more, or stand with them in solidarity. But my main focus is to keep them safe.”

After Nov. 2019, the committee was disbanded. 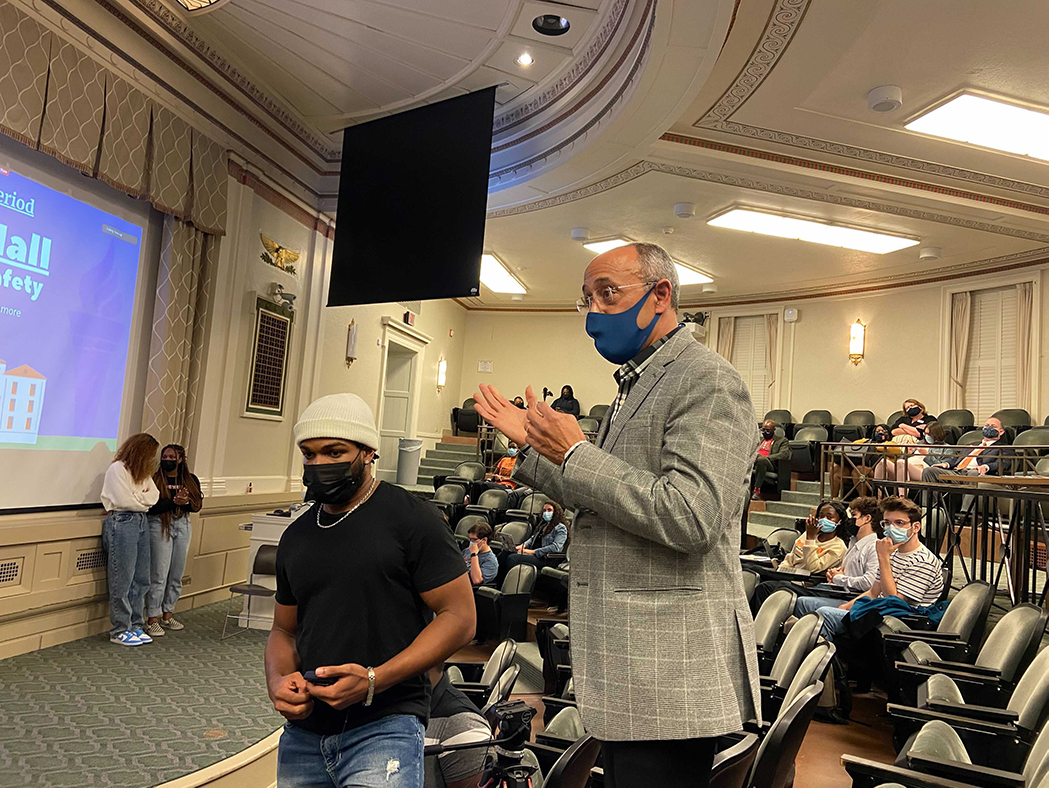 Bobby Maldonado, chief of Syracuse University’s Department of Public Safety, adopted a policy of community policing during his time at the university. This included working with students and speaking with them at town halls. Karoline Leonard | Asst. News Editor

After the assault on Marshall Street in October of this year, Student Association President David Bruen wanted officials to attend a town hall regarding the incident. The discussion was less than 48 hours away, so Bruen sent out a blast email. Maldonado was one of the first and only ones to reply.

Bruen soon hopped on the phone with Maldonado, chatted with the chief and stepped into Sims Hall for a one-on-one meeting. Later, Maldonado showed up at the discussion, sat down among students inside Maxwell Auditorium, fielded questions and informed attendees about the assault.

Two years ago, Maldonado did the same type of community policing among students at the Barnes Center. The chief said he met with groups as an effort to understand what they were protesting about. Those same protestors demanded his letter of resignation, with one calling him “incompetent” at his job for mismanaging race-relations at SU.

In his final semester, Maldonado has stayed busy, still trying to interact with students and other members of the campus community. In part, he has been aiming to finish instating Lynch’s 23 recommendations — shown by a three-ring binder filled with the report on his desk. He admitted some goals, including reviving the Student of Color Advisory committee, would have to be left for the next chief.

When he retires, the soon-to-be-former cop plans to keep on meditating, reading more and not waking up early anymore to workout at 5:45 a.m. His nights and sleep schedule will no longer be dictated by pagers, phone calls and texts. After 40 years, those will all be turned off. Gina said she can’t wait. Teisha Hyman went into the locker room at halftime with half of Syracuse’s points. She added six more points in the second half. END_OF_DOCUMENT_TOKEN_TO_BE_REPLACED

Blueprint 15 formed partially in response to concerns around displacement that could result from the impending Interstate-81 removal project. END_OF_DOCUMENT_TOKEN_TO_BE_REPLACED

Neal Powless spoke with The Daily Orange on what he has changed in the program since the 2019-2020 report. END_OF_DOCUMENT_TOKEN_TO_BE_REPLACED