After years of attempting to mark the unmarked graves of Black Civil War veterans in Oakwood Cemetery, the Historic Oakwood Cemetery Preservation Association succeeded this year.

The initial event served as a launching point for the association’s larger project of marking all unmarked Civil War veterans’ graves.

David Haas, the owner and creator of the Instagram account @syracusehistory and organizer for the event, shared his experience on his collaboration with HOCPA members who made the ceremony successful.

Haas has been a part of HOCPA for a few years, along with Sue Greenhagen, a retired academic librarian at SUNY Morrisville. Last winter, Greenhagen mentioned to other HOCPA members that some of the Black Civil War veterans in Oakwood Cemetery do not have tombstones.

There are 75-80 Civil War veterans with unmarked graves, 10 of whom are Black, Greenhagen said.

Greenhagen approached the U.S. Department of Veterans Affairs marker program in past years to obtain tombstones for the unmarked veterans, but the VA never approved her requests and had a difficult and extensive process for approving them, she said. Because of this, Haas decided to approach the task differently. 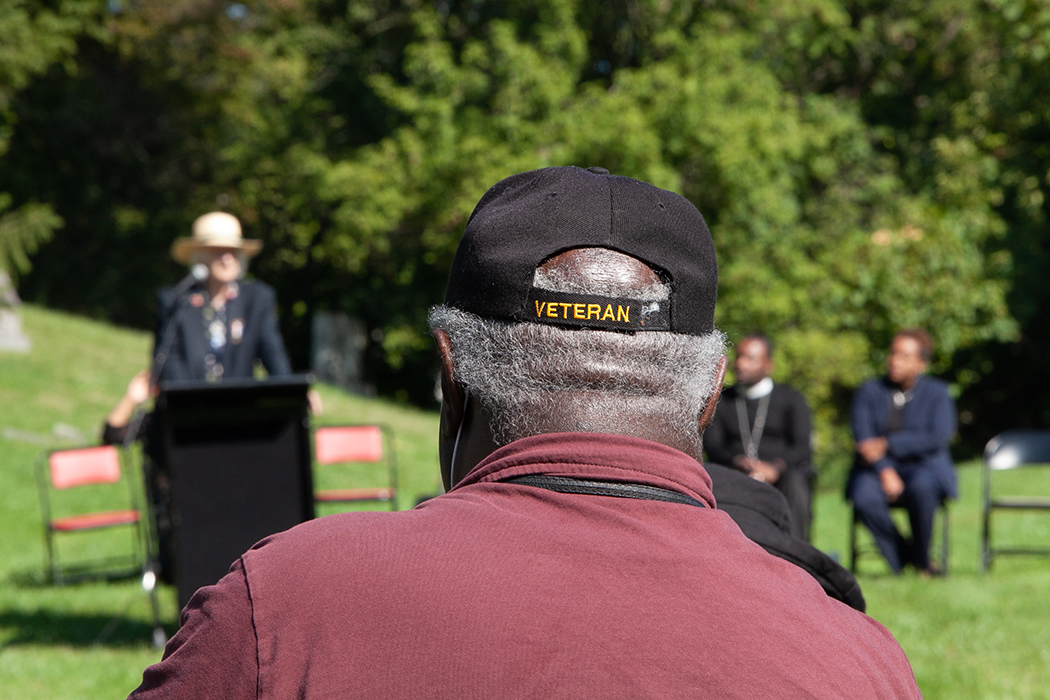 Through his Instagram account, Haas started a campaign in January 2021, selling over 250 T-shirts. The proceeds from his campaign went to tombstones for unmarked veterans, including one for Jameson. HOCPA ordered four tombstones, but only one, Jameson’s, was accurate. The association decided to hold the event for Jameson first as part of a larger project for the future.

Robert Searing, the curator of history at the Onondaga Historical Association, discussed the significance of Black soldiers during the Civil War.

Searing said that Syracuse sent at least 30 Black soldiers into the Civil War out of the approximately 12,500 troops that Onondaga County mustered between 1861 and 1865.

“As soon as they were able, they went and fought. It helped turn the tide of the war. Once the war became about the abolition of slavery and once Black men were allowed to fight in the army, that changed the course of history,” Searing said.

Jameson was just one example of a Black American  who contributed to the Civil War, Searing said.

“James Jameson is a fine example of the African American men, when they were finally allowed to (fight in the army) … they took up arms to fight for the freedom of the three or four million of their fellow Black brothers and sisters,” Searing said.

The lack of tombstones has to do with how much the monuments cost at the time, Searing said.

“Most African American folks living in Syracuse (were) living a subsistence life, to the idea that when they’d pass away, it wasn’t something that was granted,” he said.

In the pool of verified soldiers, Greenhagen recognized that there were 75-80 soldiers who did not have tombstones.

“It bothered me that they didn’t (have tombstones). We were thrilled to find out that we actually had a member of the 54th Massachusetts, Jameson. In addition, up in the Civil War section, there’s one of his comrades,” Greenhagen said.

Charles Creamer, who was a soldier in the same regiment as Jameson, was buried in the Civil War section in Oakwood Cemetery with recognition and a marked tombstone. He was a member of the Grand Army of the Republic, which was a fraternal organization that looked out for the veterans, so he made arrangements to be buried in the GAR plot.

“I don’t know why Jameson didn’t get a headstone. He wasn’t married, so he didn’t have any children. He died in the 1920s … it was the circumstances. He just wound up without a headstone,” Greenhagen said.

Rick Naylor, the president of HOCPA, shared some difficulties when obtaining the tombstones.

“We got to go back to the VA and order the (three) stones that were not correct. That happens fairly (often) … The last few months, we’ve been very busy coming back from COVID, trying to get tours and public awareness. So, there are no plans as of yet,” Naylor said.

Haas, Greenhagen and Naylor said they will continue to work on this project to obtain tombstones for the unmarked veterans to honor their bravery and lives.

The Syracuse Christmas tree lighting returns after a 1-year hiatus Syracuse University released its Diversity, Equity, Inclusion and Accessibility draft plan in October, and its review and feedback process was extended to Dec. 3. END_OF_DOCUMENT_TOKEN_TO_BE_REPLACED

Though cooking in college can be challenging, meal prepping with the “rule of threes” can simplify healthy eating. END_OF_DOCUMENT_TOKEN_TO_BE_REPLACED

Swastika drawn in snow across from 505 on Walnut