Jonathan is working on a picture book to explain the history and importance of beadwork to Tuscarora culture.

Grant Jonathan first learned beadwork from his mother when he was 19 years old, which he told the audience in the Shaffer Art Building was a “late start.” He later took advanced beadwork classes from seasoned Tuscarora beadwork artist, teacher and mentor Rosemary Hill, who was also in the audience at his Artist Talk on Tuesday afternoon.

He affectionately addressed her as “Rosie” throughout the presentation. “I like to tease her a lot,” he joked.

Jonathan is part of the Tuscarora nation and is a Tuscarora beadwork artist, collector and supplier based in New York City. The artist primarily works as an Environmental Protection Agency lawyer for the Region 2 Indian Nations Program.

On Tuesday afternoon, Jonathan showed a PowerPoint presentation on Tuscarora raised beadwork history and included dozens of photo examples of past and present beadwork art, some of which was his own. Two of Jonathan’s works, “Resilience” and “Santa Fe Pincushion,” are currently on display at the Syracuse University Art Museum in the exhibit “Each One, Inspired,” which will be on display until Nov. 19. The exhibition is a presentation of over 52 contemporary Haudenosaunee artworks and their various sources of inspiration, according to the SU events webpage.

Throughout the presentation, and with every image he presented — whether a historic photograph of ancestors or photo examples of beadwork art — he went in depth about its background, illustrating his passion for the topic. The knowledge energized him, and he paced back and forth across the lecture hall as he pointed out small details, like the “odd bead” in an antique piece, to the audience.

Jonathan said he also owns a collection of over 2,200 pieces of art that he said he acquired through auctions, online purchases, flea markets and from other collectors who were downsizing. One of these pieces was a snowflake pin cushion dating from the 1870s, which he passed around during the presentation.

The snowflake, no bigger than the palm of a hand, had a border of clear beads embroidered around its six corners. Its inner branches were also intricately beaded around a rust-red core.

Emily Dittman, the museum’s associate director, said the Artist Talk series promotes the best method of learning about art that is on display — hearing it from creators themselves. Dittman said she hopes that SU students will be inspired from hearing about the artwork in this way and appreciate traditional artwork with contemporary techniques, she said.

“Especially for this exhibition, the work of all the different artists is about sharing inspiration and mentorship,” Dittman said. “So many of the artists at the show know each other personally, so talking about their connections and community and how that affects their artwork is really important as well.” 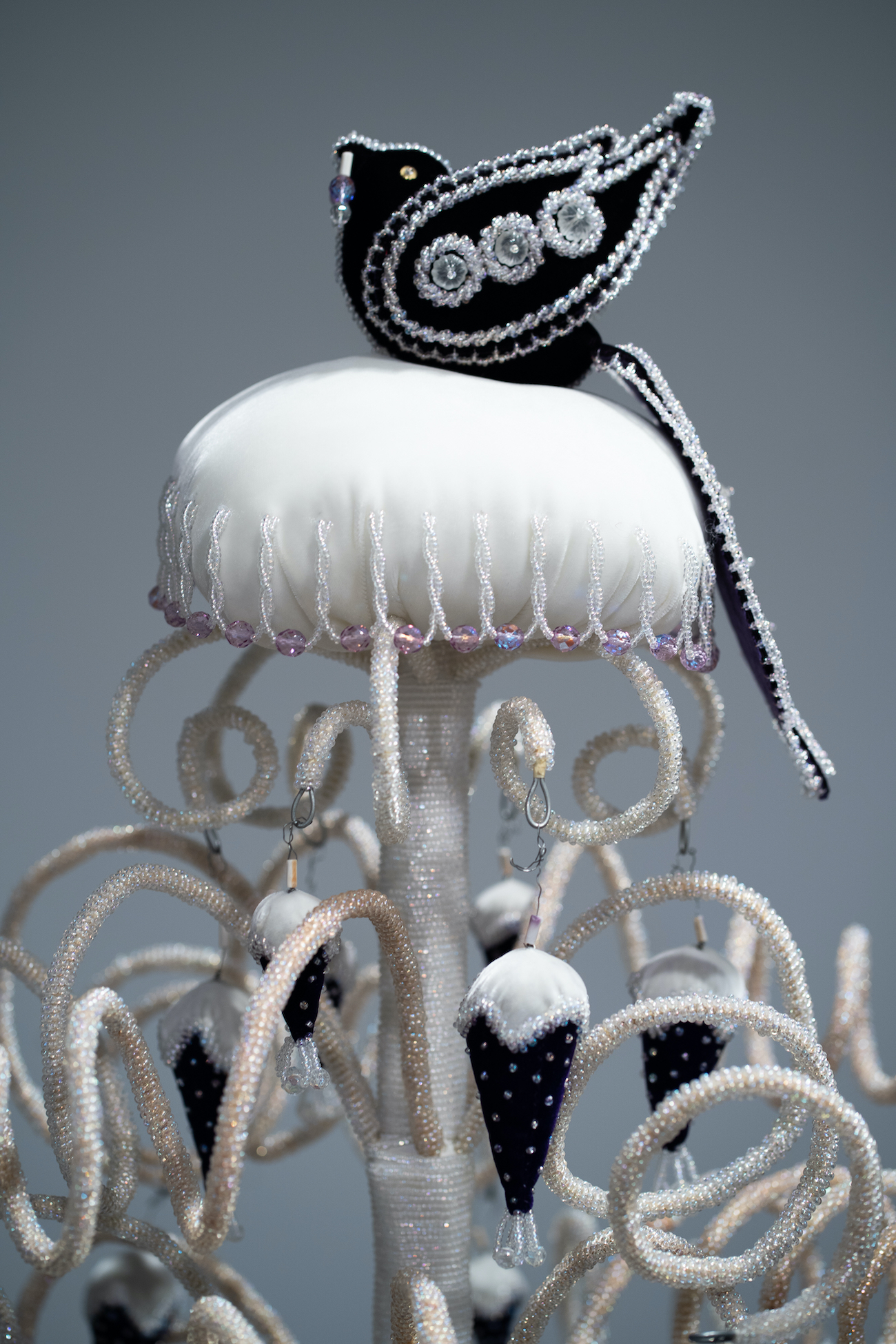 With a collection of over 2,000 pieces of Tuscarora beadwork, Jonathan compared his love for the art to an addiction.
Surya Vaidy | Staff Photographer

One attendee, Deborah O’Shea, said she was shocked to see Hill at the event. O’Shea recently acquired one of Hill’s beaded purses through an annual fundraising auction for the Matilda Joslyn Gage Museum, she said. She considers the beaded purse made by Hill a “treasure.”

For Jonathan, one of the most important parts of his work is the attribution of Tuscarora beadwork — he said he wants to make sure that its history is documented correctly.

“We know our history, our traditions, and they’ve been passed on from generation to generation. Non-Indigenous collectors and scholars have changed our stories and marginalized that history, and I’m here to correct it and set the record straight,” Jonathan said.

There have been multiple works written about the beadwork of other Iroquois nations, such as Seneca and Mohawk, Jonathan said. But none have been written on the Tuscarora raised beadwork, although he said this artwork is well-known outside of the Indigenous community. He is currently working on a picture book that will depict large color photos of the artwork, including some of his pieces.

Jonanthan said that, in the book, he will explain the history behind the pictures, which was told to him through oral traditions and histories from the Tuscarora community. He got the idea from social media followers who encouraged him to publish work about the art form.

“It’s been on my mind the last five years, because I share so much information on social media, and people have been asking, when are you going to write this book?” Jonathan said. “People love what I’m sharing and writing, but it’s time to compile it into one resource and to put out a book about Tuscarora artwork.”

Six players scored six or more goals in a balanced Syracuse offense. More on the statistics that summarized SU's 20… twitter.com/i/web/status/1…

On Tuesday, artist Grant Jonathan gave a history of Tuscaroran raised beadwork and the importance of its preservati… twitter.com/i/web/status/1…

Morgan State shot just 27% from the field in its first two games this season. More on the Bears, from @anthonyalandt bit.ly/3wREqD3

Opinion | Syracuse University should not include withdrawals on students’ transcripts since it is only reported for… twitter.com/i/web/status/1…

Blueprint 15 formed partially in response to concerns around displacement that could result from the impending Interstate-81 removal project. END_OF_DOCUMENT_TOKEN_TO_BE_REPLACED

The vigil started with a speech and introduction by Nia Williams and Jacob McGraw, peer educators of the STOP Bias and Hate Initiative. END_OF_DOCUMENT_TOKEN_TO_BE_REPLACED

Neal Powless spoke with The Daily Orange on what he has changed in the program since the 2019-2020 report. END_OF_DOCUMENT_TOKEN_TO_BE_REPLACED