Garrett Shrader grew out his beard in high school, and fans rallied around it at Mississippi State.

One Sunday afternoon in high school, Garrett Shrader went for an adventure. After finding a used pickup truck online that he liked, Shrader drove about 45 minutes to Marshville, North Carolina, to look at it. But on the way, Shrader’s car ran out of gas, and he didn’t bring his wallet, forcing his sister to drive down and fill his gas tank so he could make it back home to Charlotte.

Shrader’s high school coach Jason Estep said he remembered getting a call from Shrader’s mom, Christie Shrader, that day. “Well, you won’t believe what your quarterback did now,” she said to Estep.

“It wasn’t even like he processed the trip. It’s like ‘Oh I found a truck, let me hop in the truck,’” Estep said. “That’s kind of Garrett right there.”

Shrader has had his current truck — an aged, manual transmission, single cab Dodge Ram with an eight-foot bed —  for four years, Christie said. After transferring from Mississippi State to Syracuse, Shrader installed a custom-built camper shell on the back of the truck so snow couldn’t get in.

“He is very old school. He is just an old soul,” his father, Tracey Shrader said. “There’s no doubt about that.”

Shrader wants to keep the truck forever, Christie said. He got it while he was still playing for Estep at Charlotte Christian (North Carolina) High School, where he led the Knights to back-to-back state titles and received offers from over 20 Division I schools. But even after moving to Mississippi State and Syracuse, Shrader has stayed the same unique character that he is off the field while being able to flip the switch into “business mode” and lead teams as a quarterback, those closest to him said.

Off the field, Shrader hunts, flies planes, plays the guitar and listens to “twangy” music while avoiding social media, Christie said. On the field, he is a “bold” competitor who Syracuse has rallied around, said former Syracuse quarterback Dillon Markiewicz. Since taking over as SU’s starting quarterback in September, the Orange have become the top rushing team in the Atlantic Coast Conference, and they are just one win away from becoming bowl eligible for the first time in three years. And Shrader’s done it all while growing out a beard that head coach Dino Babers compared to that of mountain man Grizzly Adams.

“(He’s) just a good ol’ country boy,” Babers said. “That’s kind of his personality. He cares but he doesn’t. … He cares about winning, which is important, and I think he elevates other people’s play around him.”

At Mississippi State, Shrader was known for his fiery competitiveness and willingness to put himself on the line. In a game against Kansas State as a true freshman, Shrader scrambled to his right before leaping in the air, trying to reach a first down. He was popped, and spun in the air landing just short of the first down. “It was all or nothing,” Shrader said postgame.

At Syracuse, Shrader has done the same thing. Against Virginia Tech, Shrader stood strong in the pocket on a deep fourth-quarter throw to Damien Alford. While Shrader got smashed to the ground, Alford ran in for a game-winning touchdown to give SU its fourth win of the season. Babers compared Shrader to former SU quarterback Eric Dungey, saying while other players might be concerned about getting hurt, “all (Shrader) cares about is winning.”

Shrader’s roommate and center Airon Servais said the quarterback started winning the team over early in training camp by staying in the pocket and committing to throws even when pressure was right in his face — just like he did against the Hokies.

“This guy wants to play, he doesn’t care about getting smacked or whatever — he wants to win,” Servais said he thought to himself during training camp.

The “bold” personality Shrader brings to the field — hunting for contact instead of shying away from it, going airborne for touchdowns and diving for extra yardage — is the same thing he brings off of it, said Markiewicz, who recently entered the transfer portal.

Off the field, Shrader is outgoing and social with his teammates, Servais said, frequently singing and playing his guitar. He’s taken trips to Buffalo Wild Wings with teammates and Markiewicz invited him to go deer hunting during the bye week, though he couldn’t make it because his girlfriend from back home was visiting. 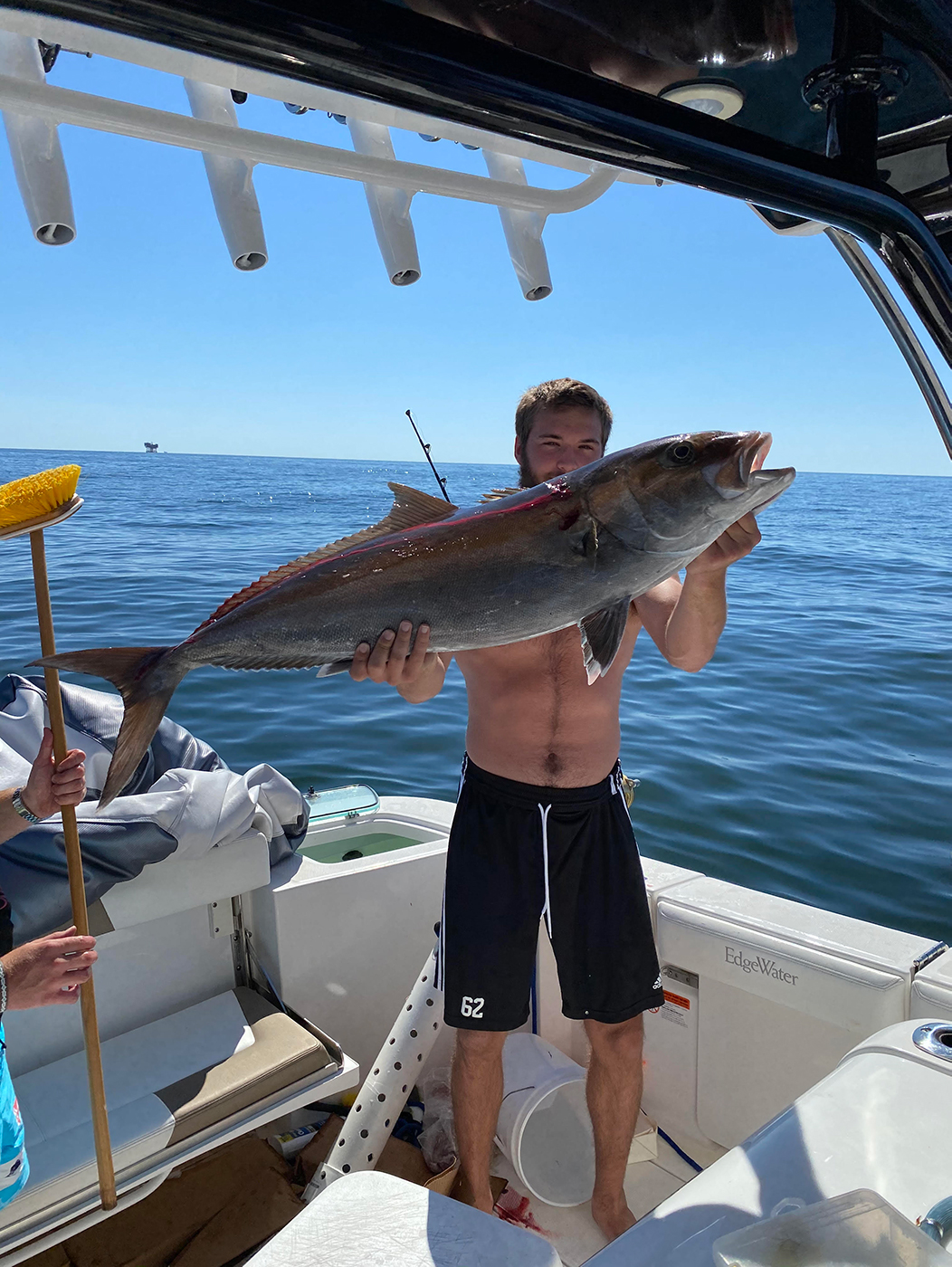 Garrett Shrader enjoys hunting and fishing when he’s not on the football field. Courtesy of Christie Shrader

Shrader hunts frequently at home, either by himself or with friends. In the woods behind his Charlotte home, he’s set up deer corn and trail cameras. Christie has helped him put up tree stands, where Shrader watches game film if he’s bored.

While hunting, Shrader usually finds success. He’s killed a buck that weighed over 200 pounds, along with coyotes, hawks and even a few pigs. Shrader taught himself how to use a bow and arrow so he can hunt when it’s not firearm season. For the introverted quarterback, hunting is about getting away from the field and into the woods by himself, Estep said.

“He doesn’t need a whole lot of stuff. He’s not a fluff guy,” Estep said. “He enjoys being by himself and kind of that solitude out there where he can just be at peace.”

Flying planes provided the same release for Shrader, Estep said. Shrader got his pilot’s license after entering the transfer portal last fall, carrying on a family tradition — one grandfather was a World War II pilot and another now lives in an airpark (a community designed around an airport) where Shrader first experienced flying. Now, flying is a hobby where Shrader does not have to think about football, allowing him to just “do what he wants to do,” Estep said.

Before he left for summer training camp at SU, Shrader flew to Charlotte Christian from eastern North Carolina for a workout. Estep was surprised that just hours after flying by himself, Shrader was throwing footballs on the practice field.

“It’s just kind of bizarre, really, but just what he wants to do,” Estep said. “So he’s going to do it.”

Before he learned how to fly, Shrader learned how to play the guitar. He wanted to take a guitar class in high school, but Christie made him enroll in an introduction to public speaking course instead. So, Shrader taught himself the guitar. He likes to play it to relax, Tracey said, and Servais said when he’s in the kitchen, he’ll sometimes hear Shrader playing guitar in his room.

Shrader likes to listen to Hank Williams and Charley Pride, his parents said. He’ll listen to a variety of genres, but likes country music — “the twangier the better,” Christie said. On family road trips, Christie would ask Shrader to put on something else after he played country and blues music for three hours straight. It’s music that most people wouldn’t be into, Estep said, adding to his uniqueness as a person. 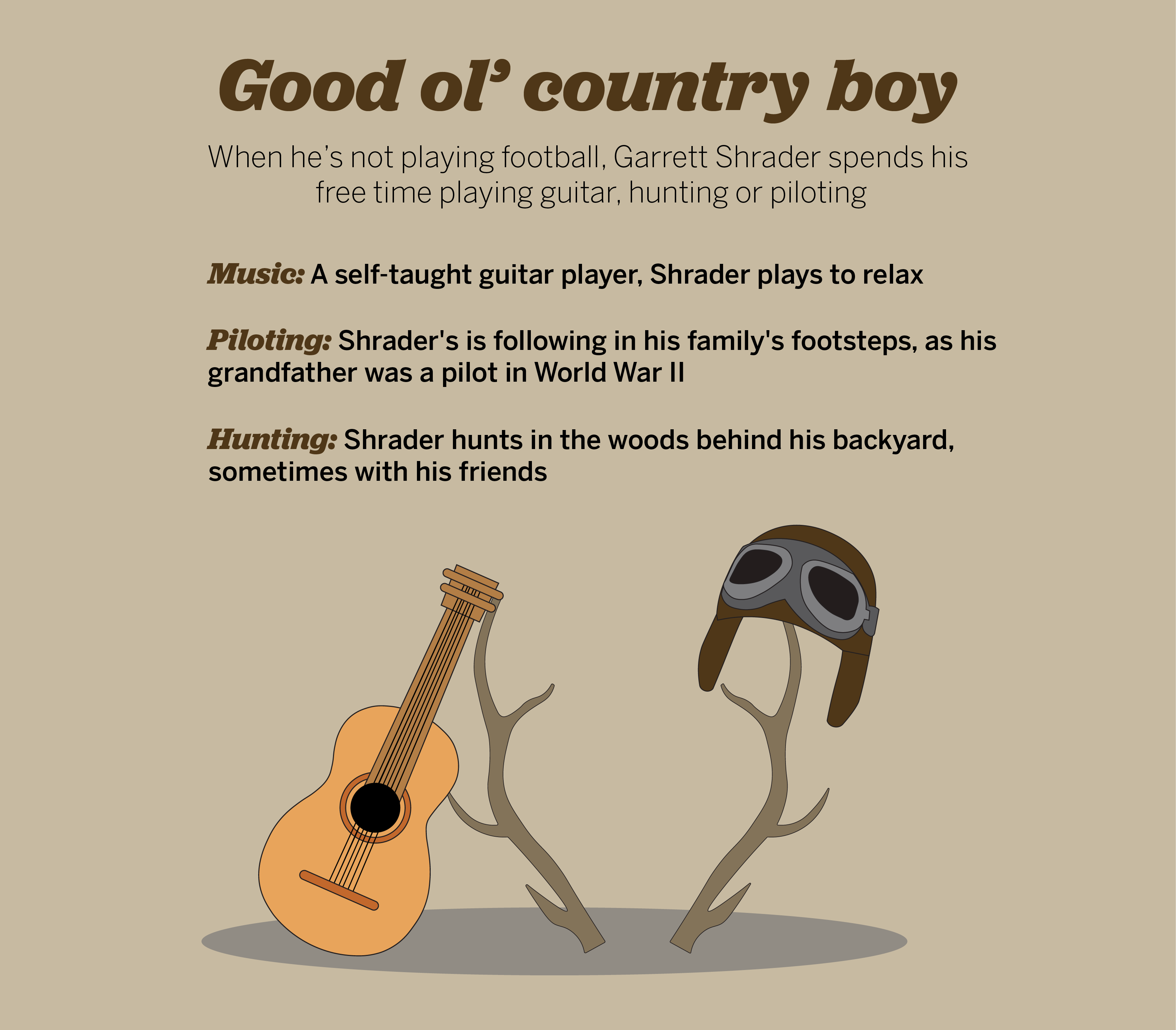 “His music choice really explains his lifestyle and who he is — super simple,” Estep said.

When it comes to social media, Shrader keeps it simple, too. Unlike most athletes, he doesn’t have an Instagram account and rarely posts on his Twitter. Estep said that Shrader isn’t “an affirmation guy” and doesn’t seek praise.

The more active Twitter account is a parody one featuring, but not run by, Shrader with the handle @CaptainSchrader, which shows the quarterback as a Civil War soldier and chronicles “the battles and journeys of a bearded legend in the making.” His beard, which the account references, is one that has also been compared to that of Grizzly Adams as well as Tom Hanks in “Cast Away” and in “Forrest Gump” while he’s running.

Shrader started growing his beard as part of a “No Shave November” campaign during his junior year at Charlotte Christian, his parents said. He cut it in December, once the season was over, but liked the look. Christie said Shrader has a “baby face” but looks more intimidating with the beard, helping him earn respect. He said it’s “low maintenance” and easy to take care of.

“For some reason, he just likes that crazy look,” Christie said.

Dear Mother,
I writest to you here in the wee hours of morn. Battle awaits us, as Carolina men-those known as the Deacons of Demons approacheth. Pray my sidearm true, my feet as that of a gazelle’s on the Afrikan savanna. The men found your devil’d eggs a nice touch in camp.
-GS

At Mississippi State, Shrader’s beard had a coffee named after it and fans rallied around the motto “fear the beard.” But the quarterback had problems keeping his helmet on, and quarterbacks coach Andrew Breiner joked Shrader had to either talk to NFL quarterback Ryan Fitzpatrick about beard maintenance or get rid of it altogether. When Shrader came to Syracuse, equipment manager Jim Schlensker had to loosen the quarterback’s chinstrap so the beard didn’t sit too high, Shrader said.

Shrader said he hasn’t set a time for when he’ll shave the beard. But Tracey said Shrader usually trims it “real low” after the season ends, and he has a specific barber he likes to go to back home.

But for now, Shrader will let it grow. Like the woods and the planes back home, it can wait. Shrader’s focused on picking up that one win Syracuse needs to be bowl eligible for the first time in three years. He hasn’t even been with the Orange for a full season yet, but he’s already won over the locker room with his unique personality.

“It’s a great trade for him to be able to pull that off,” Estep said. “The great ones are able to do that.”

RT @anthonyalandt: Here at the Dome with @anish_vasu for Syracuse’s game against Morgan State. The Orange are looking to rebound after a bi… After showing flashes of potential last season, Jesse Edwards has stepped up as the starting center for Syracuse END_OF_DOCUMENT_TOKEN_TO_BE_REPLACED

Blueprint 15 formed partially in response to concerns around displacement that could result from the impending Interstate-81 removal project. END_OF_DOCUMENT_TOKEN_TO_BE_REPLACED

Neal Powless spoke with The Daily Orange on what he has changed in the program since the 2019-2020 report. END_OF_DOCUMENT_TOKEN_TO_BE_REPLACED