Alumni, employees look back on 50 years of People’s Place

Since its founding in 1971, the cafe has only changed in expanding its coffee brewing capabilities, maintaining its humble location and management.

It was the fall of 1971, and Ted Finlayson-Schueler needed to find two people to staff the Saturday night shift at Hendricks Chapel’s newest addition: People’s Place.

Lisa Allison, then Lisa Meybert, had just broken up with her boyfriend, so she volunteered to take Saturday nights to keep her busy. She knew Finlayson-Schueler through the hours she would spend playing bridge in the Noble Room — the room next to what would become People’s Place in 1971.

Nate Allison, a friend of Finlayson-Schueler’s from the Hendricks Chapel choir, offered to work the Saturday shift as well.

“I remember looking when he posted the roster and seeing that I was working with Nathan Allison. I said, ‘Who’s Nathan Allison?’ Our paths had not crossed because I was a bridge player and a Noble Room freak and Nate was not at that point,” Lisa said.

The two worked side-by-side in the coffee shop, and soon enough Nate was learning to play bridge in the Noble Room to spend more time with Lisa in order to “make (himself) more attractive to her,” he said.

“In addition to it being People’s Place’s 50th Anniversary, it’s ours,” Lisa said.

Since its founding in 1971, People’s Place has remained a focal point on Syracuse University’s campus. Though the non-profit cafe may be turning 50 years old this year, Finlayson-Schueler said people’s love for it has remained unchanged.

Before People’s Place became a full mainstay coffee shop, it was an honor-system stop for students in search of a coffee or donut as a way to emphasize the welcoming nature of the Noble Room. After he saw that people would not always leave money for their food and drinks, Finlayson-Schueler, the co-chair of the university religious council at that time, decided to take the summer to transition it into a full business. 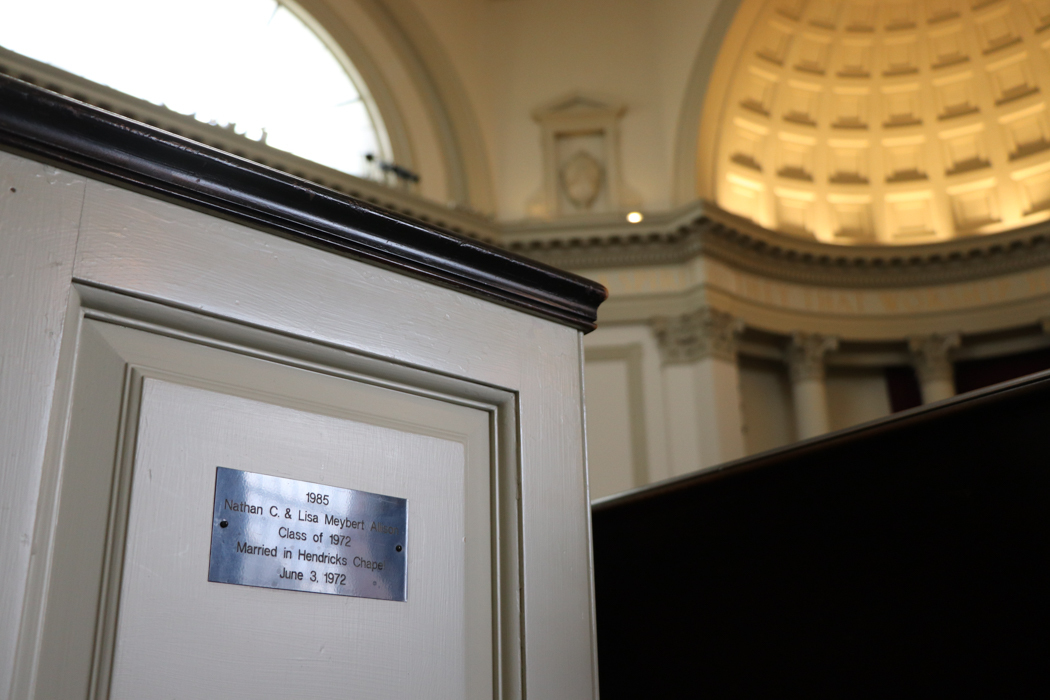 Lisa Allison met her husband in 1971 at People’s Place, and they got married the next year next door to the cafe, in Hendricks Chapel.
Lucy Messineo-Witt | Photo Editor

His mother began to make cookies for People’s Place with his brother, who would drive home every other weekend from Cornell University. One weekend they made around 5,300 cookies, Finlayson-Schueler said.

Slowly, the shop became more sophisticated, switching from brewing coffee in a 100-cup urn to working with Paul deLima Coffee and using machines that brewed three pots of coffee. At that time, a pound of coffee was only $1 and Lisa Allison remembers the coffee selling for 10 cents a cup.

People’s Place has maintained its low prices, with a small coffee only costing $1. For current SU freshman David Gabbay, these prices are what brought him back to the Noble Room a second time.

Gabbay, along with SU junior Olivia Thompson, are both fans of the signature Austin Powers — a drink that consists of 1/3 coffee, 1/3 hot chocolate and 1/3 chocolate milk. Thompson’s mom went to SU in the early ‘90s and would always talk about the Austin Powers. So when Thompson toured the campus in 2017, People’s Place was the first place they went.

“I think it’s been so successful because it’s not a hidden aspect of the campus, but it definitely is a gem of the campus that not many people know about,” Thompson said. “But once people do know about it, they love it so much.”

Though People’s Place is not a religious organization, many religious groups use it as a meeting place due to its location in Hendricks. Ian Solow-Niederman, the assistant director at Hillel, said Hillel has a weekly tab at People’s Place. Amir Durić, the Muslim Chaplin, opens a tab on Friday afternoons at the cafe as well.

“It will be a sign and expression of our hospitality because our faith invites us to be hospitable, to break bread with people, to share things with them, and we thought this is one excellent way to do that,” Durić said.

At a time when Schine Student Center and Bird Library weren’t even blueprints yet, People’s Place was a hub for students to gather in between classes, especially for Clelia “Cookie” Ilacqua, who graduated from SU in 1974 as a commuter student.

“It was some place to land,” Ilacqua said. “If you were running between classes and you had an hour between chemistry and calculus what do you do? Just stand around? There was no place to go. It was a really different campus in 1970. It was much smaller.”

SU senior and People’s Place manager Willow Keith has seen more customers this year than ever. She said that there are long lines all day, and they’re working on adjusting to the higher volume of customers. She said she thinks it’s due to everyone being back on campus after COVID-19 forced many people to be remote last year.

And in our 50th year, WE ARE NOW ACCEPTING CREDIT AND DEBIT CARDS.

A photo posted by peoplesplacesu

“My hope is that the space can maintain the integrity of what it is, and our ethos as a student-run sort of (cafe). ‘Caffeine for the common good’ is the slogan they came up with in the ‘90s,” Keith said.

People’s Place now serves vegan baked goods, which Thompson said shows that the coffee shop knows who their audience is. The baked goods are supplied by Fatcat Baking, a local bakery run out of Megan Mills’ home.

It’s been about one year since Mills started supplying for People’s Place, and she said she appreciates how the nonprofit picks a wide variety of goods as it allows her to be more creative with what she’s baking. She bought a five-pound bag of vegan sprinkles in Syracuse colors reserved for her SU orders. Mills has made whoopie pies, donuts, cupcakes and more for People’s Place.

“They’re always so nice and cheery in the morning and I’m like ‘Oh God, to be young again,’” Mills said.

Although Finlayson-Schueler is the original founder of People’s Place, he said he was there for just two years as a manager, like everyone else. This ensures that no one individual has a claim over the cafe.

Fifty years later, Finlayson-Schueler said People’s Place has stuck to its original goal — to fill a need for students and provide a caring and supportive environment within Hendricks Chapel.

“It’s never been an effort to be pretentious in any way,” he said. “It’s just been a very caring, supportive environment where people work and serve other people and people come to get a coffee and a smile from the person who’s serving them.”

When Nate and Lisa Allison visited People’s Place in the summer of 2019 with Finlayson-Sheuler, it looked the same as the place that they all met besides the fact that now it had more pastries and a chalkboard.

“We showed up to our shift, and as you can imagine Saturday night was pretty dead. I think perhaps he only put the shift on because I requested it and then he had to find someone else to fill the spot,” Lisa said. “But he denies setting us up as a couple — I think it was just pure accident.”

Solow-Niederman said that the coffee shop is a very powerful community builder and offers a great place for students to gather.

“It’s just a place to take a pause out of your day and out of your week to grab some coffee and connect and see people and just a reminder to slow down and be part of a community,” Solow-Niederman said. Teisha Hyman went into the locker room at halftime with half of Syracuse’s points. She added six more points in the second half. END_OF_DOCUMENT_TOKEN_TO_BE_REPLACED

Blueprint 15 formed partially in response to concerns around displacement that could result from the impending Interstate-81 removal project. END_OF_DOCUMENT_TOKEN_TO_BE_REPLACED

Neal Powless spoke with The Daily Orange on what he has changed in the program since the 2019-2020 report. END_OF_DOCUMENT_TOKEN_TO_BE_REPLACED

Video: The legacy of the Divine Nine