The vintage store opened in February after Michael John Heagerty, McCarthy Mercantile’s founder, put SU sophomore Minicozzi and Syracuse local Pfaff in contact. Heagerty connected them because he realized they were curating the same kind of fashion, he said.

“Michelle’s really good at marketing. Abigail’s very good at merchandising,” Heagerty said. “They help each other out in taking on the different roles that are needed to make a successful shop happen.”

Hagerty isn’t the only one who agrees that the two fashion retailers have gotten along well.

Though Minicozzi thought that their differing backgrounds would make working together strange, the two hit it off right away. Minicozzi said she’s thankful Heagerty realized that Minicozzi and Pfaff would make great partners in the world of vintage indie shopping.

“I feel like we instantly clicked, and all of our ideas went together really well,” Minicozzi said. “We’re definitely very grateful for him because we can go to him for a lot of things. He knew we had the same goal to further our businesses.”

Bringing Minicozzi and Pfaff together wasn’t Heagerty’s first time trying to bring smaller artists into the spotlight. He has run other events such as Sidewalk Sessions, where vendors and musicians are able to display their art outside the mercantile. Heagerty always ensures that he’s giving new artists a chance to show their work during events like those held by Salt City Market.

“We’re just trying to create a more inclusive way to buy clothes, Abby Minicozzi,” one of the founder of The Cherry Pit

A photo posted by _thecherrypit

“I’m now a professional risk taker,” Heagerty said. “It’s what I do, but it’s been great because it gives opportunities for people to come up with their brand and create pop-up opportunities.”

Pfaff came up with the idea for the store when she wanted to think of ways to thoughtfully get rid of clothes she often impulse-buys at thrift stores. Customers can stay up-to-date on outfits available for sale by following the store’s Instagram, and they can sign up for clothing swaps through the link in the store’s bio.

The Cherry Pit occasionally hosts free clothing swaps, which the founders said they support because of the events’ positive environmental and financial impact.

“It’s a good way for people to swap cheaply made clothes to prevent them from going to the landfill,” Pfaff said. “It’s preventing these fast-fashion clothes from ending up in the trash and giving them one more life.” 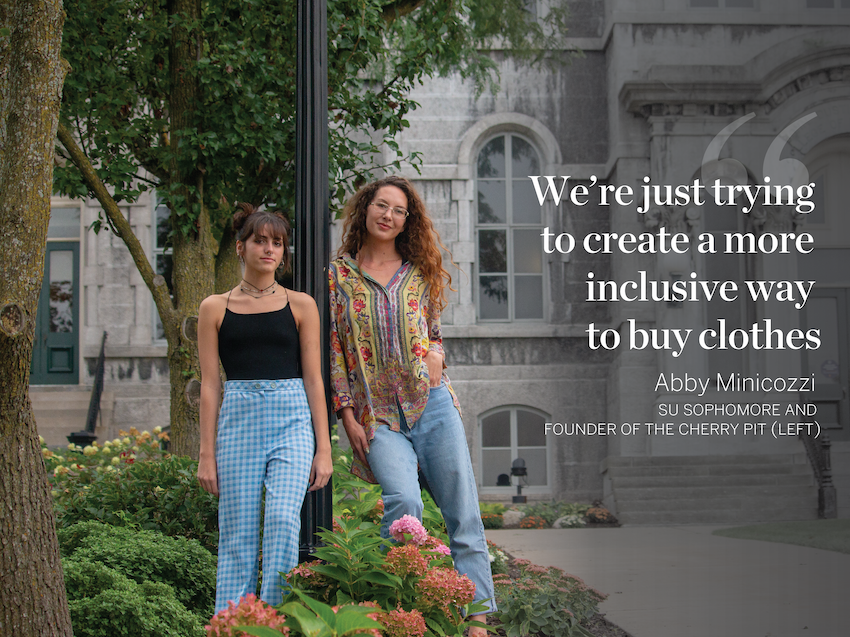 And while the clothing swap is free of charge — participants bring clothes and may choose as many as they brought — the event gives people a chance to stop by and potentially find items they’d like to buy.

Aside from its financial inclusivity, Minicozzi said The Cherry Pit is just as inclusive when it comes to size and gender. They want all of their clothing to be treated as unisex, and Minicozzi said that it makes her happy to see men walk into the store and buy blouses, skirts and dresses.

Minicozzi described the Mercantile as a “hidden gem” because of its downstairs location at 217 S. Salina St. In the building’s lower level, there’s a wider selection of indie shops.

The Cherry Pit is just one of the many stores managed by lesser-known artists in The McCarthy Mercantile that help provide a creative space within the community, Heagerty said.

Despite the store only being a few months old, Heagerty has noticed the business picking up popularity and looks forward to seeing what Minicozzi and Pfaff do in the future.

“The Pit is an infant. It’s only a few months old,” Heagerty said. “So to say that … they’ve grown and learned and adapted into this recognizable brand is impressive.”

Center Jesse Edwards is proving he is ready this season to step up to the big-man role for Syracuse, from… twitter.com/i/web/status/1…

After showing flashes of potential last season, Jesse Edwards has stepped up as the starting center for Syracuse, f… twitter.com/i/web/status/1…

Blueprint 15 formed partially in response to concerns around displacement that could result from the impending Interstate-81 removal project. END_OF_DOCUMENT_TOKEN_TO_BE_REPLACED

The vigil started with a speech and introduction by Nia Williams and Jacob McGraw, peer educators of the STOP Bias and Hate Initiative. END_OF_DOCUMENT_TOKEN_TO_BE_REPLACED

Neal Powless spoke with The Daily Orange on what he has changed in the program since the 2019-2020 report. END_OF_DOCUMENT_TOKEN_TO_BE_REPLACED