The history behind the names of SU dorm buildings

The stories of the people behind the names of SU’s dormitories are found in Bird Library’s archives.

Syracuse University’s history is rich and storied, and there’s much to learn about the present by looking to the past. Understandably, SU students grow accustomed to calling buildings by their shorthand, from abbreviating BBB to lumping Day and Flint Halls under the umbrella of The Mount. But remembering the figures who shared their names with campus enables students in the present day to cultivate a knowledge for the past.

Located on the sixth floor of Bird Library, the Special Collections Research Center feels like a well-kept secret. Only scarcely populated by students, it boasts an impressive number of artifacts, such as historic images of SU’s campus. It’s here that the SU Buildings and Grounds Collection is stored.

On Main Campus, 16 of the 18 dorm buildings — all except Washington Arms and Walnut Hall — are named after prestigious SU alumni or important members of the SU community, and details from Bird’s archives tell their stories.

Inhabited in 1952, the building was originally designated as a women’s dormitory and later a Living Learning Community in 1975. Since the late 1980s, Shaw has undergone multiple renovations to add more wings as well as the dining center.

This dorm’s namesake is Robert Shaw, His wife, May M. Shaw, donated $1.5 million during the construction of the building.

This hall was built in 1954 and housed only female students until 1996.

Movie producer and 1890 graduate Frank J. Marion gave his name to this hall. Marion, who was involved in student journalism on campus and the fraternity Delta Kappa Epsilon, served as a trustee of the university for over 50 years.

Marion formed his own film studio, Kalem Company, where he pioneered sending film crews outside the United States to gather footage on location. “From the Manger to the Cross,” which was filmed on location in Egypt and Palestine, is arguably Marion’s most influential movie he produced. 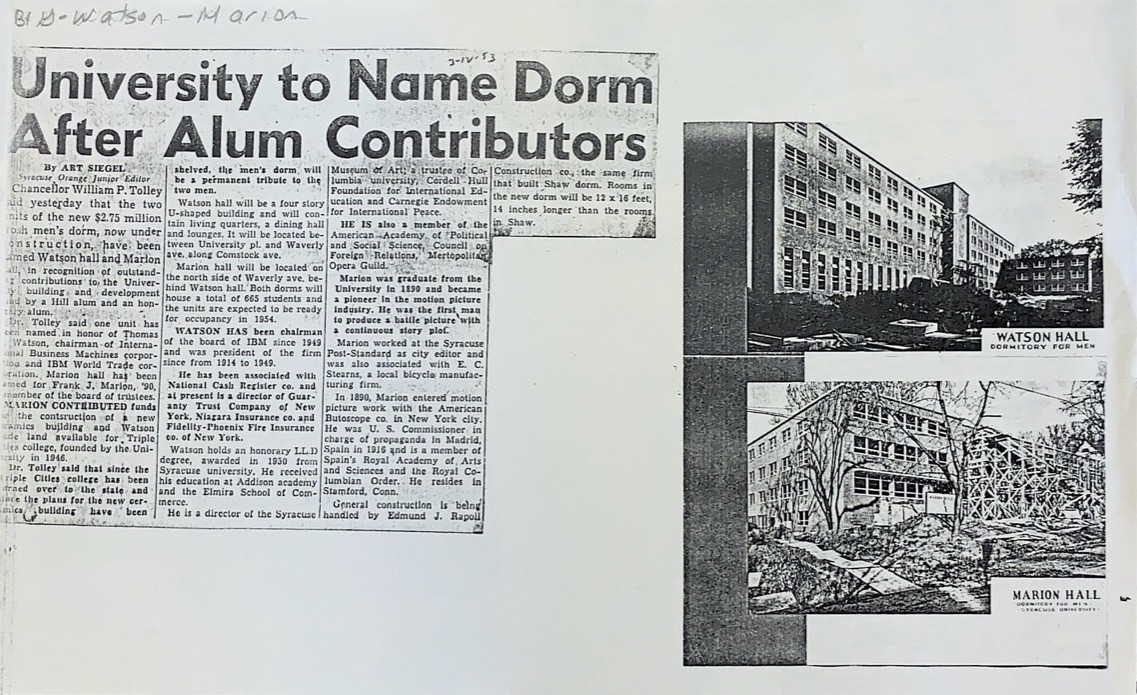 Watson Hall was built at the same time as Marion to be a companion dorm for male students.

This dorm was named after Thomas J. Watson, who received an honorary doctorate degree in law from SU in 1950. He also served as the director of the Syracuse Museum of Art and was designated an SU trustee.

Watson, an American industrialist, was the founder of IBM and CEO of the tech company from 1914 to 1956. He has been called the “world’s greatest salesman,” and upon his death in 1956, he had accumulated significant wealth and success in his lifetime, though some of that wealth was notably accumulated when IBM worked with Nazi Germany.

One of two buildings located on Mount Olympus, Day Hall was first inhabited in 1958.

James Roscoe Day, the fourth chancellor of Syracuse, provided his namesake to Day Hall. He is remembered for his expansion of SU’s campus by 22 buildings, including Carnegie Library — thanks in part to Andrew Carnegie’s donations to SU — and the Colleges of Medicine and School of Home Economics. He increased both enrollment rates and income for the university while serving as chancellor from 1894-1922.

The other dorm located on The Mount, Flint Hall, was finished two years before Day Hall in 1956, and it was originally called Mt. Olympus Hall.

Today, the building is named after Dr. Charles Wesley Flint, SU’s fifth chancellor. Chancellor Flint continued the expansion efforts started by his predecessor, Chancellor Day, and was responsible for significantly raising the endowment for the university as a whole.

Flint brought SU out of a deep financial hole as chancellor from 1922-1936. He is credited for his success with raising funds, as well as the expansion of the School of Education. Chancellor Flint is also responsible for establishing early iterations of the Maxwell School of Citizenship and Public Affairs and the School of Journalism at SU.

Initially a conference hall in the summer of 1960, Sadler Hall started housing students that fall. 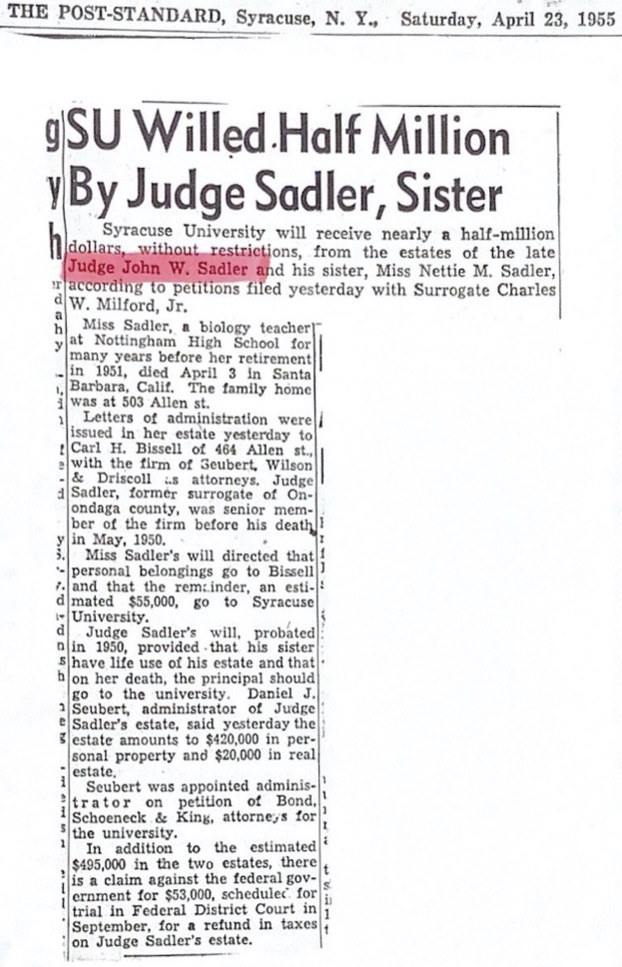 Kimmel Hall
Completed in 1962, Kimmel Hall was the first dorm on campus to house freshmen and upperclassmen on the same floor.

Kimmel is named after Claude L. Kimmel, who graduated from the university in 1905. Kimmel was active in clubs on campus, including rowing, crew and yearbook. Additionally, he served as a trustee of the university after graduation.

The construction of DellPlain Hall finished in 1959, but students — initially just men — started living there in 1961.

This dorm gets its name from SU graduate Dr. Morse O. DellPlain, who earned an electrical engineering degree from the university in 1903. SU gave DellPlain an honorary doctorate in engineering in 1951. He was actively involved in the alumni fund and served as an SU trustee from 1956-1962.

The dorm is named for Willis H. Booth, who earned an honorary doctorate in law in 1955 and was elected an honorary trustee of the university in 1956. 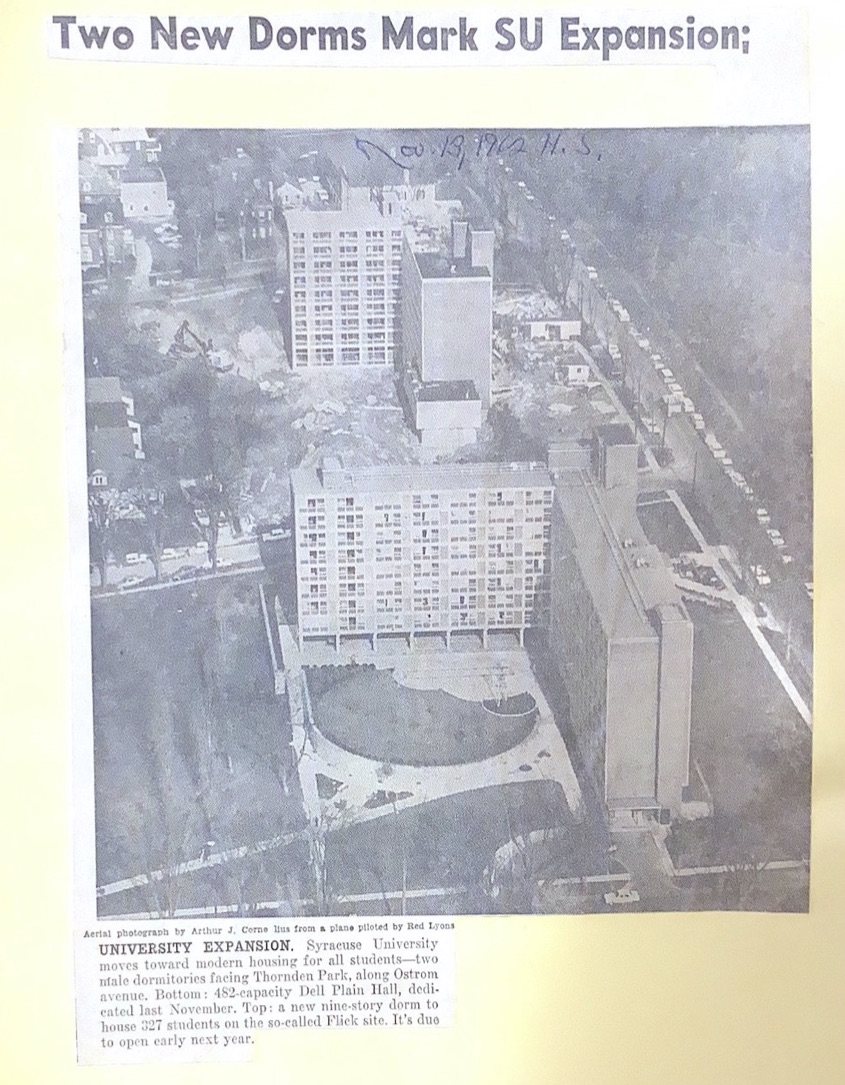 In 1964, SU built Haven Hall for female students. Haven has existed in two different locations, with the original dormitory standing where the Newhouse School of Public Communications sits today.

The university named the hall after Erastus O. Haven, SU’s second chancellor. Chancellor Haven previously served as president of the University of Michigan and Northwestern University before becoming Syracuse’s chancellor in 1874.

At 21 stories, Lawrinson Hall was the second-tallest building in Syracuse when it was built in 1965, behind only the State Tower Building. Originally, the hall was designated for male students.

The building is named after William Henry Lawrinson and Elizabeth M. Lawrinson, the parents of Ronald K. Lawrinson, who donated in their honor. None of the Lawrinsons attended Syracuse, but Ronald Lawrinson became a generous benefactor after he became close friends with Lawrence S. Warren, a graduate of the SU Class of 1925. Lawrinson’s interest in higher education led him to make significant donations to SU, eventually dedicating the hall to his parents. 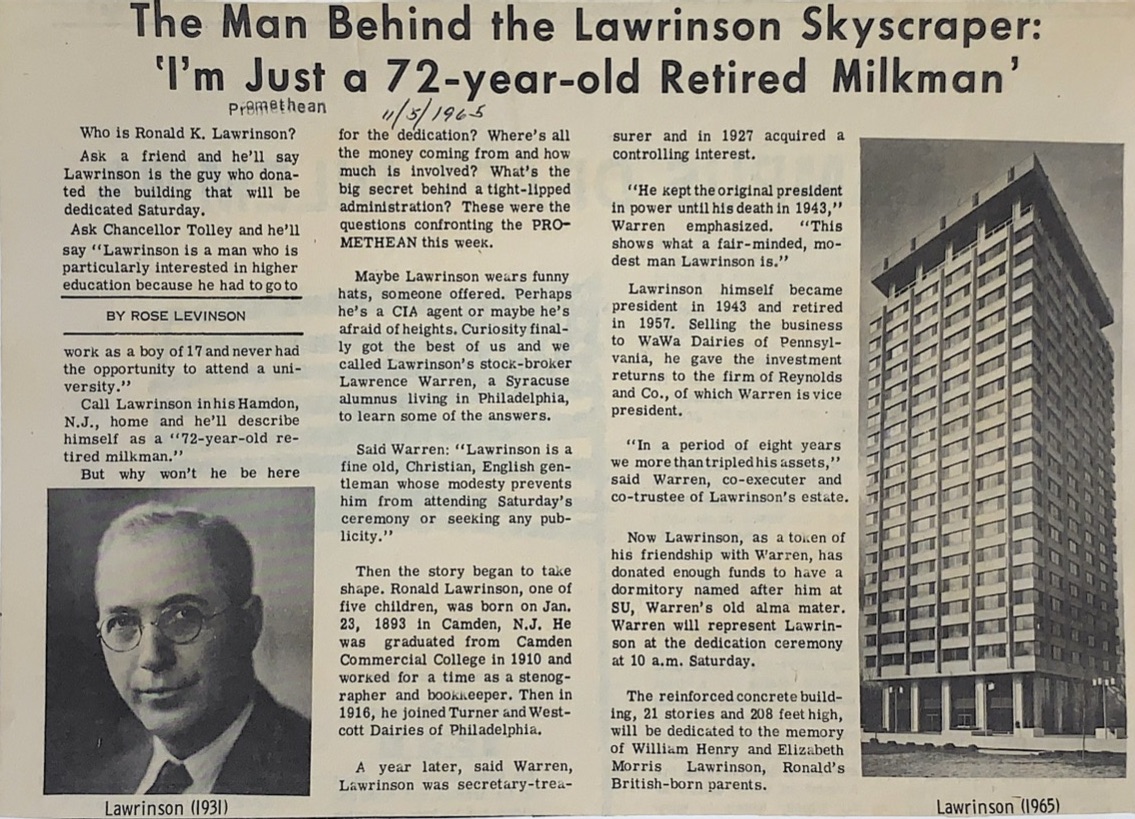 Boland Hall was originally built as a dorm along with Brewster Hall in 1968.

The counterpart to Boland Hall was named after Neal Brewster and his wife, Mabel Brewster Pierce. Neal Brewster graduated from SU’s College of Law in 1902 and served as a trustee of SU beginning in 1921. In his will he designated $1 million in scholarships for law students.

In 2005, Brockway Hall was added to the Brewster-Boland complex as an additional living space and dining center.

Brockway is named after Perle Brown Brockway, a graduate of SU’s College of Medicine in 1908.

In 1971, Oren Lyons Hall was home to the Phi Sigma Sigma sorority until the organization sold the building to the university in 1974. After the purchase, the building was known as the International Living Center and housed 38 residents in an intercultural community. It wasn’t until 2007 that the dorm was renamed after Oren Lyons.

Oren Lyons, an Onondaga Nation faithkeeper and All-American lacrosse goalie for SU — graduated from Syracuse with a fine arts degree in 1958. After graduation, Lyons became an advocate for Indigenous peoples’ rights. His work as an activist has led him to be a member of the Indigenous Peoples of the Human Rights Commission of the United Nations.

Ernie Davis Hall received much attention upon its construction. As SU’s first dorm building that meets the Leadership in Energy and Environmental Design rating system, Ernie Davis was considered a high-tech dorm building when first occupied in 2009.

The dorm is named after Ernie Davis, who graduated from SU in 1962. Davis is known for his achievements as a football player, specifically for becoming the first Black athlete to receive the Heisman Trophy.

Ernie Davis was a two-time All-American college football selection and wearer of the famed No. 44. As a football player, Davis led SU’s team to a national championship in 1959. After graduating in 1962, Davis was picked first in the NFL draft, and he was traded to play for the Cleveland Browns. The running back never got to play an NFL game, however, due to his diagnosis of leukemia in 1962. He died the following year. Davis’ legacy, however, lives on at SU through the various plaques and statues honoring him around campus.

Head coach Dino Babers said Sean Tucker asked to stay in during the Orange’s loss to Louisville, from @csmith17_. dailyorange.com/2021/11/syracu…

From pescatarians to vegans, everyone can make these recipes to create effective meal plans. dailyorange.com/2021/11/meal-p…

Garrett Shrader passed for just 46 yards in Syracuse's blowout loss. @anish_vasu reviews what went wrong for the of… twitter.com/i/web/status/1…

Garrett Shrader passed for just 46 yards in Syracuse's blowout loss. @anish_vasu reviews what went wrong for the of… twitter.com/i/web/status/1… Syracuse University released its Diversity, Equity, Inclusion and Accessibility draft plan in October, and its review and feedback process was extended to Dec. 3. END_OF_DOCUMENT_TOKEN_TO_BE_REPLACED

Though cooking in college can be challenging, meal prepping with the “rule of threes” can simplify healthy eating. END_OF_DOCUMENT_TOKEN_TO_BE_REPLACED

3 Syracuse organizations that are fostering safe spaces for LGBTQ community