Emily Engstler worked out daily for four months during the offseason to refine her game for the upcoming season.

Danielle Engstler didn’t expect her sister to continue her rigorous dieting and summer workout routine when the Syracuse guard returned to central New York. Emily Engstler’s work in the 2020 offseason was already a drastic improvement from that of past offseasons — she previously “took a break from routine” when she returned to her family’s apartment on Roosevelt Island, in New York City, her sister said.

“‘I’m home now, I can chill, I can do whatever I want,’ and that’s what she did,” Danielle said of Engstler’s attitude during previous offseasons.

Engstler had a new mindset last offseason, though. When she got home in March due to the pandemic, she started a routine with her sister’s guidance. It began with bodyweight exercises and cardio but expanded to weight lifting when Danielle purchased dumbbells and kettlebells. Engstler had a strict diet that cut out junk food.

What originally stemmed from “boredom” during quarantine developed into a routine that Engstler followed closely for four months while at home. The junior guard lost nearly 40 pounds between returning home last March and coming back to campus in July.

Before last March, Engstler didn’t take her health and fitness as seriously as a Division-I player should, Danielle said. Engstler’s sister pushed her at home but was unsure whether four months of progress would be undone if Engstler let up after returning to SU.

But it was the tangible results that kept her on track — seeing the before and after photos, the improvements in her game, the praise she got from teammates and coaches.

“It became a mentality because we did it everyday. She really got into the habit of it,” Danielle said. “When she got to Syracuse, she kept it up, and she continued to lose even more weight, which I was not expecting … It’s really a daily thing for her now.”

Now, heading into the NCAA Tournament with No. 8 seed Syracuse (14-8, 9-7 Atlantic Coast), Engstler’s big year was made possible by her offseason work. The ACC Co-Sixth Player of the Year is coming off a season-high 21-point performance against Louisville in the conference tournament semifinals and an All-ACC Tournament Second Team selection. She leads the team in rebounds per game (9.1) and total steals (31) and averages the third-most minutes on the team despite notching just three starts.

Jess Villaplana, Engstler’s mentor and AAU coach, said that WNBA coaches and scouts were in North Carolina’s Greensboro Coliseum watching Engstler’s ACC Tournament performance. ESPN reporter Holly Rowe posted on her Instagram story after the tournament saying she was “obsessed” with the junior guard, Villaplana said. Her new physique, combined with her natural athletic abilities and the maturity she’s developed with age, has reshaped Engstler into the player she’s becoming for SU.

“If COVID didn’t happen, she never would’ve had that time to learn and do what she did,” Danielle said. “If it didn’t happen, I don’t even know if she would be the way she is now.”

New York City was on full lockdown when Engstler returned home, and the city took down rims on basketball courts. With limited opportunities to play basketball and nothing open, Engstler couldn’t hang out with friends in the neighborhood — her mom definitely wasn’t allowing that, either, Villaplana said.

Danielle, who’s five-and-a-half years older than Engstler, developed an interest in fitness training when she was in college and has continued doing plyometrics since. She had just adapted her workouts for the cold weather when Engstler told her sister she really wanted to work out with her and build muscle. But before that was possible, Danielle told her she needed to lose weight first.

It showed in her game. She didn’t get down to the other end quick enough, and at times her play was a little “lethargic,” Danielle said. Before Syracuse had Kamilla Cardoso, it relied on Engstler to be under the basket to rebound.

“It’s more important that she has endurance and energy rather than muscle mass itself,” Danielle said of the two’s initial goals. “To get her season-ready, we had to focus more on cardio and losing the weight.”

Engstler’s sister pushed alternatives. Yogurt with berries replaced ice cream because of the natural sugars in fruit, seltzers and water replaced soda, and though Engstler was always a salad eater, she got into them even more.

“I sacrificed a lot,” Engstler said after tying her then-season-high 18 points in SU’s Feb. 25 win over Boston College.

Engstler ate full meals so she didn’t crave snacks, and after two weeks, she got past the “withdrawal” phase, her sister said. During those initial steps, they did a lot of circuits with bodyweight exercises, such as jumping jacks, pushups, bicep dips and ab exercises. Danielle did them, too — five or six exercises, 30 seconds each, for four rounds.

Once Engstler started losing weight, they began lifting. Mondays were back and biceps, Tuesdays were legs, Wednesdays were chest and triceps, and so on. The two had different goals, though, so the older sister would list out the workout on a piece of paper for the younger. Engstler also went on daily runs, something she previously hated. Danielle said Engstler’s previous mindset regarding running was “If she didn’t have to do it, she wouldn’t.”

This summer, Engstler sat down alongside her family members and ate her mom’s cooking for dinner everyday — which also made it easier to eat healthy because her mom cooked to fit her diet. She developed a routine where she doesn’t eat dinner past a certain hour, Villaplana said, one that she’s stuck with in Syracuse.

Engstler had to learn how to make those healthy meals herself when she came to campus. Her mom sent grocery lists to help guide what to buy, along with recipes. Once she settled into the routine, things were easier. She lifted at SU’s weight room with her “workout sis” Digna Strautmane, Villaplana said, which helped Engstler stay on track.

Engstler’s new physique allows her to get up and down the floor quicker than before. Her increased fitness paid dividends for her defensively, said head coach Quentin Hillsman, who called her a “quick-twitch athlete” who can break on the ball and make up ground.

“She’s saved us a lot of possessions with her steals and her blocked shots and her rebounds, so it’s been invaluable for us,” Hillsman said. 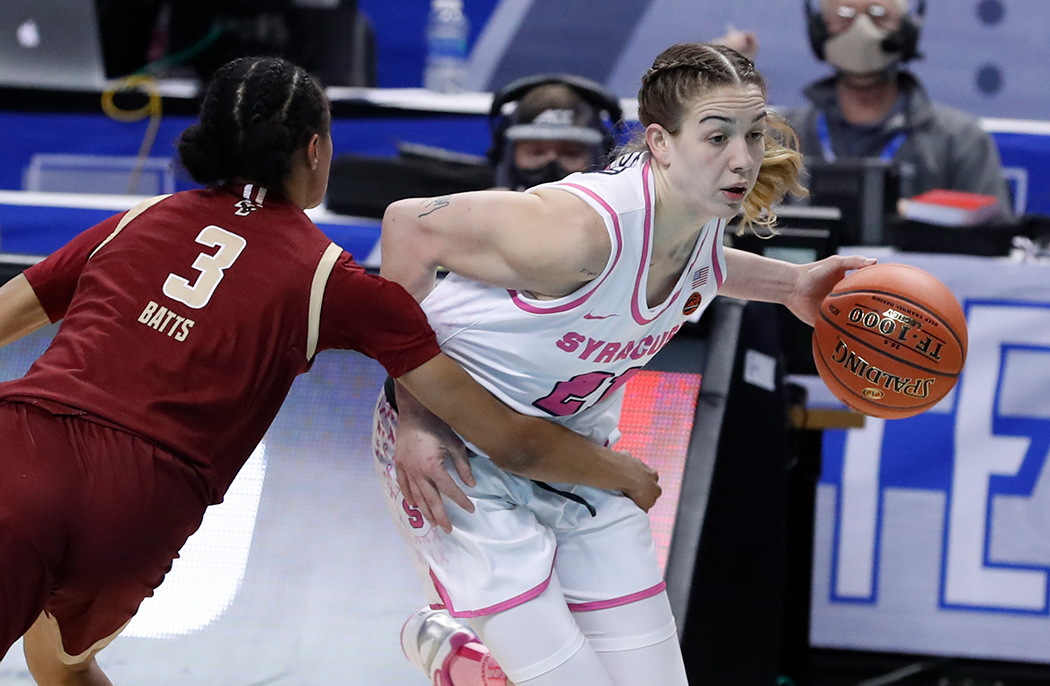 Engstler was always versatile, but Villaplana said Engstler could play the one through the five, pointing to a handful of possessions where she played point guard against Louisville in the semifinals.

Engstler’s limited starts would’ve frustrated her younger self, and they likely still do, her sister said. She’s always put the team first, but she’s since matured. When Engstler was 18, she didn’t see the value in Danielle telling her she needed to focus on her fitness — but she does now, which reflects her maturity, too.

Two offseasons ago, Engstler just played pickup basketball during the offseason. She’d tell Villaplana that it was enough.

“After everything she’s learned and she’s done, I think that next year’s probably going to even be (better),” Danielle said. “There’s definitely a lot more to expect from her.”

The Orange shot 50% from 3-point range but conceded 15 turnovers. END_OF_DOCUMENT_TOKEN_TO_BE_REPLACED

John A. Lally, a former Syracuse lineman, and his wife donated $25 million to begin the transformation of Manley Field House END_OF_DOCUMENT_TOKEN_TO_BE_REPLACED