Syracuse outrebounded NC State 32-28 in the Orange's second win over the Wolfpack this season.

After both teams struggled offensively in the first half, neither could miss. Buddy Boeheim caught fire, hitting a 3 and a one-handed push shot. Alan Griffin, who scored a game-high 22 points, nailed a catch-and-shoot 3. Quincy Guerrier finished inside twice.

But early on, NC State always responded. Braxton Beverly and Thomas Allen hit 3s, Shakeel Moore swooped in for a layup, and with 10 minutes remaining, neither team had extended a lead beyond eight points.

Twenty-one of Syracuse’s 77 points on Tuesday night came off turnovers against a team that, according to KenPom, turns the ball over at an average rate.

“We defended the inside much better, and that’s why we won the game,” head coach Jim Boeheim said. “It’s not the guards. It’s really never been the guards this year. When we outrebound people or stay close, we haven’t lost a game. Every game we lost, we got dominated inside.”

The last time these teams met, on Jan. 31, Syracuse barely overcame a full first-half defensive collapse — it allowed 47 points on mostly open 3s and layups. NC State pounded the ball inside with Jericole Hellems and Manny Bates, often playing high-low with them posted at the free-throw line and baseline. SU learned from that half enough to disrupt NC State. SU plugged the middle more on Tuesday night to combat that action, Boeheim said.

“I honestly just think we just second-guessed every decision we made,” Funderburk said. “Those second-guesses left extra opportunities for them to get steals. They just gave us real fits with that zone.”

One play early on, Hellems caught a bounce pass on the left elbow, the exact spot he was so dangerous from. But this time, Marek Dolezaj stunted between him and Bates, forcing him to pause. That half-second hesitation gave Griffin enough time to crash down from the perimeter and intercept a dropoff pass. 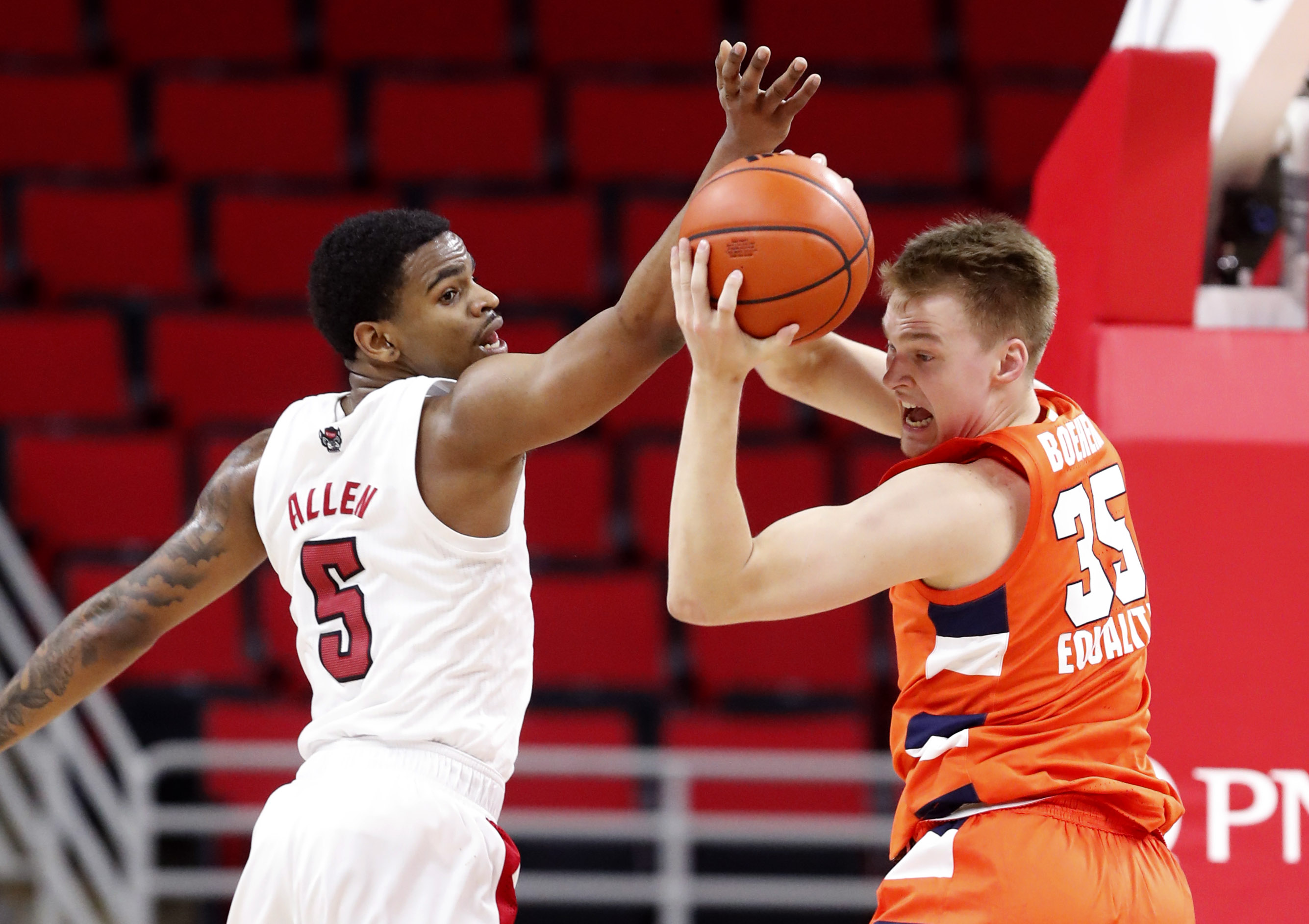 Another common mistake for the Wolfpack came when SU trapped them in the corner, a staple of SU’s scheme. This game, though, the guard from the opposite side cheated over to the offensive outlet guard, forcing tough cross-court skip passes that often went awry.

“When we trapped, we haven’t been getting any turnovers, we trapped more aggressively and got some deflections and turnovers,” Boeheim said. “We’ve been trapping people and letting them do whatever they want. Tonight we trapped them, and they walked or threw the ball away.”

Even with the careless play Tuesday night, NC State — a below average 3-point shooting team — started out hot from deep, with 3s by Hellems, Cam Hayes and Allen. SU kept NC State out of the paint, for the most part, but NC State shot 44.4%, significantly higher than the 30% that SU’s held opponents to this season.

Had NC State taken care of the ball, it likely would’ve dominated. But the Wolfpack committed 13 first-half turnovers, which led to 14 SU points. Some were careless passes, but most came off smart plays in the zone and apt anticipation.

“I felt fortunate at the half,” Wolfpack coach Kevin Keatts said. “We were down one, and we committed 13 turnovers. It actually could’ve been a lot worse because of the way we turned the ball over.”

Kadary Richmond, who lifted Syracuse in the first installment of the season series, was again explosive off the bench. One play, he drove a closeout with a jab step, jump-stopped right outside the paint and found Dolezaj under the hoop with a no-look pass.

Richmond anticipated passes around the perimeter and jumped on lazy ballhandlers. After a defensive rebound from Beverly, Richmond snuck behind him and poked it loose. A personal Richmond 6-0 run flipped a three-point deficit into a three-point lead for SU.

Though it was uncertain whether he’d play Tuesday due to what Boeheim later revealed to be a severely impacted tooth, Richmond played 25 minutes, five more than starter Joe Girard III.

Griffin was also key in forcing NC State into the first-half turnovers. While he hit contested shots on offense — he started 6-for-9 with 14 points — Griffin also crashed down low on D and altered shots. He took a charge and was often in the right position in the zone. Both he and Richmond recorded three steals.

“(Boeheim) was on my ass about rotating and getting over,” Griffin said. “It showed today.”

But the two evenly matched teams continued to trade blows. When Guerrier exited with four fouls with 10 minutes left in the second half, Griffin and Richmond stepped up. Richmond cut backdoor, caught a bounce pass and whipped a skip to Robert Braswell — who replaced Guerrier — in the corner for a 3. Then, Griffin curled around a screen and hit a tough 3 off the catch. SU’s lead extended to 65-55, the largest for either side.

When SU led 65-62, Hayes tried to lob a pass to Bates underneath, but he wasn’t ready, and the ball trickled out of bounds. A few possessions later, Hellems gave it back to SU inside for NC State’s 19th turnover — tying a season-high.

As SU strung together stops, it got buckets inside from Griffin, Guerrier, and Buddy for an 8-2 run. The Orange were also the aggressors on the glass, collecting 11 second-half offensive rebounds.

Even as NC State was in desperation mode, Syracuse continued to play the passing lanes. Braswell nearly came up with a steal on the outside, coming out of position to challenge a pass. Griffin deflected an interior pass out of bounds and intercepted a similar one seconds later. 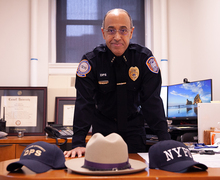 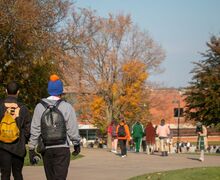 Along with providing information about the flu, Groves gave an update on mental health facilities. He said there have been around 4,800 visits to SU’s Counseling Center at the Barnes Center at The Arch this semester. END_OF_DOCUMENT_TOKEN_TO_BE_REPLACED Ryan Lavarnway spoke at Chabad Tuesday night about playing baseball with both the MLB and the Israeli National Baseball team. END_OF_DOCUMENT_TOKEN_TO_BE_REPLACED