The DOJ announced the charges on Dec. 21, the 32nd anniversary of the attack.

For over a decade, FBI agents, Department of Justice officials and Scottish authorities would meet in a room on the first floor of Bird Library to provide updates about their investigation into the 1988 bombing of Pan Am Flight 103.

The friends and family of those killed in the terrorist attack — which killed 270 people, including 35 Syracuse University students — gather with the officials each year to share stories, give speeches and hear updates on the search for answers.

For years, the investigation moved slowly.

At their meeting last October, held on Zoom, the tone shifted. More agents and officials attended than usual. “Things are going well,” one told Kara Weipz, president of Victims of Pan Am Flight 103 Inc.

After the meeting, she wrote some comments about the potential developments on a notepad and stored it away.

Weipz, whose brother Rick Monetti was one of the SU students killed in the attack, received a call from the FBI two months later: The Department of Justice would bring charges against Abu Agela Masud Kheir Al-Marimi, the man believed to have engineered the bomb that set off the deadliest terrorist attack on U.S. citizens before 9/11.

The DOJ announced the charges on Dec. 21, the 32nd anniversary of the attack.

Weipz, then in New Jersey, packed her things, found the statement she wrote back in October and drove to Washington D.C.

“I think I speak for a majority of family members when I say that we are justified, vindicated,” Weipz said two days later, standing next to then-Attorney General William Barr as he announced the charges. “Our patience and persistence proved fruitful with this decision today.”

For families who have stayed involved in the decades-long investigation, the new charges mark one more way that the tragedy and its aftermath continue to shape SU and the agencies involved in investigating the terrorist attack.

If you want to get things done, you got to make noise

Stephanie Bernstein, a board member of VPAF Inc.

Through those institutions, many friends and family members of the victims have found purpose.

One learned to talk openly about her friend through discussions with Remembrance Scholars who represent each victim. Another helped push for aviation security in honor of her husband. Another returned to SU following a broadcast news job in Albany, finding it easier to grapple with her loss away from quick news cycles and tight deadlines and closer to campus where she could find support.

“They kept it alive,” said Dick Marquise, who led the FBI investigation into the bombing from 1988 to 1992, and stayed involved until 2002. “That’s extremely important, because if you don’t keep some of these cold cases alive, I don’t think the FBI would have said ‘let’s close this since the families are no longer calling,’ but there’s no doubt that they acted as a watchdog.”

In February 1989, family members established Victims of Pan Am Flight 103 Inc. In March, the group testified in front of the Senate. In April, they held a demonstration outside the White House and met with then-President George H.W. Bush.

New legislation took off quickly. Bush created a Commission on Aviation Security and Terrorism, which provided 60 recommendations later implemented in the Aviation Security Improvement Act of 1990. President Bill Clinton signed a bill imposing harsh economic sanctions on the Libyan government, which accepted responsibility for the attack in 2003.

Meanwhile, SU began organizing its Remembrance and Lockerbie programs. The university established a collection of archives on the sixth floor of Bird Library and the Place of Remembrance, in front of the Hall of Languages, in 1990. 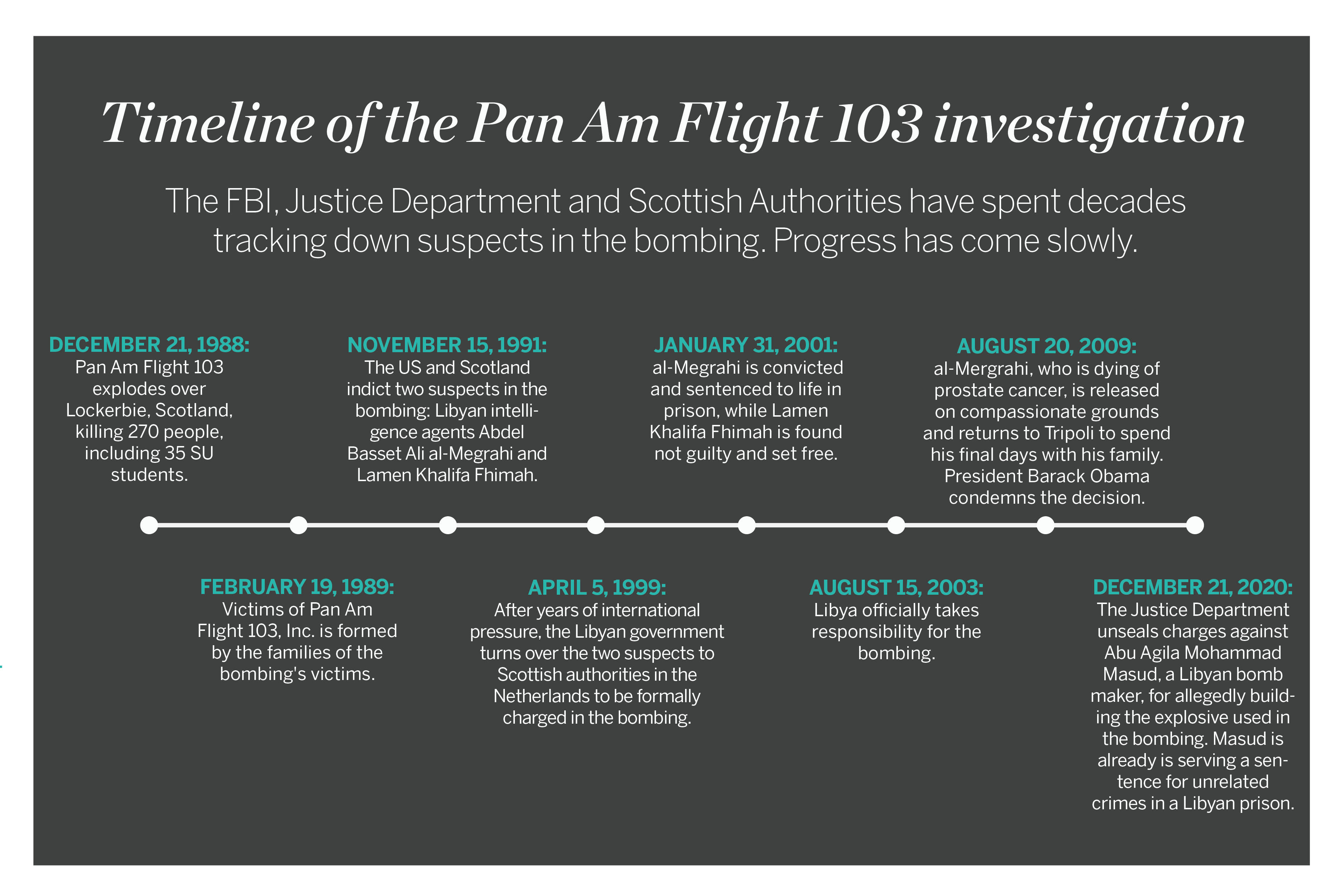 The programs on SU’s campus endured, but the attack faded from the international spotlight.

At their yearly meeting, in phone calls and in trips to Washington, family members continued to push FBI agents for updates. Many families picketed when a State Department official took a job at a Libyan-based firm, citing a conflict of interest due to highly sensitive information he had. The firm later dropped him.

In 2001, family members watched with FBI officials as Abdel Basset Ali al-Megrahi, of Libya, was convicted of orchestrating the bombing. Megrahi’s family appealed the conviction and was denied last month.

“I grew up in the 60s, so I know that if you want to get things done, you got to make noise,” said Stephanie Bernstein, a board member of VPAF Inc., whose husband, Michael Bernstein, was coming back from a DOJ assignment on Pan Am 103. “You got to be consistent. You got to be a pain in the rear. And we got good at it.”

The case became personal for some of the FBI officials who worked on it. After the VPAF board meeting each year, many officials attend SU’s rose laying ceremony. Marquise still receives a yearly invite to the memorial at Arlington National Cemetery. Barr and former FBI director Robert Mueller have both underscored the personal impact the investigation had on them.

Some FBI agents know the families personally. Bob Monetti, Weipz’s father and the former VPAF president, remembers an agent that he “pestered the hell out of” about the investigation — and soon grew close with.

More stories about Pan Am Flight 103 and Remembrance Week:

“We’re following all the leads,” the agent would tell him.

“Yeah, Michael, you read the friggin’ newspaper. ‘What the hell are you doing?’” Monetti would tease.

“I said, ‘Well, when you get to Libya, send me a postcard,’” Monetti recalled. “And don’t you know, I got a postcard.”

Bob Monetti remembers the look on his son Rick’s face as the top of the Carrier Dome became visible from Interstate 81 as they were arriving to tour SU. Rick wanted to be a sportswriter. He coached Kara’s swim team and was her “biggest supporter.” Monetti talks about him each year to the Remembrance Scholar paired with his late son.

“It’s wonderful and terrifying all at the same time,” he said of the program.

Corri Zoli, director of research in international security at SU’s Institute for National Security and Counterterrorism, said she didn’t talk about the loss of her freshman year roommate, Miriam Wolfe, before she became involved in the Remembrance program. Now she shares her story every year.

“It’s so interesting, the idea of how memories live on and how you honor people who you’ve lost,” Zoli said. “There’s lots of talk at the beginning of tragedies and lots of effort made, but to hold this effort in this consistent, productive, forward-looking fashion, for 30-plus years, it’s amazing. It’s an amazing example of what can be done with tragedy.”

The Orange shot 50% from 3-point range but conceded 15 turnovers. END_OF_DOCUMENT_TOKEN_TO_BE_REPLACED

John A. Lally, a former Syracuse lineman, and his wife donated $25 million to begin the transformation of Manley Field House END_OF_DOCUMENT_TOKEN_TO_BE_REPLACED