Cjala Surratt is one of the co-founders of Syracuse's Black Artist Collective, a group for artists of color. She is currently one of BAC's five executive committee members.

One June afternoon, shortly after the killing of George Floyd, Campbell met with fellow Syracuse locals Cjala Surratt and Qiana Williams on Surratt’s wooden deck. The three had worked together before through Everson Museum of Art’s Equity Task Force but hardly knew one another. Still, for over two hours, they brainstormed how to build a community for artists of color in Syracuse.

That first talk led to the founding of Syracuse’s Black Artist Collective. Through the collective, professional artists of color have a space to share resources on topics such as funding, and also promote one another’s work on social media.

“In (Syracuse), we talk a lot about the economic disparities that are the result of different systemic racism, but we also don’t think about how that then affects arts and culture,” said Surratt, who has been involved in the Syracuse art community for over 25 years. “I want to make sure Black and brown artists are at the table.”

BAC has also partnered with organizations like Syracuse’s Citizen Review Board, a police oversight body. The collective hopes for Syracuse to publicly provide a catalogue of people who have been killed or harmed by police. This is a part of BAC’s further goal for “advocacy, intervention and interruption,” Surratt said.

The partnership with the Citizen Review Board was also a factor in the creation of BAC’s “Say Their Names Memorial” in October. Held at Bethany Baptist Church, it allowed the community a time to heal and commemorate the people of color who lost their lives to police brutality and racial injustice.

BAC is currently in the process of vetting new members, and in January, the collective hosted “About Ya Art Business 101,” a teach-in for its Professional Practices for Artists series. Throughout February, the group plans to hold events like a Black History Month celebration with the Community Folk Art Center in addition to mixer events.

An executive committee of five members, including Surratt, Campbell and Qiana, oversees the events. After the first meeting at Surratt’s house, Campbell recruited Martikah Williams, a high school friend, to the collective, telling her, “You need to be on this. You need to be paying attention,” she recalled. Both Williams and other co-founder Alice Queen attended the second meeting that took place over the summer.

Jaleel Campbell Studios in Syracuse’s Westside neighborhood turned into the recurring meeting place for BAC’s executive board. In meetings, the committee checks in on one another and allows organic conversation to flow — “circles of healing,” Surratt called them. And besides just chatting and planning programs, they also snack on various foods like Campbell’s homemade chili.

“For us, we’ve been looking for the support for so long, but there was nothing here for it,” Martikah said. “So it kind of just became a necessity.” 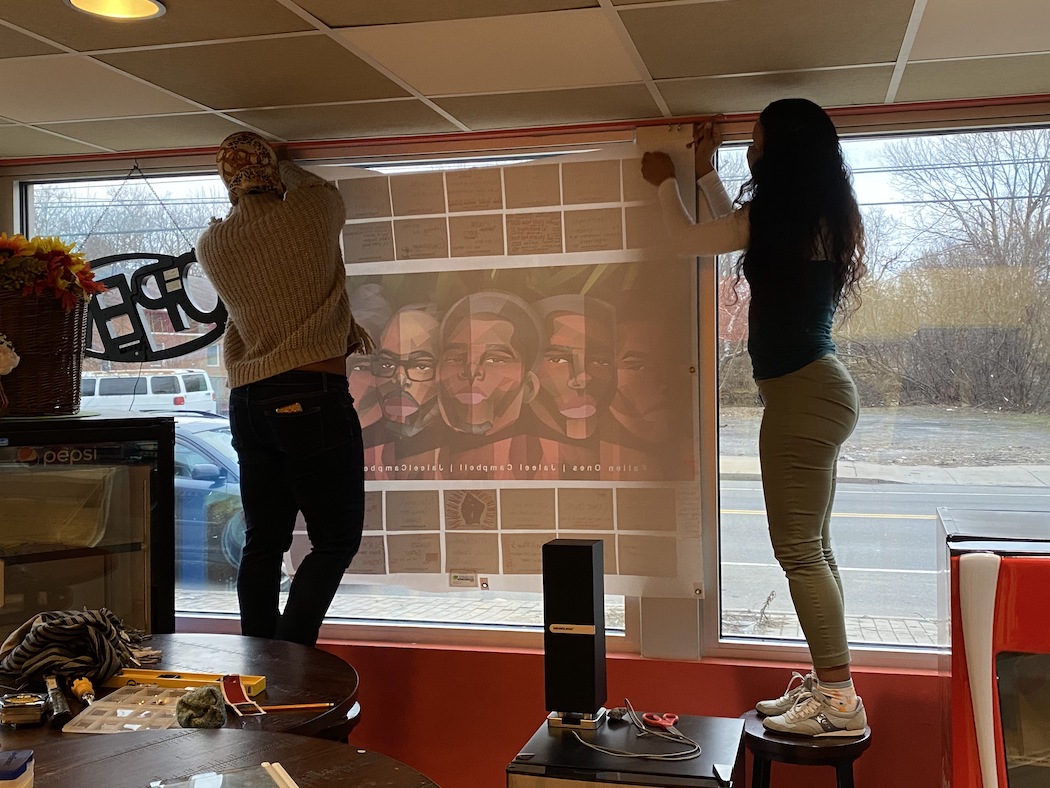 Two of Black Artist Collective’s banners are hung up at Sankofa Cafe. Courtesy of Arlaina Harris

With other “Say Their Names Memorials” happening across the country, BAC eventually decided to host one and chose Floyd’s birthday, Oct. 14, as the date.

The collective turned to Bethany Baptist Church through Martikah’s connection with the space. And for personal protective equipment, BAC raised more than $3,000 from the community. The collective also reached out to community organizers and activists like Yusuf Abdul-Qadir and Clifford Ryan to attend the memorial in October, along with singers and poets.

In October, BAC brought 6-foot-wide vinyl banners — each printed with Campbell’s 2018 illustration “Fallen Ones,” which memorializes local and national victims of police brutality — to the memorial held in Bethany Baptist Church’s parking lot. BAC collected the names of those affected by police and racial violence from attendees on paper cards. Then, after the event, BAC added them to blank spaces left on the banners during a meeting, along with drawing on embellishments such as Black power fists and different colored patterns.

“That’s really just to bring the whole piece together, so there’s a seamless kind of flow, there’s more connectedness to it,” Martikah said. “That’s just us adding another artistic layer to the banner.”

During early January, as a “part two” of the memorial, BAC hung up the banners in one of its predetermined locations at Cafe Sankofa on South Salina Street, said Arlaina Harris, a board member with the cooperative.

Working with other organizations is a part of BAC’s ongoing effort to grow. In the near future, the collective plans to recruit more members, host more events and move the banners around Syracuse. But for now, two of the three are still hoisted in the cafe’s front windows for the public to see — only before they move onto their next host.

The Orange shot 50% from 3-point range but conceded 15 turnovers. END_OF_DOCUMENT_TOKEN_TO_BE_REPLACED

John A. Lally, a former Syracuse lineman, and his wife donated $25 million to begin the transformation of Manley Field House END_OF_DOCUMENT_TOKEN_TO_BE_REPLACED