Hockey has a race problem. At Syracuse, things might be changing.

The NCAA’s Demographics Database said 93.1% of Division-I women’s college hockey respondents who identified their race were white in 2018.

Syracuse has never rostered a black player in program history. In over 30 years of coaching, Paul Flanagan hasn’t either, at any level.

But in 2020-21, Rayla Clemons, who NHL.com deemed part of the “new wave of black players ready to make an impact on hockey,” will be joining SU women’s ice hockey. She’ll be the first non-white player in the program since Emily Costales in 2015-16 and Japanese Olympian Akane Hosoyamada in 2014-15, Flanagan said.

The Orange aren’t an anomaly. According to the NCAA’s Demographics Database, there was one black women’s college hockey player in Division I in 2017 among survey respondents, the most recent full year of compiled data. There are still very real barriers for minority women trying to get into hockey, said Courtney Szto, an assistant professor at Queens University in Ontario with a doctoral degree focused on hockey, culture and race.

In the age of social media, though, where players have the platform to speak up against a lack of inclusion and diversity, there’s potential for progress, Szto said. Clemens will be joining the Orange at a time when hockey culture – an aspect the sport prides itself on – is on trial.

On Nov. 25, professional hockey player Akim Aliu sparked a public conversation about race and hockey. Like a pebble thrown into a pond, or perhaps more like a boulder, the ripple effects of his Twitter thread accusing his former coach of calling him the N-word spread across the hockey world. A world that’s been historically white.

When the NCAA’s Demographics Database was published in 2008, 94.3% of Division-I women’s college hockey respondents who identified their race were white. A decade later that percentage was 93.1%. 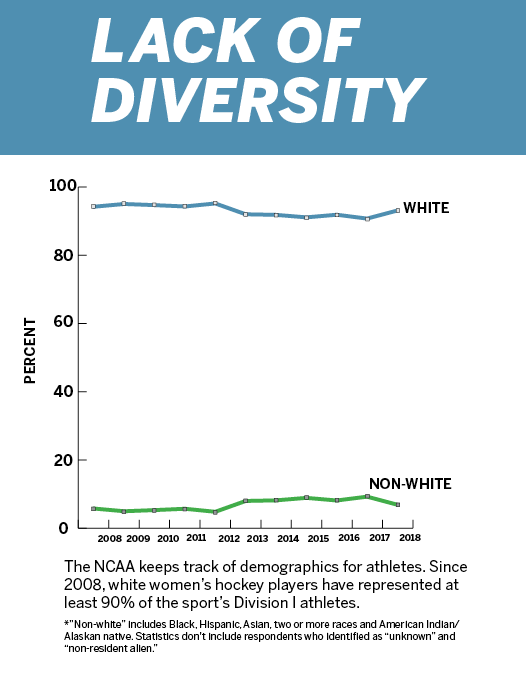 Szto said there are things that high-level hockey programs can do to increase diversity and create a more inclusive game. While many elite athletes come out of hockey academies, which are “very exclusive and very expensive,” Szto said, programs need to recruit in non-traditional locations. On top of player recruitment, programs need to hire staff and coaches from more diverse backgrounds.

Avery Mitchell, a black player for Clarkson, said young minority players having the opportunity to see people who look like themselves play can inspire their interest in a sport where stereotypes and barriers may otherwise turn them away.

“It’s one thing to say ‘yes, we recruited five players of color, we’re bringing them onto the team,’” Szto said. “But then if they come to a school that is predominantly white, and they just don’t necessarily feel welcome.”

While Syracuse defender Lindsay Eastwood said she’s “been fortunate enough to have very diverse teams growing up,” her teammate Kelli Rowswell said her youth teams were “pretty much 90% white people.” Jessica Digirolamo said there were only two people of color on her team growing up.

Hockey’s lack of diversity has created barriers that continue to self-perpetuate, barriers exacerbated by the cost of entrance — a 2013 ESPN The Magazine article estimated youth hockey can cost parents up to $48,850. The sport requires skates, a stick, a helmet, shin pads, shoulder pads, elbow pads, hockey pants and stick tape — significantly more than other sports.

Society has changed. If you don’t change with it you’re gonna be left out in the cold.

Compounding that is personal and observed discrimination, in which 44% of respondents said they experienced some or frequent racism. Hosoyamada, who played for the Orange from 2010-2015, said she never had any issues with teammates or “anyone at Cuse for that matter,” but she had challenges with opponents.

“Racial comments appeared a few times and it bothered me a little bit but can’t control what people throw at you.” Hosoyamada said. “I just decided to not let it bother me and just moved on.”

Rayla Clemons is slated to play for Syracuse, having overcome the barriers that have persisted since the NCAA’s report in 2015.

“Society has changed,” said Flanagan. “If you don’t change with it you’re gonna be left out in the cold.”

The Orange shot 50% from 3-point range but conceded 15 turnovers. END_OF_DOCUMENT_TOKEN_TO_BE_REPLACED

John A. Lally, a former Syracuse lineman, and his wife donated $25 million to begin the transformation of Manley Field House END_OF_DOCUMENT_TOKEN_TO_BE_REPLACED

In Syracuse debut, Cole Swider proves valuable even when he isn’t hitting 3s