The New York State Department of Transportation chose the community grid as the “preferred alternative” for the I-81 replacement.

Interstate 81 serves as the main route of north-south traffic through Syracuse. For Syracuse University students, I-81 is the main route to Destiny USA, New York state’s largest mall.

The highway was built in the 1950s and reached the end of its usable life in 2017. The New York State Department of Transportation released a report in April that recommended the community grid option to replace the viaduct. Under the grid option, I-81 would be torn down with traffic redirected along city streets.

I-81’s future has been discussed and analyzed for a decade. NYSDOT’s recommendation is far from a final decision. Here is a breakdown of what’s happened since the report was released.

The community grid — expected to cost $1.9 billion and take 5 years to construct — would level the existing viaduct and redirect traffic onto city streets, according to the more than 1,000-page report.

Traffic that currently uses the I-81 viaduct would be redirected to Interstate 481, which would be designated as the new I-81. A large stretch of I-81 would be redesignated as the “Business Loop 81,” a route that will lead traffic into Syracuse’s downtown business district before returning to the freeway on the other side of the city.

The other two options considered by NYSDOT’s reported — a complete rebuild of the viaduct and a tunnel — were predicted to cost more and take longer to construct than the grid.

The state is required to hold a 45-day public comment period after releasing its report.  NYSDOT held a series of open houses for community members to ask questions and share concerns about the project. More than 800 people attended the first meeting, held at the Oncenter in downtown Syracuse on June 18. 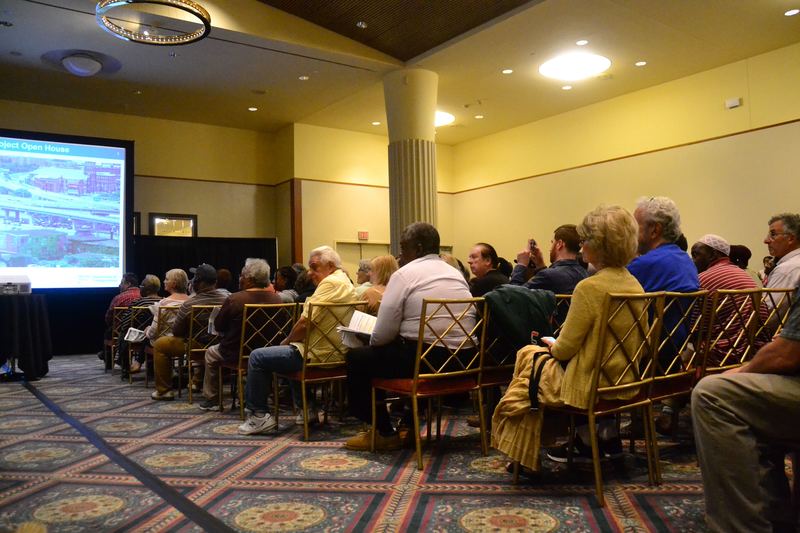 In June, over 800 residents attended the first of a series of open houses held to discuss I-81. Emma Folts | Asst. News Editor

NYSDOT also conducted four meetings in July and August for residents to comment on highway noise that would be created by the grid, Syracuse.com reported.

Property owners and renters who live in areas expected to see noise levels of 67 decibels or more — about 700 people in total — can vote on whether noise barriers should be installed along the highway. For installation to occur, at least half of those eligible to vote must submit a response, and half of those responses must be in favor of barriers. Voting ends on Sept. 5.

The owners of Destiny USA hired the prestigious Whitmer & Worrall lobbying firm to influence the federal government regarding its decision on Syracuse I-81’s replacement, Syracuse.com reported.

Stephen Congel, CEO of the Pyramid Management Group that owns the mall, said he was concerned about the effect the grid would have on the mall, per Syracuse.com. Destiny USA’s owners have spent $170,000 on lobbying the government about I-81 since 2017, Syracuse.com reported.

July: Questions, concerns remain for some

Eighteen central New York lawmakers opposing the community grid gathered at a press conference on July 16 to demand analysis of the grid’s potential economic impact on areas surrounding Syracuse, Syracuse.com reported. Those in attendance said the state did not examine potential negative effects that eliminating the viaduct could have on the north side of the city and the towns of Salina and Cicero.

Even among advocates of the grid, some concerns remain. The Syracuse Housing Authority, a supporter of the grid, published a letter with suggestions for the project’s construction, Syracuse.com reported. SHA owns and manages properties in Syracuse, including Pioneer Homes and Toomey Abbott Towers, which sit near the I-81 viaduct.

SHA’s suggestions include sound proof windows for those affected by construction noise; air conditioning in Toomey to decrease noise and air quality problems by allowing for windows to remain closed; and testing for respiratory illnesses before and after construction.

Syracuse Mayor Ben Walsh, a longtime supporter of the grid, detailed his plan to help the Syracuse community prepare for the I-81 replacement project at an Aug. 9 panel, Syracuse.com reported.

Walsh’s administration is working with economic strategy firm CenterState CEO to determine jobs and skills needed for the I-81 project. Collaborating with local trade groups, Walsh will then work to match employees with employers. He is also creating a group of experts to help review NYSDOT’s report.

Next steps in developing the I-81 project

Once the public’s comments are reviewed, a final report will be released, followed by another waiting period. The final report is not expected to be released until 2020. After that, the state and federal government will make the final decision on the I-81 viaduct renovation project.

The Orange shot 50% from 3-point range but conceded 15 turnovers. END_OF_DOCUMENT_TOKEN_TO_BE_REPLACED

John A. Lally, a former Syracuse lineman, and his wife donated $25 million to begin the transformation of Manley Field House END_OF_DOCUMENT_TOKEN_TO_BE_REPLACED