Gianmarco Castronovo, who will not return to SU, was a broadcast and digital journalism major. The charges were filed in 2017 in Monmouth County, New Jersey, where he lived.

Gianmarco Castronovo, a former rising sophomore broadcast and digital journalism student, is no longer enrolled at Syracuse University after being identified as the alleged perpetrator of a sexual assault in New Jersey.

In a family court case where he is referred to only as G.M.C., Castronovo, then 16, was accused of sexually assaulting a girl, also 16, at a house party in New Jersey. She was visibly intoxicated, slurring her speech and stumbling, according to prosecutors in Monmouth County, New Jersey. He filmed the assault and later shared the video with friends, prosecutors said.

He later texted his friends, “When your first time having sex is rape,” prosecutors said. The case recently made national news, including an article by The New York Times, because the presiding family court judge decided it wasn’t rape, and denied the prosecutor’s request to charge Castronovo as an adult.

“He is clearly a candidate for not just college but probably for a good college,” Judge James Troiano said in 2018. “His scores for college entry were very high.”

Troiano’s ruling became public after an appeals court issued a 14-page ruling in June that reversed the judge’s decision and warned him against being biased in favor of affluent teenagers. Family court proceedings are not usually public. The victim is referred to as Mary in the court papers, an alias to protect her identity.

The Daily Orange investigated whether G.M.C. and Castronovo were the same person after several people on Twitter connected the former SU student to the case. Castronovo’s identification as G.M.C. on social media led to calls for the university to take action against him. 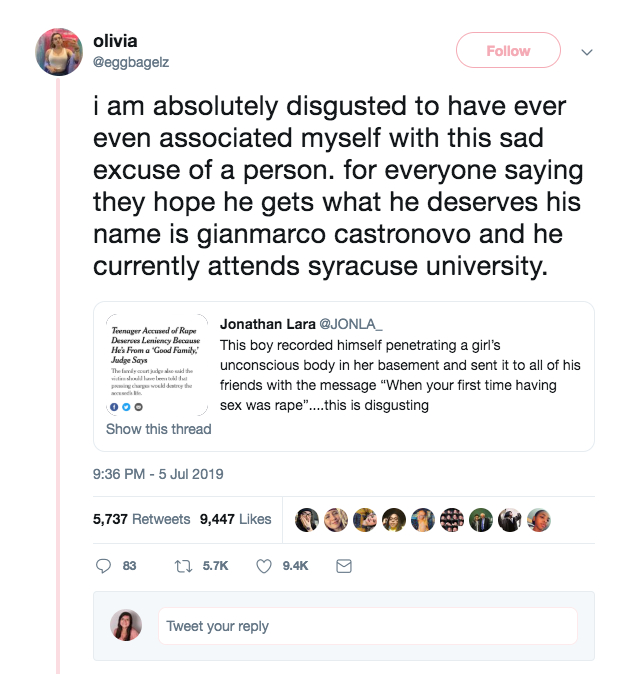 The D.O. named Castronovo in its request to SU for comment and provided a link to the Times article detailing the allegations against G.M.C.

Sarah Scalese, senior associate vice president for university communications, said in a Tuesday response to The D.O. that “the individual in question” is no longer a student at SU.

“The individual in question is no longer a student at Syracuse University,” Scalese said in an email response to The D.O. She added that “Syracuse University does not tolerate sexual and relationship violence of any kind, including incidents that occur off campus.”

The university declined to confirm whether he willingly left or was expelled, citing federal privacy laws. The same statement emailed to The D.O. was posted on SU News, the university’s press outlet, and does not name Castronovo.

Family court records describing the case weren’t made public until the appeals court’s ruling in June, more than a year after Castronovo’s acceptance into SU’s Class of 2022. 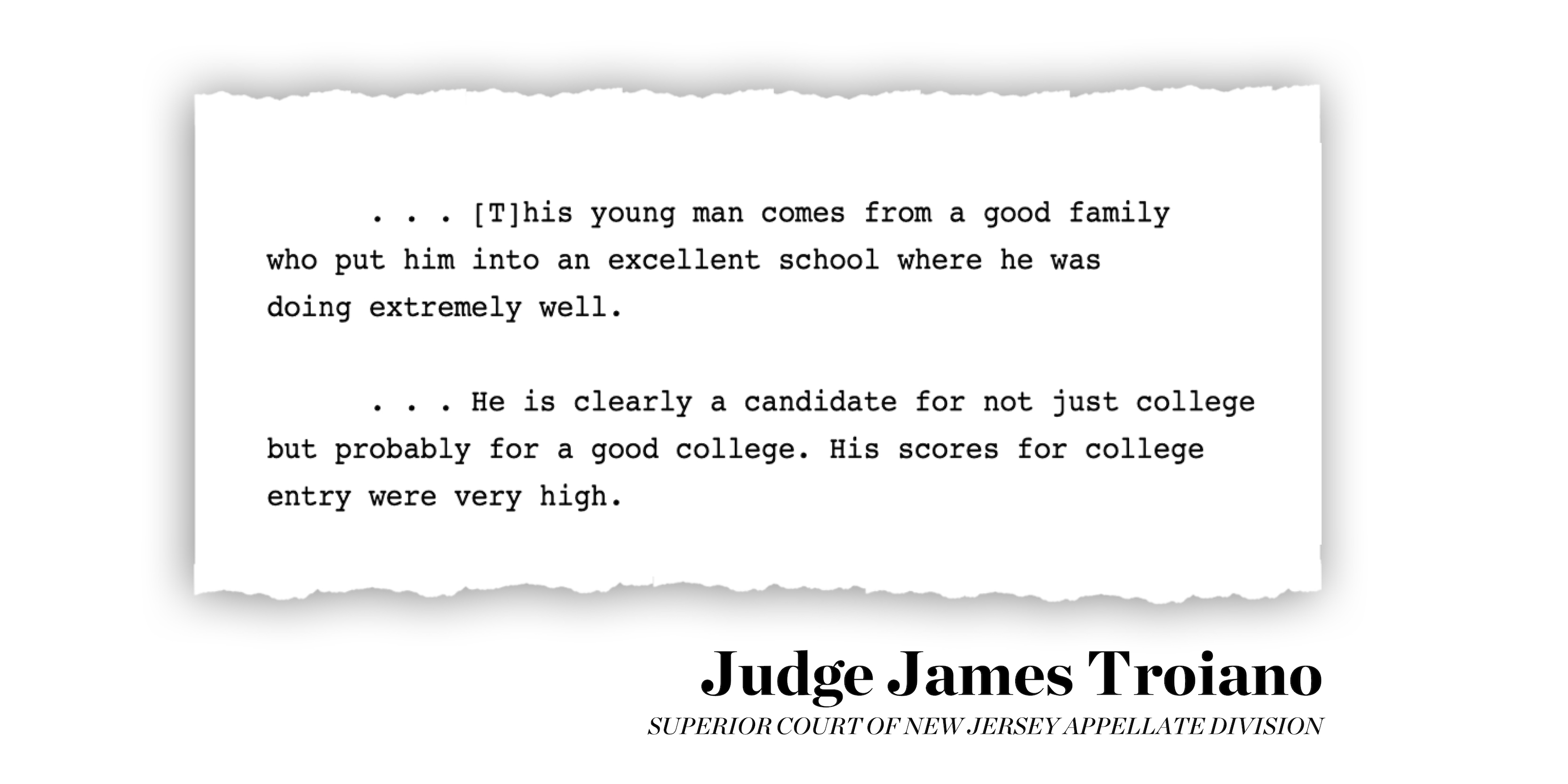 Castronovo was a member of the Sigma Phi Epsilon fraternity at SU but has since been removed from a GroupMe chat involving members of the fraternity and an SU sorority. John Macce, president of the chapter, issued a statement to several sororities, obtained by The D.O., that denounced the actions of a suspended member who was “accused of a horrible crime while he was a high school student.”

Macce did not name Castronovo but said the suspended member had informed the chapter’s executive board that he planned to withdraw from SU. His message also said the fraternity is currently in contact with the Title IX office and that the fraternity will continue to educate members regarding “sexual behavior.”

“As a fraternity, Sigma Phi Epsilon — New York Alpha wholeheartedly denounces the alleged actions of our since suspended member,” he said.

Macce did not respond to requests for comment from The D.O., nor did the presidents of SU’s Interfraternity Council or Panhellenic Council. Andrew Miltenberg, one of Castronovo’s lawyers who specializes in sexual assault cases, declined to comment for this article. The Office of Fraternity and Sorority Affairs and the Title IX office at SU didn’t respond to requests for comment.

Castronovo attended Christian Brothers Academy, a Catholic school in Lincroft, New Jersey, at the time of the alleged assault, said three people familiar with the matter who declined to be named for this article.

Troiano, in his 2018 ruling, detailed G.M.C.’s extracurricular activities as he called for leniency. Among those was being an Eagle Scout, the highest achievement in the Boys Scouts of America. Castronovo was recognized in a 2015 religious awards ceremony for Catholic Boy Scouts at the St. Thomas More Parish in Manalapan, according to The Trenton Monitor, the official newspaper of the Catholic Diocese of Trenton.

As the case made national headlines for Troiano’s decision, an individual who said she had known Castronovo since before first grade noticed striking parallels between the court case allegations and an incident involving Castronovo.

“The timeline in which that case takes place and the said incident that Gianmarco took place matches perfectly,” said the individual, who declined to be named in this article.

“There were rumors involving Gianmarco recording a video of him” taping a sexual encounter with “a girl at a party and then sending it in a group chat,” the individual said. “And the location that’s mentioned — the only location that they mentioned in the court document is Monmouth County, New Jersey. That’s where he lived. Gianmarco perfectly fits the profile of the person.”

A former Christian Brothers Academy student who was in Castronovo’s grade told The D.O. that certain details of the case had been “general knowledge” among many school community members before details went public this year. The student declined to use his name for this story.

The reversal of Troiano’s decision puts the case on track to be prosecuted in criminal court. First degree aggravated sexual assault — one of the five charges prosecutors brought against Castronovo — carries a jail sentence of up to 20 years in New Jersey.

The alleged assault occurred in the basement of a home during a pajama party where alcohol was consumed, prosecutors said. The date and location of the party within New Jersey is not specified in the court papers. Mary was visibly drunk, stumbling with slurred speech, as Castronovo led her to the basement gym, prosecutors said.

“While on the sofa, a group of boys sprayed Febreze on Mary’s bottom and slapped it with such force that the following day she had hand marks on her buttocks,” according to court documents.

During the assault, the lights in the basement stayed off, and a foosball table blocked the door, prosecutors said. Castronovo left the room when he was done, and his friends became concerned about Mary’s well-being, according to court documents. She vomited on the floor and was later driven home by a friend’s mom.

The next morning, Mary told her mom that she feared “sexual things had happened at the party,” according to court documents. She was confused about the bruises on her body and her torn clothing. Over the next several months, she learned that Castronovo had shared the video among his friends and their mutual acquaintances, prosecutors said.

She confronted Castronovo about the video, but he denied recording it and claimed their friends were lying, prosecutors said. Castronovo, however, continued to share the video and Mary’s mother contacted the authorities, according to court documents.

“This was neither a childish misinterpretation of the situation, nor was it a misunderstanding,” prosecutors said. “G.M.C.’s behavior was calculated and cruel.”

Christopher Gramiccioni, the Monmouth County prosecutor, said in a statement to The D.O. that he was “grateful” that the appeal’s court agreed with his office’s waiver to try the case in adult court.

“As with all cases, we are assessing our next steps, which will include discussions with the victim and her family,” Gramiccioni said.

Blueprint 15 formed partially in response to concerns around displacement that could result from the impending Interstate-81 removal project. END_OF_DOCUMENT_TOKEN_TO_BE_REPLACED

The vigil started with a speech and introduction by Nia Williams and Jacob McGraw, peer educators of the STOP Bias and Hate Initiative. END_OF_DOCUMENT_TOKEN_TO_BE_REPLACED

Neal Powless spoke with The Daily Orange on what he has changed in the program since the 2019-2020 report. END_OF_DOCUMENT_TOKEN_TO_BE_REPLACED