Craig Forth was once a national championship winning center for Syracuse. Now he devotes his time to his students as a junior high principal.

As a hoard of third-graders journeyed down a hall in Liverpool’s Long Branch Elementary school, a two-party conversation far behind the end of the line gained life. One of its participants learned at a pre-K level despite his third-grade placement. His partner in chatter, a student teacher, was a few months away from earning a degree from Syracuse University.

The student, like most kids that age, didn’t stand much taller than 4 feet. The student teacher towered at 7 feet tall. Yet there was Craig Forth, a little less than two years removed from a 2003 national championship season and still garnering celebrity treatment because of it, chatting it up with a child. Not because he had to. Because he wanted to. With ample differences — intellectually and physically — they connected. The conversation leveled them.

“They were having a really engaging and honest and true and caring conversation,” said Tom Bull, Forth’s host teacher at Long Branch who now works in SU’s School of Education as the director of field relations. “That’s big-time.”

That moment, just a small snippet out of the many weeks Forth spent during that fall 2004 semester at Long Branch, is how Forth — the starting center on SU’s only men’s basketball team to win it all — operates in a school setting. His nearly lifelong belief in inclusivity and desire to educate, which first sprouted in him as a child, are what took him to SU.

They’re what drives him now, as he serves in his second year as the principal of Mechanicville Junior High School in the suburbs of Albany. They are what helped him fit in at Long Branch and connect with not only that one student, but a student body.

That was more than a decade ago, though. Now, with his college days even further behind, it remains the case. Craig Forth the athlete is gone. He graduated in 2005 and then spent a year playing pro ball in Europe learning what he already knew: He wanted to teach. He saw no reason in delaying that. Forth and his wife, Amanda, came home, and he began teaching first grade in his hometown of East Greenbush while also coaching the girls’ JV team at Columbia High School in town.

Forth’s aspiration to teach was nothing new. His fourth grade teacher picked him to help out in a special needs class on a regular basis. He loved being able to influence the students’ growth. At home, his younger brother, Jeremy, lived with autism. Forth watched his mother, Maggie, dedicate herself to helping Jeremy when her son had to switch schools a handful of times. The fact that Jeremy struggled to find the proper fit troubled Forth. He wanted to help.

That passion steered Forth to Syracuse when basketball presented a path to college. Syracuse became the right choice because there he could earn dual certification in elementary and special education in just four years. Boston College, another top choice, offered a similar program in five. He joined Jim Boeheim’s team and majored in inclusive education.

“The core of who he is as an administrator and what he was as an educator, were formed (at SU),” Bull said. “He’s not afraid to be assertive. Never afraid to be a leader.” 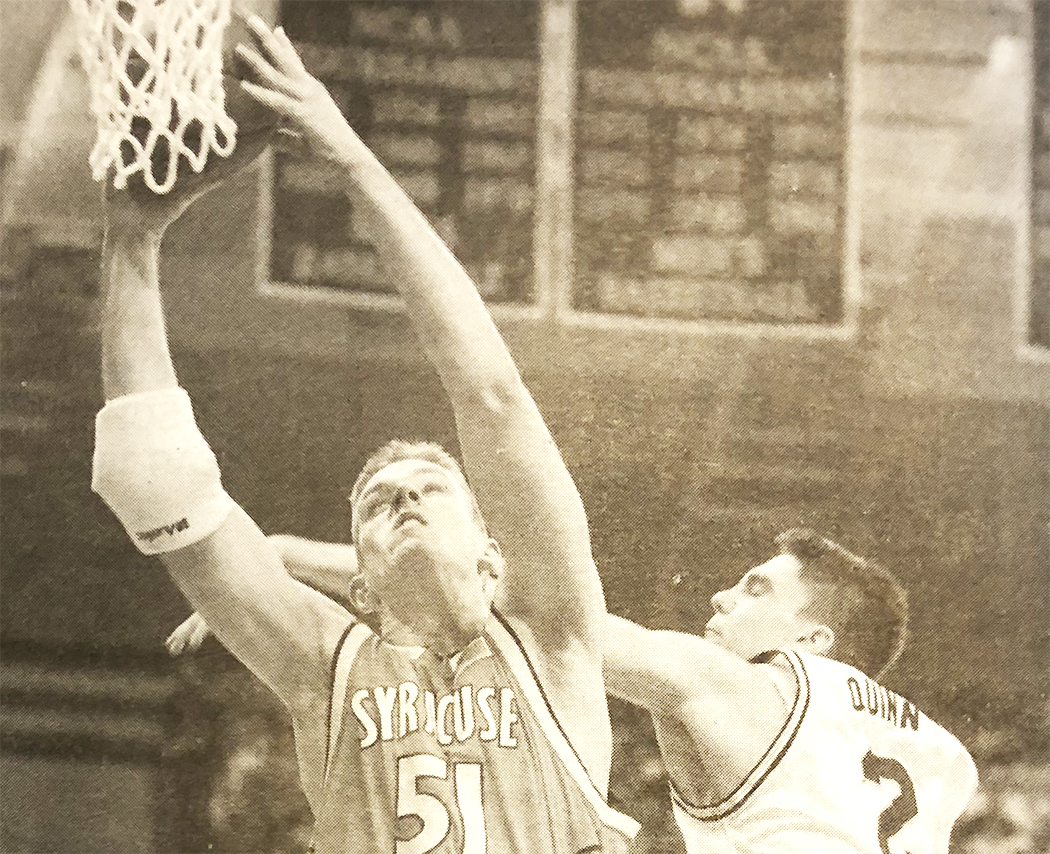 Those are the qualities Forth took with him when he moved on from first grade and assumed the role of assistant principal at Mechanicville High School in 2013. It was a culture shock, Forth said, to jump that wide of an age gap. The students don’t depend on him as much as first graders did. But it was worthwhile.

For about four years, Forth worked under Mechanicville High’s principal, Kevin Kolakowski, until being named principal of the district’s junior high school in June 2016. Kolakowski praised Forth’s leadership style, citing a “detail-oriented” approach and an instillment of a “positive culture” that has maintained a productive climate within their 6-through-12 building.

“If there’s an issue that arises or if a poor decision is made, it’s not ground and pound,” Kolakowski said. “It is, ‘let us work this out and let’s learn from our mistakes.’”

Since starting as principal, Forth’s belief in inclusion has remained. He’s championed anti-bullying efforts and had Mechanicville qualified as a No Place for Hate school, an initiative kicked off by the Anti-Defamation League that now includes more than 1,600 schools nationwide.

On a daily basis, Forth is usually sitting in on classes to evaluate teachers or handling student discipline. The latter is when basketball often creeps back into his life. Forth said he usually takes a sports angle with kids because it will help them relate. He recently had a conversation with a student who had lashed out at a bothersome classmate. The situation, Forth explained, was not unlike a low-post battle where a defender is constantly fouling with no whistles and the retaliator is the one who picks up a foul.

Otherwise, Forth doesn’t do nearly as much with basketball as he did years ago. He’ll step on a court and play maybe once a year. Any time he does, five-on-five becomes everyone-against-Craig. He struggles to find competition that isn’t trying to knock off the former national champ.

He attends most of Mechanicville’s games, but that’s more out of duty as principal. He’ll stop by practice here and there to offer help with post moves. But at 34, with three kids between the ages of 1 and 7, he doesn’t have the hours to coach full time anymore. He jokes that his job is where he gets to relax compared to the stresses of being a dad at home.

“I’d probably be divorced if I continued to try to coach,” Forth joked.

Despite Forth’s dormant game, 15 years later, his basketball legacy remains. The 2003 banner is never coming down in the Carrier Dome. And back at Long Branch, where Forth balanced basketball and the foundation of the future he knew he wanted, another artifact of his former self survives. Even though Forth was there in the fall, he returned for the student-faculty basketball game in the spring, just before graduation. He played with the students.

Having “Mr. Forth” make a surprise return made the gym erupt. At one point, with a move usually reserved for teammates with a chemistry that takes time to form, a student hoisted the ball to the rim. Forth tracked it. He lept, corralled the orange sphere and crushed an ally-oop slam dunk in an elementary school gym.

The rim was not made for such abuse. It bent, was removed and is still in possession of one Long Branch’s teachers to this day.

The Orange shot 50% from 3-point range but conceded 15 turnovers. END_OF_DOCUMENT_TOKEN_TO_BE_REPLACED

John A. Lally, a former Syracuse lineman, and his wife donated $25 million to begin the transformation of Manley Field House END_OF_DOCUMENT_TOKEN_TO_BE_REPLACED

Sex and health : Don't sweat it: perspiration is natural, but shameful situations are easy to manage

SU students should be required to take technology literacy courses