Justyn Knight, arguably the greatest SU runner of all time, is looking for his first individual national championship

Justyn Knight has finished in the top 5 in each of the last two years at the NCAA championships. He's got one more shot to come in first on Saturday.

For two years, across three seasons, Justyn Knight couldn’t beat Oregon’s Edward Cheserek. No one could. Cheserek, or “the King” as he was called, finished his college career as a 17-time national champion in 21 possible events. But, at the cross-country national championship last year, Knight finished ahead of him.

Then he ran into another problem: Villanova’s Patrick Tiernan. Knight prefers a sit-and-kick type race, where the runners don’t burn themselves out during the race, but then sprint ahead at the end. Tiernan set the pace that day, and made sure he didn’t let Knight kick. Instead, he burned the last mile, forcing Knight to chase, preventing a strong kick.

“Sometimes you have your day,” Syracuse assistant coach Adam Smith said, “and that day was Tiernan’s day.”

Cheserek and Tiernan were both experienced runners in their last year of eligibility. Knight was one of the favorites, but not the favorite. In all cross-country disciplines, outdoor and indoor track, Knight has had his share of chances to claim an individual national title, but hasn’t won one yet.

Knight is the best runner in Syracuse history, with two top-five finishes in three years at the national championship. When Knight began his college career, Syracuse was a middle-of-the-pack finisher at nationals, unable to get over the hump. Knight turned the team into a perennial top-three team and national champion in 2015. He has carried the program on his back while making his teammates better. But he has never captured an individual cross-country championship. On Saturday, he has one final opportunity to do it.

“I don’t go into any race racing for second,” Knight said.

In 2016, Knight missed qualifying for the Olympics by 0.1 seconds, his mother Jennifer said. That November, Tiernan beat Knight at the national championship. Come 2017, he qualified for the World Championships in the 5,000-meter. When it turned to race time, a familiar face lurked in the finals. It was Tiernan.

With five laps to go, Tiernan moved into the lead, quickening the pace by two seconds. But Knight didn’t budge. He stayed with the pack, gradually chasing down the man that beat him a year earlier.

Tiernan couldn’t maintain his pace, and Knight only sped up, inching closer and closer. Knight finished in ninth place in his first appearance on the world stage. Tiernan took 11th.

“If he doesn’t win,” former SU runner Martin Hehir said, “he’s just going to come back with a vengeance.

Knight’s talent matches his flare to make him one of the most well-known runners in the world. As one of the nation’s most dominant athletes, he’s commanded attention from everyone, including his teammates. They want to run with him.

Everyone’s always wanted to run with him.

When the St. Michael Catholic (Ontario, Canada) High School runner was just beginning to rise to local stardom, his head coach, Frank Bergin, found him waiting at the track after practice. Everyone else was gone, and Bergin was on his way out, but Knight was waiting for two kids from the nearby elementary school, who couldn’t have been older than 11, Bergin said. The two had seen Knight run and asked him to run a lap with them after school. So Knight waited and ran with them.

Once Knight arrived on Syracuse’s campus two years later, he made an immediate impact, running in the national championship his true freshman season.

By his sophomore season in 2015, Knight emerged as one of the best runners in the country. Hehir had always been the runner that teammates modeled themselves after. Soon, even for Hehir, that runner became Knight. 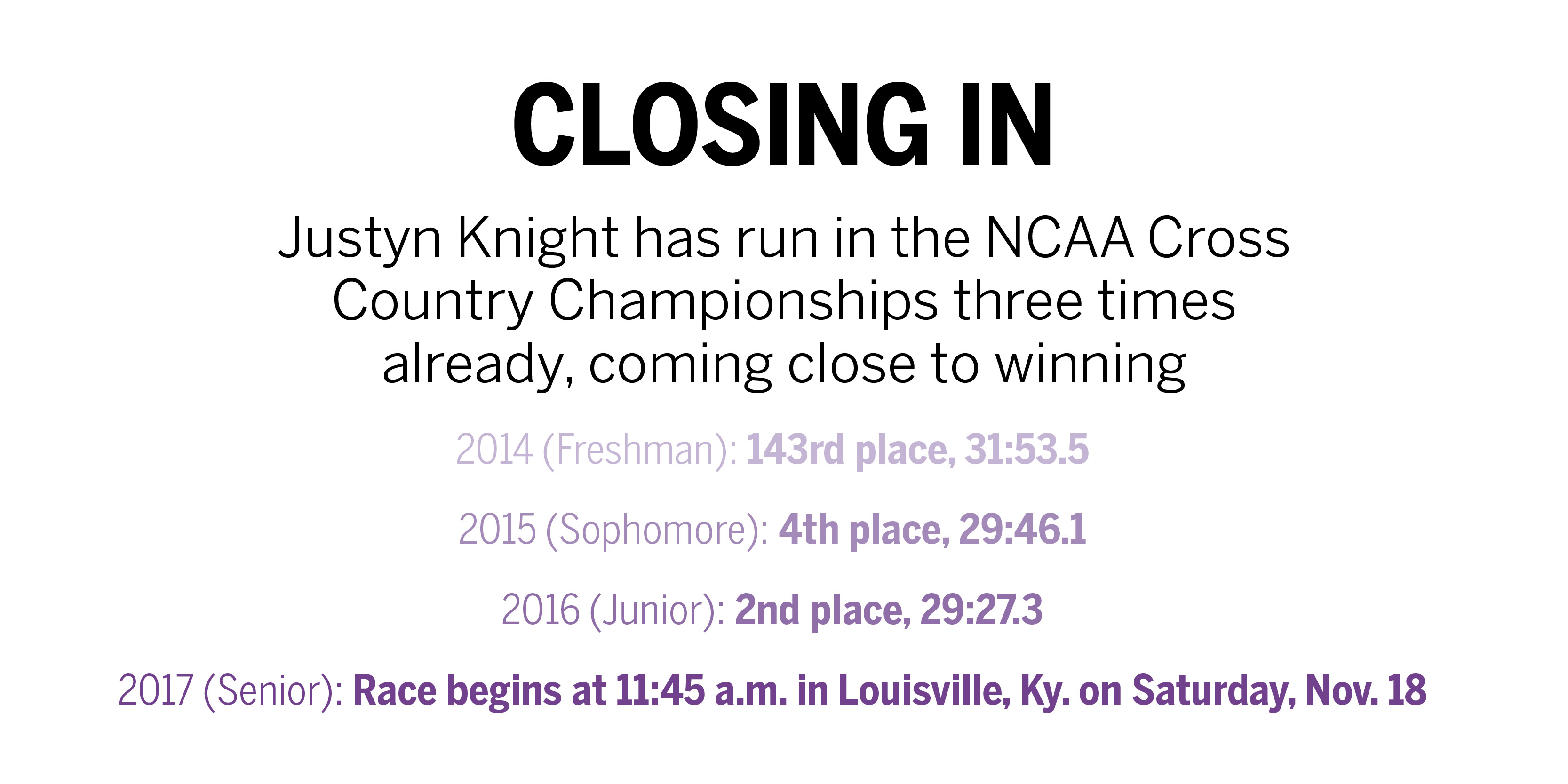 One of the reasons that Hehir excelled so much as a senior, Smith said, was because Knight took the pressure off Hehir and let him run freely.

The pair, along with emerging star Colin Bennie, led Syracuse to its first national championship in 64 years. When Bennie arrived at campus, like many, he copied Hehir’s model. But in 2015, he mimicked Knight.

“Justyn being the guy to keep with,” Bennie’s mother Lisa said, “is the best training situation Colin could be in.”

The entire time Knight trained for worlds, he checked on his teammate’s summer training, Jennifer said. In between workouts this summer in Vaughan, Ontario, Knight’s phone would be littered with messages from younger runners asking how his training was going, but also asking questions about their own training and how to prepare for the fall.

Syracuse head coach Chris Fox traveled to London this summer for Knight’s race. As soon as it was over, Knight found his coach.

“‘Let’s get ready for cross-country,’” he said to Fox.

Throughout this season, Knight has worked to ensure his teammates are ready to battle at NCAAs. He sets the tones in workouts, checks in on how his teammates train and recover and takes on his own coaching responsibilities as the team’s leader. All his preparations have lined up for this Saturday, when Knight has one final attempt at a cross-country crown.

“I think it’s a pretty fitting final chapter for him to put his mark on,” Hehir said. “The fact that he hasn’t won a title yet chomps this up to make it even sweeter. It could be a storybook ending.”

Knight loves the pressure and the spotlight, but he’s had to adjust to it. Being the favorite is something he’s struggled with in the past. After he rose to prominence in 2015, the lights shined brighter and the microphones in his face multiplied. He felt overwhelmed. But he’s learned to embrace it and use the added attention to take the pressure off of his team.

No matter the finish, Saturday’s race will bring an end to the greatest cross-country career a Syracuse runner has ever had.

“I’m 30 years old and I don’t think that I will ever have another Justyn in my coaching career,” Smith said. “He is a once in a lifetime talent.”

And on Saturday afternoon, he can capture the one thing that’s eluded him.

The Orange shot 29% from the field and 22% from beyond the arc against the Rams in their Battle 4 Atlantis opener. END_OF_DOCUMENT_TOKEN_TO_BE_REPLACED

The Orange shot 50% from 3-point range but conceded 15 turnovers. END_OF_DOCUMENT_TOKEN_TO_BE_REPLACED

Letter to the Editor