An image problem could be why the Greater Syracuse Land Bank lost $1.5 million in funding

Chamar Otis, sales specialist for the Land Bank, said the real value in his job is seeing the pride on people's faces when they transform a property into a home.

Off South Salina Street and Belle Avenue stood a house with no running water or electricity. For seven years the property kept getting passed over for inspection by the city of Syracuse.

When the Greater Syracuse Land Bank took over the house, its cleanup person had to break through the back door to get in. He heard a sound, and when he turned the corner, he found two elderly women, terrified of the intruder.

With the help of his wife, he explained the situation — they had acquired the property and had to do an inspection. The women calmed down, but their serenity was fleeting. As the couple approached the kitchen, the women’s tears were audible, recounted Chamar Otis, sales specialist for the Land Bank. 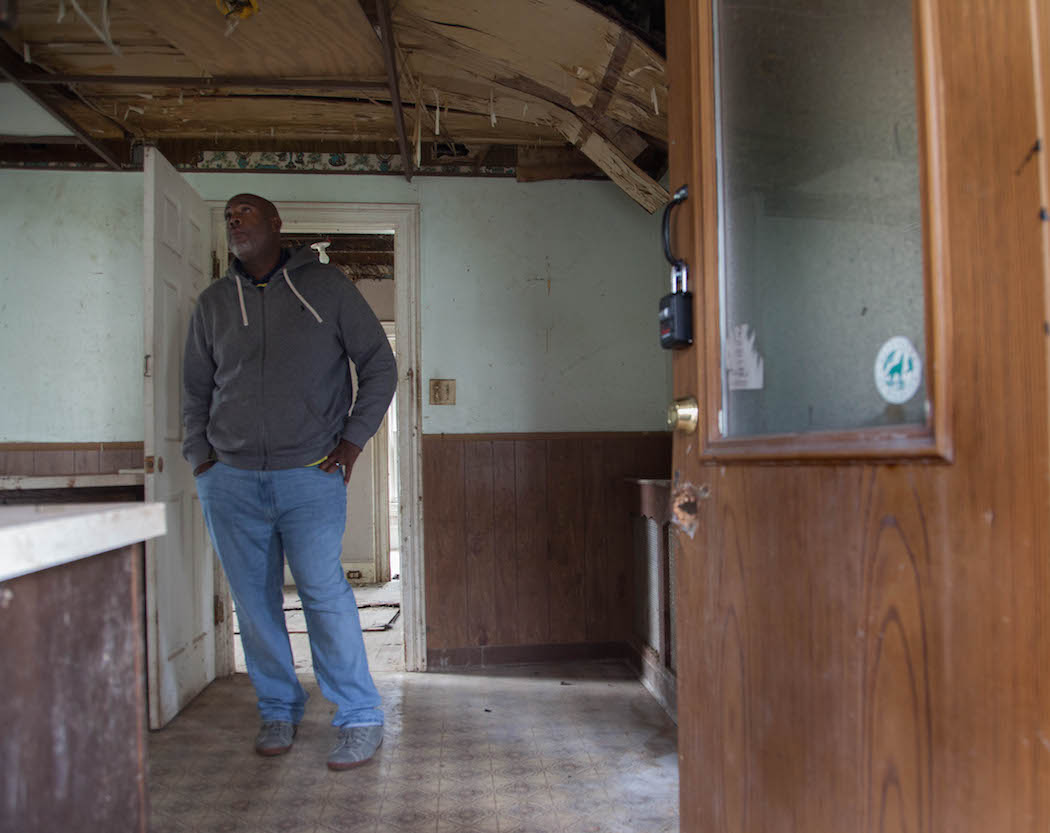 Seven years without running water or electricity translated into no indoor plumbing. Lacking a restroom they resorted to defecating in plastic bags. They would crack open the door of a room, toss the bag in and shut the smell behind them, not to be faced with it until the next time. Seven years of this process resulted in 3 tons of human waste,  Otis said.

The women, through a partnership with Catholic Charities, were relocated to a proper home with plumbing and electricity, Otis said. As for the house, it was sold and is currently in the “prehabilitation” process.

The Land Bank is a nonprofit organization and local public authority. The organization acquires the city’s vacant, abandoned, underutilized and tax-delinquent houses and puts them to productive use by selling them for redevelopment or demolishing them and repurposing the land. In its five years, the organization has sold 480 properties, acquired 1,385 and completed 185 demolitions.

But now the Land Bank is stuck — because of its image problem.

The Syracuse Common Council voted over the summer to take away the $1.5 million the city allocated yearly to the Land Bank. A decision Katelyn Wright, executive director of the Land Bank, has appealed regularly at Council meetings. 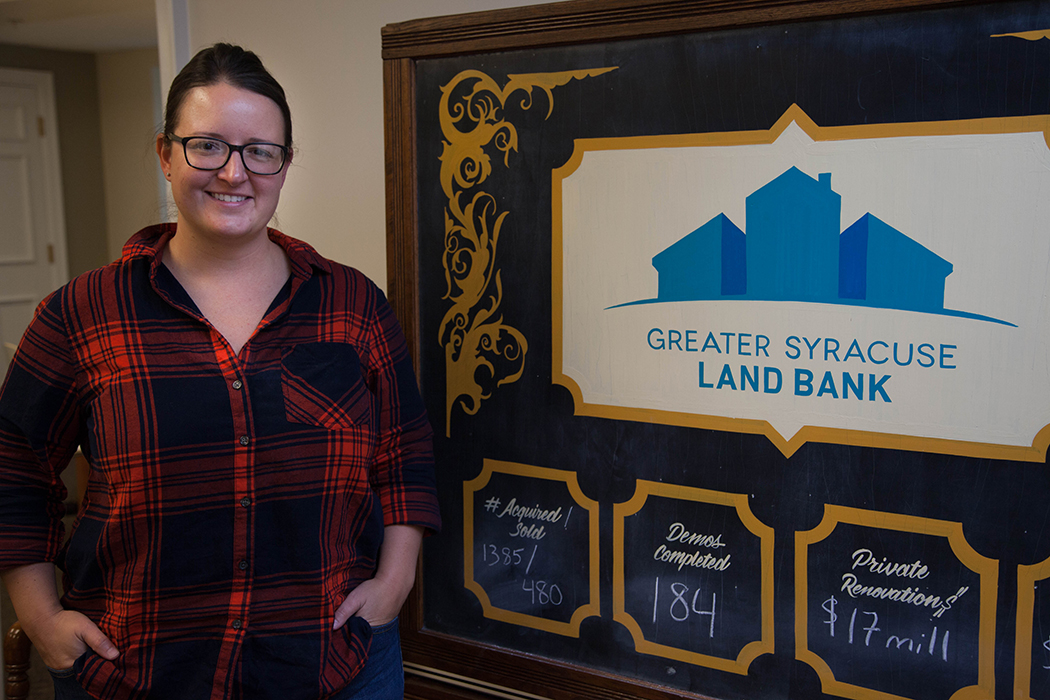 About 300 houses owned by the Land Bank are spread throughout the city. The decrepit houses — with peeling paint, broken windows and rotting wood — bear the same white and green sign proclaiming the Land Bank’s ownership.

“They’re sitting there with our sign on it and people see them every day and go, ‘Why isn’t the Land Bank doing anything with that property?” Wright said. “That’s the cause of a lot of these perception issues.”

People unhappy with the Land Bank’s perceived inaction take to calling their common councilor. What people don’t see is the end product of the Land Bank, Wright said.

A young woman bought a house on the 100 block of Ostrander for about $10,000.  A few months and about $30,000 later, the house looks like it belongs in better kept areas like Liverpool or DeWitt, Otis said. That’s where the value is — in being able to create homeowners, and especially minority homeowners. The value is in seeing the pride on the face when they transform a property into a home.

“It’s their home,” Otis said. “They’re trying to leave a legacy for their children and have something for when they pass on.” 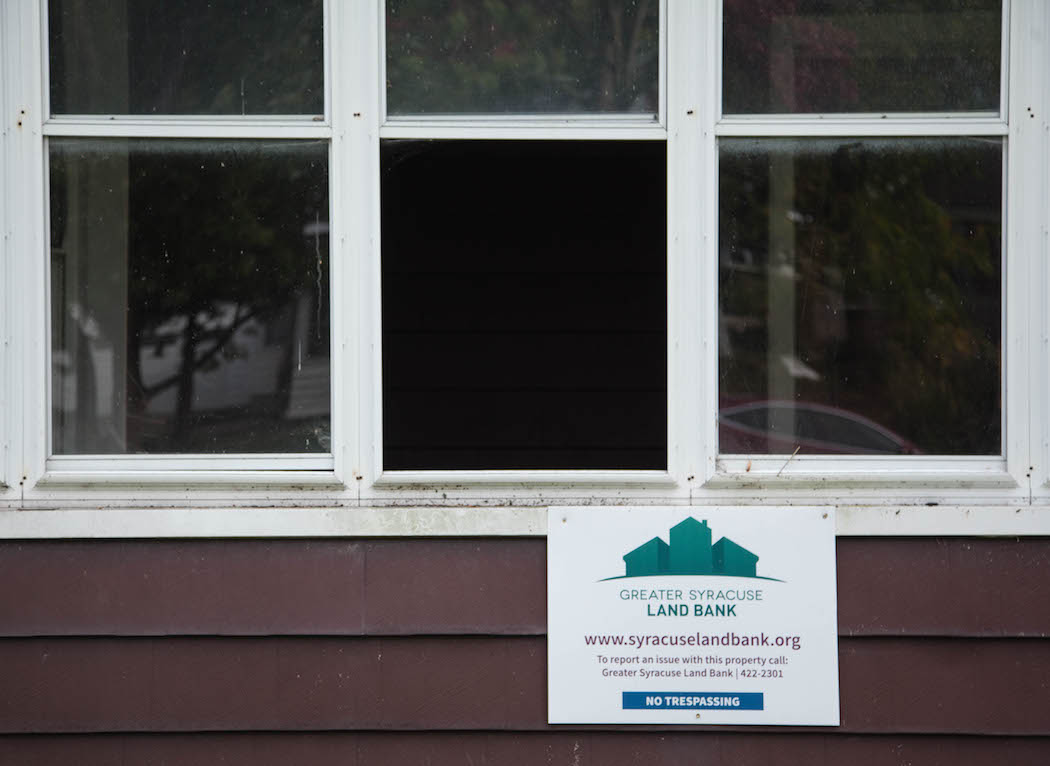 But by then the house has been sold and the Land Bank sign had come down.

“(The community) isn’t associating that happy ending with the Land Bank,” Wright said.

The foreclosures are what people most associate with the Land Bank, said Liam Kirst, former community outreach coordinator. Per their partnership, the city goes out and forecloses on tax-delinquent properties in order for the Land Bank to gain control of the site.

“The city is out there foreclosing on people and they kind of view the Land Bank as a partner in this big bad process where the government is coming to take their house,” Wright said.

But the goal isn’t displacement. Occupants of foreclosed homes usually fall under three categories: homeowner who fell on hard times, tenant whose landlord wasn’t keeping up with payments or squatters, Wright said.

Per the Land Bank’s rules, it cannot immediately sell back a home to a foreclosed owner, but can work out a time in case the person can become one of the Land Bank’s tenants. The second category, tenants, are given first dibs to buy the property at a noncompetitive price before the house is put on the market. And squatters are put in connection with Catholic Charities for relocation services. 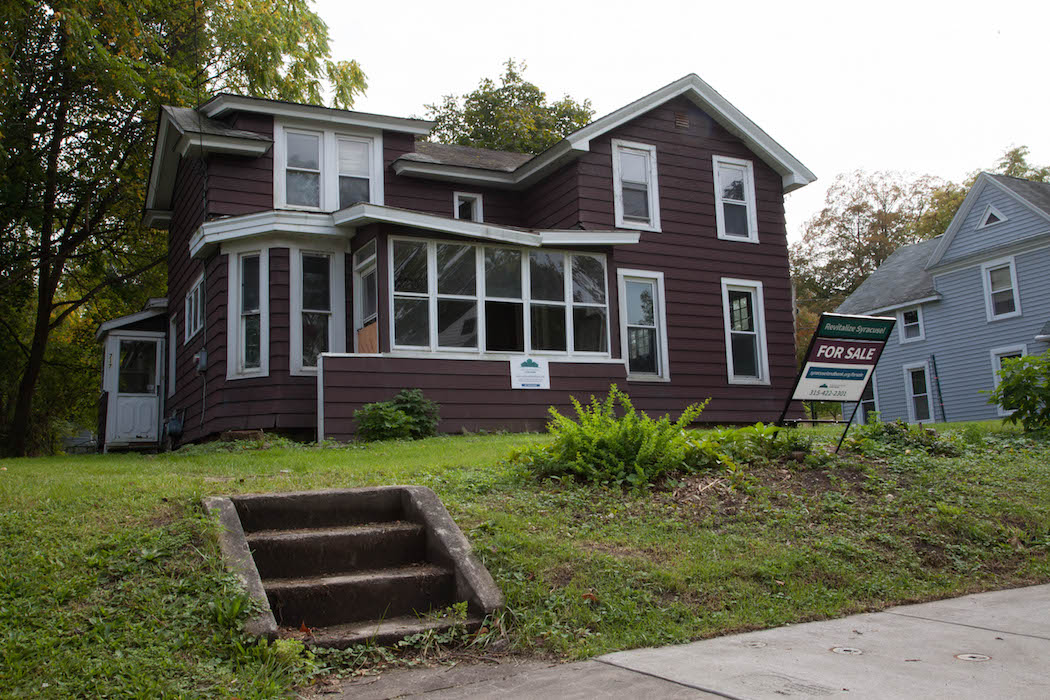 Those are the actions people don’t see, Wright said. They don’t know the lengths the organization goes through so that displacement isn’t an option. The money invested in grass cutting, trash pickup and snow plowing services to keep the properties looking as best it can. Wright is also developing a relationship with local police to deal with trespassing and possible crime in their vacant properties, she said.

“None of those things make a visual impact,” Wright said. “… They don’t see any of these things so they don’t matter to them.”

This year the Land Bank planned to demolish between 50 and 70 houses, but without the city’s usual contribution, the number is expected to fall to about four or five. Only those that pose possible health risks will be taken down. Each demolition costs about $25,000, Wright said.  While the Common Council has suggested to Wright that the Land Bank use its reserve fund for demolitions, she said she needs to protect the organization’s “rainy day fund.”

The money brought in by house sales isn’t enough to cover operating costs, Wright said. That fund is meant to fill in the financial gaps, holding the organization through 2020.

Wright is putting in proposals at the state level and through private organizations, but for hope, she’s looking to Jan. 1 — when at least four new common councilors and a new mayor take their positions.

“We could have a completely new relationship with the city come January,” Wright said. 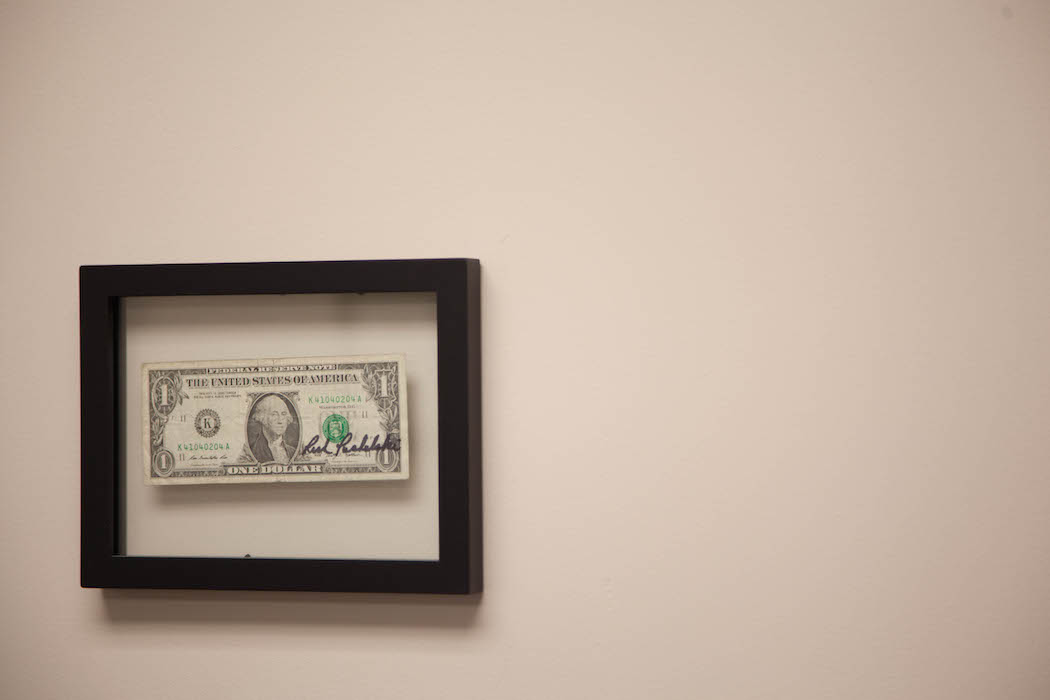 In the meantime, Wright looks to the framed dollar bill above her desk signed by Rich Puchalski — executive director of Syracuse United Neighbors — who, during a tense Common Council meeting, pulled out a dollar declaring, “If you don’t want to fund the Land Bank, we’ll have to do it ourselves.”

Wright continues with that same spirit.

CORRECTION: In a previous version of this post, Rich Puchalski, the executive director of Syracuse United Neighbors, was misnamed. The Daily Orange regrets this error.

The Orange shot 29% from the field and 22% from beyond the arc against the Rams in their Battle 4 Atlantis opener. END_OF_DOCUMENT_TOKEN_TO_BE_REPLACED

The Orange shot 50% from 3-point range but conceded 15 turnovers. END_OF_DOCUMENT_TOKEN_TO_BE_REPLACED

Letter to the Editor