How a local nonprofit is empowering refugees and immigrants in Syracuse

aji Adan grew up in Dadaab, a refugee camp in Kenya, where he remembers his brother falling severely ill. Adan’s father accompanied his brother when he needed to be transferred to a large hospital in Nairobi, the country’s capital — but language barriers prevented him from communicating in Swahili.

His father, who spoke only Somali, barely slept or ate while he was there. Any food he received, he’d give to Adan’s brother. The few instances he slept, it was on the floor.

Ten days later, hospital workers found Adan’s father attempting to throw himself out of the window of the tall building.

It was the only Swahili phrase his father knew: I die.

“He was so hungry, and he was so frustrated about the language and about not being educated that he wanted to kill himself,” said Adan, whose family left Somalia when he was 8 years old.

Hospital workers eventually found a translator who could talk with Adan’s father in his native tongue. The story is one of the reasons education and literacy play a large role in Refugee and Immigrant Self-Empowerment, of which Adan is the executive director.

RISE, formerly known as the Somali Bantu Community Association, works to empower refugees and immigrants who move to Syracuse. Adan is one of six staff members at RISE who are also former refugees. The organization employs nine individuals, including two who joined in the past two weeks.

When Adan was growing up as a refugee, his father gave him a sense of hope that situations would somehow improve. Now, he wants to be the one to provide that hope for others like him.

“My job is to make sure that we have the capacity to help new Americans: refugees and immigrants,” Adan said. “We want them to become functioning members of society, and we can only do that when we give the tools that they need. That’s what we do.”

The organization has found a home at 302 Burt St., just a five-minute walk from Syracuse University campus. On any given day, clients and community members linger at the center, laughing and exchanging stories in their native languages: Somali, Nepali or Maay Maay, to name a few. Children who are not yet old enough to go to school run around or hide behind their parents’ legs. Volunteers teach citizenship or English as a second language classes in the back end of the building.

The RISE case managers are there amid all the activities. They look over a client’s shoulder as he or she fills out job applications online. They accompany clients to doctor’s appointments. They translate all kinds of paperwork and assist clients in filling it out. 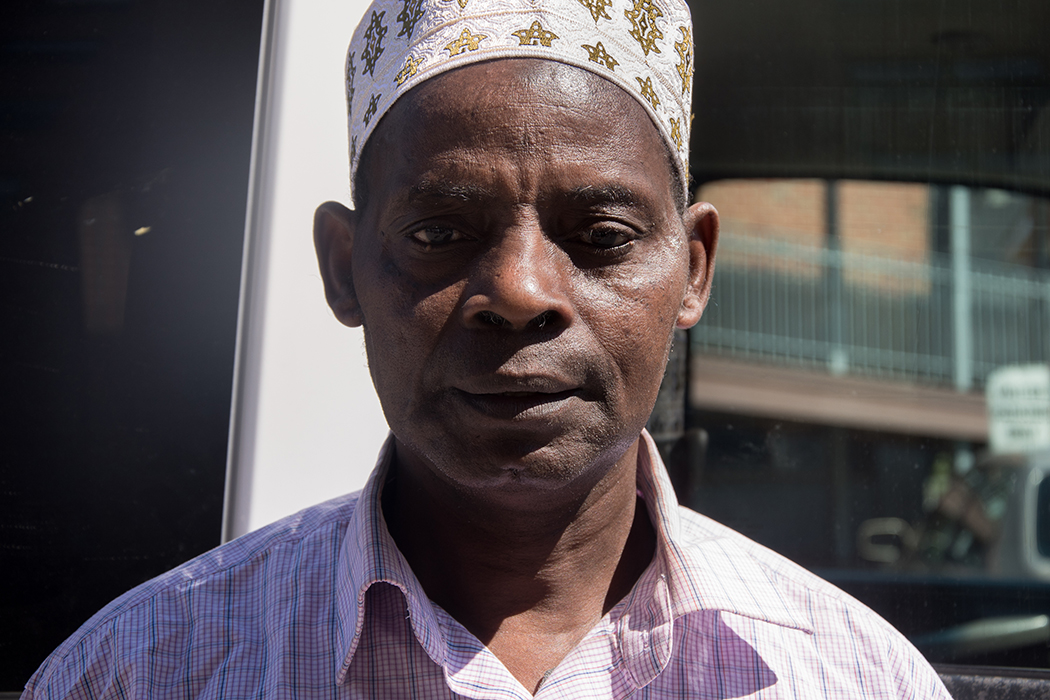 Jahbad Gosar Kerow found a job and learned English because of RISE. He lived in a refugee camp before coming to the U.S. in 2004 Jessica Sheldon | Staff Photographer

All of the services they provide are free.

One of the refugees RISE has helped is Jahbad Gosar Kerow, a refugee from Somalia. Kerow said he remembers the exact date he immigrated to Syracuse: Dec. 27, 2004. On that day, Kerow entered a free country for the first time after living 12 years as a refugee in Kenya in two different camps: Dadaab and Kakuma.

“No job, no food,” Kerow said via translator. “We just stay where we are and don’t move.”

Kerow is one of 300 distinct clients per year whose life has improved because of RISE and the services it provides. He and his wife chose to move to Syracuse because his wife’s family had already resettled in the area.

For Kerow, it was easy to rely on the people at RISE. They weren’t just staff members. They were former refugees who understood and empathized with the hardship of that life.

He placed his full trust in the organization. For five straight months, Kerow took English as a second language classes at RISE on Tuesday and Thursday mornings. Learning English “as an old person” is hard, said Kerow, who is 58.

Upon arriving in Syracuse, Kerow also enlisted Adan’s help to find a job. He sent out application after application. Kerow didn’t care what the job was or what company it’d be for. He just wanted anything to be able to support himself and his wife.

Three months later, RISE helped Kerow secure a job as a cleaner at Janitronics Facility Services — RISE later helped his wife land a job at Wal-Mart — and he’s had it ever since. It’s a job that wouldn’t have been possible in his former life as a refugee, a job he wouldn’t have had without RISE.

RISE was founded in 2004 as the Somali Bantu Community Association. When Adan moved to Syracuse in 2008, he began volunteering and eventually held a number of roles: ESL literacy initiative director, community activities organizer and even office assistant. It didn’t matter how. Adan wanted to contribute what he could for the betterment of the organization.

Refugee and Immigrant Self Empowerment has existed since 2004, but its new name has been implemented for just one year. Here’s a look at some key moments in the organization’s history:

After he was appointed executive director in 2013, Adan decided to build the foundation for a possible name change. Adan saw refugees and immigrants from a wide range of countries walk into RISE and ask for help. As such, he felt that the organization’s name wasn’t inclusive of every community that was benefitting from its services.

But members of the organization didn’t welcome his idea.

“It was a struggle for me, and it was a big fight,” Adan said. “I had to do a lot of one-on-one meetings with a lot of people, trying to explain why my idea makes sense.”

The same year, Adan worked with a group of SU students in the Maxwell School of Citizenship and Public Affairs whose capstone project provided the foundation that eventually changed the organization’s name from the Somali Bantu Community Association to RISE in February 2016.

Adan also began prioritizing diversity for his staff members. Hiring only people of Somali Bantu background wouldn’t reflect well for him or the organization, he said. He analyzes and seeks out individuals who have a good reputation in the refugee community, as well as people whose specific skill sets could benefit the organization.

Khadija Muse, one of RISE’s bridging case managers, is one of two staff members who Adan recruited. She had only been volunteering for a few months before she was hired in October 2016, but the response to her hiring wasn’t initially positive.

Having been born in the Dadaab refugee camp in Kenya, Muse understood the difficult experiences that the organization’s clients have gone through. Slowly, people began accepting her help. Not long after, they started to seek her out.

“The more I helped them, the more the clients trust me,” Muse said.

Muse immigrated to the United States in 2005, settling in Amarillo, Texas, with her family. She lived there for about a decade, doing similar work and helping fellow refugees. She said she feels the responsibility to give back and help out her fellow refugees, an act she displayed even back in Texas.

It’s why, when she first moved to Syracuse in July 2016, Muse was neither happy nor satisfied working a first job at Popeyes.

“I got frustrated. … I used to have a good job, I used to be a part-time student in community college,” she said. “I used to volunteer in the community, clean the mosque and organize events. I used to be everywhere.”

For Muse, finding RISE was a blessing. She is able to give back to the community she is from, and can provide to others the services that her parents weren’t able to receive when they moved to Texas.

It’s been approximately six months since she started working at RISE, but clients have given her their ultimate trust. She always picks up her phone for clients. She offers advice to young girls and other women. She makes herself available for anyone who needs her.

“When you’re a refugee, the first time you come here, you need to see people of your own that would help you and will be there for you,” Muse said. “If you don’t have that, you’re lost.

“When they come here, they find their place.”