The concept behind Truth Speaker's song "Young Starz" was to tell part of his family history, specifically his relationship with his dad who was in incarcerated for two years of the rapper's childhood.

Leaving the Onondaga County Justice Center visitors area, three-year-old Makhai looks up at his dad walking next to him, on the other side of a thick layer of glass.

At the end of the hallway are doors that open in opposite directions. To the right is the life the pair knew before Freedom-Allah:Bey was incarcerated on a weapons charge from a street altercation. To the left were prison cells. Makhai Bailey thought they were finally going home together.

“I could hear his screams and fighting when he realized I wasn’t getting out,” Freedom-Allah said.

Freedom-Allah was incarcerated after a street altercation over an attempted drug theft in which he and his cousin were pitted against a group of about 20 men. The uneven match meant weapons were soon involved and the cops were called, Freedom-Allah said. Three days after Freedom-Allah was charged, Makhai’s mother was caught traveling from New York City to Syracuse with 400 pounds of marijuana. Now she was facing a federal case while unknowingly pregnant.

“He was almost like Tupac, born behind bars,” Freedom-Allah said.

Makhai’s parents were both facing possible sentences of about 10 years. When their son was born while his mother was out on bail, Freedom-Allah made the decision to run away from the United States Marshals Service because he didn’t know if he was going to be gone forever.

Despite officials looking for him in multiple states and fliers promising reward money for information on his whereabouts, Freedom-Allah promised not to get caught until Makhai’s mother got probation. If one of them got into any more trouble, their son would be lost to the foster care system.

Freedom-Allah was on the run with Makhai for two years. With his mother facing 10 years, Freedom-Allah took on the responsibilities of two parents. Freedom-Allah remembers the little moments: the baths, the playtimes and the pictures taken of every “first” moment no matter how small. He remembers how he looked at his son when Makhai saw a bee land on a sunflower for the first time, reacting to the world around him.

Their time in limbo didn’t last forever. Freedom-Allah was caught in 2002. That’s when he made a promise to Makhai. He told him he had to go away for a while, but he would be back with a plan for both of them.

Fifteen years later, Makhai, who goes by his stage name Truth Speaker, is a 17-year-old rapper based out of Syracuse incorporated this history as the basis of his song “Young Starz.” To date, Makhai has released three albums, written more than 40 songs and become a regular performer at the United Nations with his lyrics that speak to children’s rights, non-violence and current events. He and his production team recently finished mixing his latest single “Hip-Hop Baby,” which is projected to be released this summer.

“Young Starz” hit Freedom-Allah in the gut when it was released in August 2016. He was impressed by the lyricism, but what made Freedom-Allah cry was a particular verse:

“I know about this ‘cuz my pop’s got gone. Right before he left said, ‘Son stand strong, I’ll be right back, won’t be too long. Hard to understand ‘lil man I did wrong, I got a couple bands for you to stand on, plus I got big plans for when I come home.’”

The two are living the plan he promised, Freedom-Allah said with a tear dropping down his cheek. This was his first time reflecting on the reality in detail out loud.

Makhai is following in his father’s footsteps as a fellow “hip-hop head” and together they are making their contribution to the future of the industry and the message that comes out of it. The two are co-founders and co-owners of Freeborn Music Productions, an independent music production company working with young artists to create music with a positive message.

Freedom-Allah is quick to add that he is not Makhai’s manager, which is what most people assume. He doesn’t want to manage his son, who is signed with the label.

“It just so happens that we work well together and like spending time with each other in that capacity,” Freedom-Allah said.

“That’s not what it sounded like at home,” he’ll say. Or, “You’re not giving it your all. Give it to me one more time.”

When Makhai hears silence he knows he has it.

“Silence means there’s nothing else left for me to say, it means he’s got it,” Freedom-Allah said.

It’s beautiful to watch how they connect and vibe off of each other in the studio said Michael “Uncle Mike,” Lobdell, Freedom-Allah’s older cousin. Makhai has the same sense and the same brain as his father, Lobdell added. 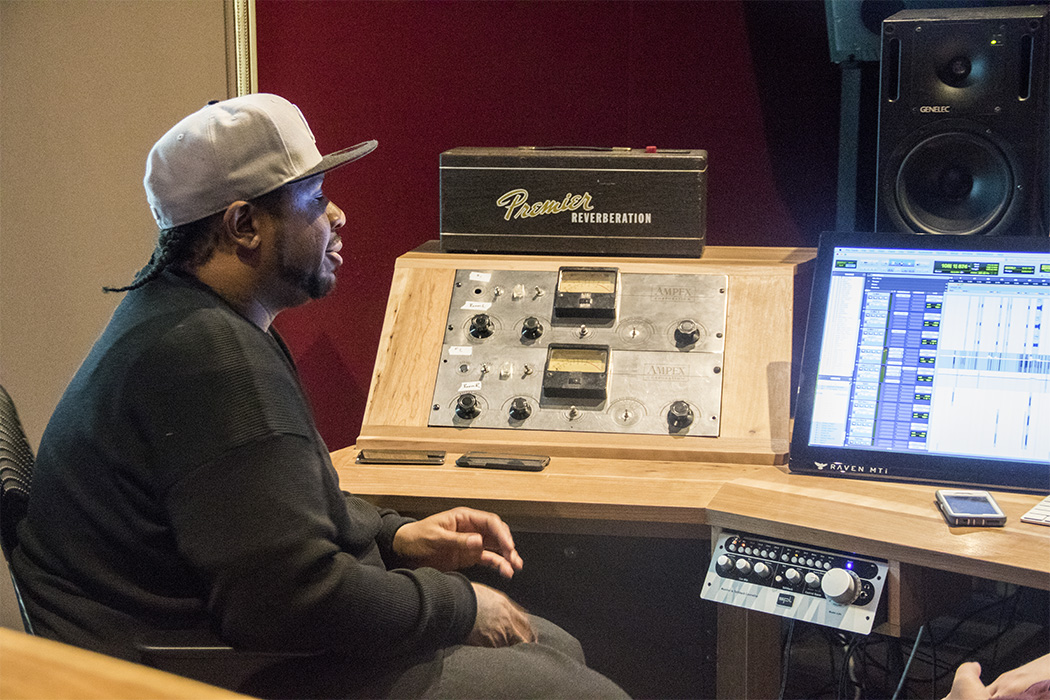 Freedom-Allah has kept Makhai on a steady path toward greatness in the studio and at school because he won’t allow negative influences to take his son the way they took him.

Academic success is just as important for Freedom-Allah, and Makhai has delivered. He is consistently on the honor roll and was selected a few weeks ago for an award honoring future scientists and technologists.

During his freshman year of high school, Makhai got into an altercation with a classmate because of Makhai’s success in school. Freedom-Allah went to Henninger High School to figure out what happened and came into contact with Principal Robert DiFlorio for the first time.

“I was mad as hell,” Freedom-Allah said, who was determined not to have his son’s freshman year start off negatively based on the fact that he was getting good grades. He didn’t want DiFlorio to perceive Makhai as a troublemaker.

“I’m the principal of the largest urban high school in the city, and I don’t see a lot of fathers, but I do see this guy,” DiFlorio said. “The first time it was very adversarial, but what I recognized was concern. Here’s a parent who’s really concerned about his son.”

Now, Freedom-Allah walks through Henninger High School with confidence. Security guards, teachers and students greet him by name. All he has to do to speak with DiFlorio is walk into the main office, give him a wave to acknowledge his presence and soon enough the principal is with him, greeting him with a brotherly hug.

Unlike his son, Freedom-Allah wasn’t raised with father to nurture that confidence. He knew who he was, but his father had gotten in trouble and left the state, and his son, behind.

“When I was grown I had to tell him, ‘I learned how to be a father from your absence. I’m not mad, I feel that was a life lesson,’” Freedom-Allah said, who now makes a point to tell his son he loves him every night and to spend quality time together on Sundays.

One more strike on Freedom-Allah’s record and he’s out, like his father’s absence. But he said he doesn’t have to worry about getting that third strike.

Freedom-Allah will continue to be a father figure for Mahkai and other kids in the community.

“I want these other kids to see that it’s possible,” Freedom-Allah said.

The Orange shot 29% from the field and 22% from beyond the arc against the Rams in their Battle 4 Atlantis opener. END_OF_DOCUMENT_TOKEN_TO_BE_REPLACED

The Orange shot 50% from 3-point range but conceded 15 turnovers. END_OF_DOCUMENT_TOKEN_TO_BE_REPLACED

Board of Trustees creates diversity and inclusion advisory committee