Despite rich history, Syracuse baseball is unlikely in near future

Syracuse's baseball program began in 1873 and rose to national prominence by 1917. The Orangemen advanced all the way to the 1961 College World Series, but the program was cut 11 years later due to changes in the academic calendar and a university recession.

Syracuse’s first intercollegiate sport ended as quickly as it began. Established three years after the university itself, the baseball team started as a dozen students playing local rivals on the weekends. But then, in 1972, without notifying anyone, an assistant athletic director sold all of the baseball equipment and uniforms.

Only 11 years removed from a third-place finish in the College World Series, some players struggled to understand why. The members of a freshman- and sophomore-laden squad took the call hard. But a university recession and change in the Syracuse academic calendar led to baseball’s demise.

Last weekend, 14 Atlantic Coast Conference baseball teams began the 2017 season. More than five years since announcing a switch to the ACC, Syracuse remains the only school in the conference — and only one of four Power 5 schools — without a baseball program. Syracuse will not field a squad for the 45th straight year.

Syracuse last had an NCAA baseball team in 1972, when Jim Boeheim served as an assistant to the men’s basketball team and Richard Nixon sat in the White House. Despite Syracuse’s rich baseball history, despite the ACC’s dominance on the diamond, despite the SU Athletics’ surplus revenue, SU’s baseball dormancy endures. At least for the short term.

In the meantime, Syracuse stays focused on upgrading its football program, first-year Director of Athletics John Wildhack said last week. Only when football reaches national relevancy will Syracuse even begin to consider the feasibility of adding sports, baseball included.

“Let’s take our existing sports and get them to their full potential,” Wildhack said. “Is there anything we’re considering now? No. Might there be the opportunity down the road? Yes.”

When Syracuse joined the ACC four years ago, the conference said it didn’t pressure the school to add baseball, even though it includes perennial powers Clemson, North Carolina and Miami. The ACC requires schools only have football, men’s and women’s basketball, and women’s soccer or volleyball. SU fields the minimum number of varsity sports (16) required by the NCAA, which said it hasn’t asked Syracuse to join its ACC counterparts on the diamond.

Attempts by third parties to revive the baseball program at Syracuse haven’t succeeded. Former Director of Athletics Daryl Gross, who ended men’s and women’s swimming and added women’s ice hockey, hosted baseball advocates in his office, but he stepped down in 2015 following an NCAA violations report. Gross also explored adding men’s ice hockey, but similar obstacles arose. Money and Title IX, which requires institutions to provide equal scholarships for men and women, curtailed those efforts. If Syracuse added baseball today, it would need to eliminate a men’s sport or add one or two women’s sports.

“If I’m a fan, I can say, ‘Why can’t SU just add baseball?’” said Rick Burton, Syracuse’s faculty athletic representative to the NCAA and a sport management professor in the David B. Falk College of Sport and Human Dynamics. “What you have to understand is football or men’s basketball would have to pay for it.”

Ten years ago, a group of about 20 families, business people and doctors figured it could raise $200,000 to raise a team. That estimate woefully shorted the actual annual cost of fielding a competitive baseball team in one of the country’s top conferences. In 2014-15, the average operating expenses of an ACC baseball program on game day hovered around $600,000, according to the U.S. Department of Education. Tack on the cost of awarding scholarships and paying coaches and support staff, and the real figure sits around $1 million, making baseball among the most expensive non-revenue sports in college athletics.

“You want baseball at Syracuse?” said Andy Doyle, a Winthrop University professor of the history of sports. “Put up some cash.”

Vermont Director of Athletics Jeff Schulman said the 2008 recession hit UVM’s athletic department particularly hard and left administrators no other choice but to cut sports. Nationwide, athletic departments grapple with expense hikes as costs for support staff, travel and scholarships continue to rise. For most schools, financing, not Title IX, has been the largest issue.

“It’s unfortunate,” Schulman said, “but baseball was a real burden.”

For Syracuse, any potential venue also remains unclear. The Orange possibly would practice and host games at NBT Bank Stadium, the home of the Class AAA affiliate of the Washington Nationals less than 4 miles from campus. The other option, building a South Campus stadium, projects a cost in the millions.

Even still, it’s unlikely that Syracuse would get onto the field before April. SU routinely ranks as the snowiest campus in the U.S., meaning the Orange would spend extra money flying down South for the first half of the season. Yet that doesn’t mean it can’t be done. Vermont supported a D-I team for years, Maine boasts a competitive team in a comparable climate and Boston College holds its own in the ACC.

Snuffing out Syracuse’s historic past mystified some locals at how a program so storied could end so quickly. Baseball began at Syracuse in 1873 and took flight when Lew Carr took over as head coach in 1910. Carr gained fame when he played third base for the Pittsburgh Pirates alongside all-time great Honus Wagner. Until 1900, Syracuse’s travel and opposition were limited to New York state. At the turn of the century, SU began touring the East for spring games. By 1917, Syracuse had ranked fourth nationally.

“When there is taken into consideration how little time for practice there was,” read a Syracusan article, “how indefinitely small the intent taken in the game by the students, and that the sum of money given by the barest necessity of a college nine, we may well admire their pluck and perseverance.”

Most early teams played indoors at a local armory and, on nice days, they took to the Quad. In 1942, Syracuse suspended baseball due to World War II. The sport returned to campus six years later under the direction of Ted Kleinhans, who had been a teammate of Joe DiMaggio on the 1936 World Series Champion New York Yankees. In 1961, SU baseball advanced to the College World Series in Omaha, Nebraska, and several players had also starred on the 1959 Syracuse football team that finished 11-0 and won the national title. 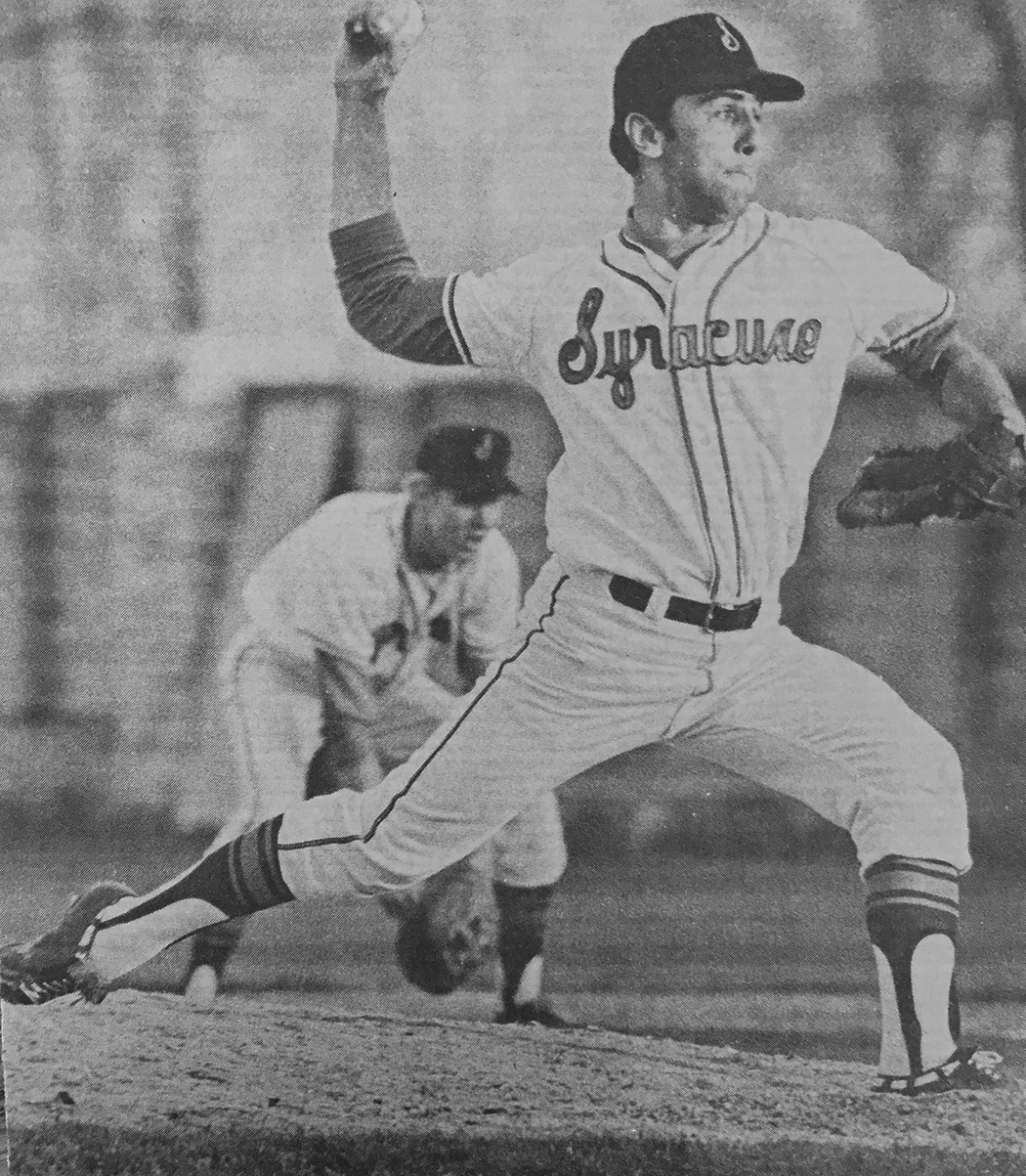 While top-ranked teams played in warmer climates, Syracuse prepared for upcoming seasons in “The Barn,” a building adjacent to Manley Field House that held batting cages, mounds and one big space heater. Others teams played upward of 50 games per year, and SU was lucky to get in 20. From 1910 to 1942, the team played games on the land behind Manley Field House that now serves as the lacrosse practice fields. In Syracuse’s prime, more than 1,000 fans attended.

Crowds shrunk as the Syracuse basketball program grew. As few as 20 fans attended games in the late 1960s and 1970s. Then the economy nosedived. Mass inflation nationwide ensued, budget cuts loomed and, according to minutes from 1972 Athletic Policy Board meetings, a recession bowed the university.

“It was extremely difficult,” Syracuse class of 1960 outfielder and MLB outfielder Doug Clemens said. “We’d be working out in a barn in sweats and a hooded jacket, then we’d go out and run the show. It was really brutal because in my era we didn’t even have the Field House yet, let alone a great big dome.”

Officially, baseball was temporarily suspended, not discontinued, in 1972 after the university revised its academic calendar to end in late April rather than late May or early June. A substantial number of baseball playing dates became casualties to the change, and the university faced extra costs to fund a baseball team playing weeks, if not months, after a semester’s end.

Two springs later, members of the Athletic Policy Board at SU voted not to recommend the reinstatement of baseball. Dr. Theodore C. Denise, then-Chairman of the Athletic Board, cited forecasted operating costs and the “present level of interest in intercollegiate baseball.”

“Everyone in the area might benefit,” Paul said. “It could really just raise the whole quality of baseball in the state. It would be great for so many reasons. But it’s a long shot.”

Either way, baseball’s return appears distant due to finances and Title IX.

“The expenses of athletic programs are really skyrocketing,” said Karl Green, a baseball historian. “I would say baseball is highly unlikely at Syracuse. But never say never.”

The Orange shot 50% from 3-point range but conceded 15 turnovers. END_OF_DOCUMENT_TOKEN_TO_BE_REPLACED

John A. Lally, a former Syracuse lineman, and his wife donated $25 million to begin the transformation of Manley Field House END_OF_DOCUMENT_TOKEN_TO_BE_REPLACED