Behind in the polls, SU alumna Colleen Deacon fights as an underdog in swing district Onondaga County

Colleen Deacon, a single mother, said her past experiences give her an understanding her opponent doesn't have. After graduating from Syracuse University she was faced with student loans, had to apply for food stamps and Medicaid.

Colleen Deacon has made listening to the people of her district the top priority in her campaign.

Deacon, the Democratic candidate, is running against incumbent candidate John Katko (R-N.Y.) for the congressional seat of New York’s 24th District. The election is Nov. 8.

“Our biggest focus is to get my message out to as many people as we can,” Deacon said. “We are going to consistently let our voters know that I am listening.”

Deacon said she has made it a point to get to every corner of the district to talk to the people and hear their concerns. The 24th Congressional District covers all of Onondaga, Cayuga and Wayne counties, and the western half of Oswego County.

A recent poll had Deacon behind her opponent by 19 points, but that has not discouraged her in this election.

While the numbers are not in Deacon’s favor, she is running in one of the few remaining swing districts in the country, said Christopher Faricy, a Syracuse University political science professor.

Faricy said the district has switched back and forth between Democrat and Republican hands over the past few election cycles. While this election may not shift the power in the United States House of Representatives, it can be an indication of the direction the country is going, he said.

Having a perspective that isn’t really represented in Congress really gives me the ability to be a voice that hasn’t been there before.

The winner of the district will be determined by the party’s ability at the federal level to mobilize voters, Faricy said. If the Hillary Clinton presidential campaign can get their voters to the polls, it would help Deacon, he said.

Last week, U.S. President Barack Obama endorsed Deacon for the House of Representatives in a down-ballot push for Democrats in Congress. The president said Deacon was a “tough and smart leader,” in the release.

To win the seat, Deacon said her campaign is working hard to talk to as many constituents as they can.

“My campaign is about people,” she said. “It’s about inclusive, not exclusive.”

On the campaign trail, Deacon talks about her difficult past and her understanding of those who have or are going through hard times.

Deacon graduated from SU with a degree in English. Some of her favorite memories, she said, were going to sports games and hanging out with her friends.

RELATED: Candidates on the issues; 3 takeaways from Congressional debate between Colleen Deacon, John Katko in Syracuse

After graduation, Deacon recalled she was met with difficult times. In addition to dealing with her student loans, she had to apply for food stamps and Medicaid. Deacon is also a single mother to her 13-year-old son. The candidate said she believes these experiences have given her an understanding her opponent does not have.

“Having a perspective that isn’t really represented in Congress really gives me the ability to be a voice that hasn’t been there before,” she said.

Sharon View, a friend of Deacon’s, has known her since she was a child. View, who has also worked on Deacon’s campaign, said her understanding of struggling is something that sets her apart from her opponent even if it is a different type of struggling.

The female perspective, View said, is one that is needed in Congress. She said the different perspective would be good for Washington.

“She’s a real fighter,” View said. “She stands up for the things she believes in.”

I want to make sure that students have the ability to go to school without having to worry.

Deacon has been open about her struggles, including paying off her student debt just last year. Because of it, she has made the decreasing of the federal student loan rate a priority.

“I want to make sure that students have the ability to go to school without having to worry,” Deacon said.

She said she would work to lower the interest rates on student loans and allow for loans to be consolidated.

The candidate has previously worked for current U.S. Senator Kirsten Gillibrand (D-N.Y.) for six years. Deacon said while she was working for the senator, she was the eyes and ears for her.

“I know what our challenges are. I know what our issues are,” she said. “But I also know the potential that we have here and I truly want to make a difference for this district.”

Deacon said she believes the difference starts with getting people to vote — particularly young voters.

She said younger people bring fresh ideas and should be more involved in the process and engaged with what is happening around them. She said people should get out, vote and make their voices heard. 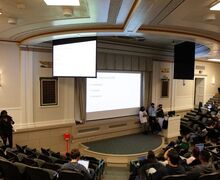 Ahead of Steve-O’s stand-up comedy show at the Westcott Theater next Wednesday, he spoke with The Daily Orange about his experiences with stand-up and the upcoming show. END_OF_DOCUMENT_TOKEN_TO_BE_REPLACED