Syracuse University was the first private university to support the "Enough is Enough" sexual assault prevention legislation. All public colleges and universities in New York state are required to adopt it.

The issue of sexual assault has become a lightning rod on college campuses across the country.

High-profile cases at Columbia University and Stanford University have forced both students and universities to grapple with questions about sexual assault, consent and what can be done to reduce the alarming statistic that one in five women enrolled at a four-year college will be sexually assaulted.

Here’s a primer on how Syracuse University is dealing with sexual assault.

What resources are available for survivors of sexual assault at SU?

The Sexual and Relationship Violence Response Team is a relatively new unit within the Counseling Center that deals specifically with issues of sexual assault. It was created after the closing of the Advocacy Center in 2014. 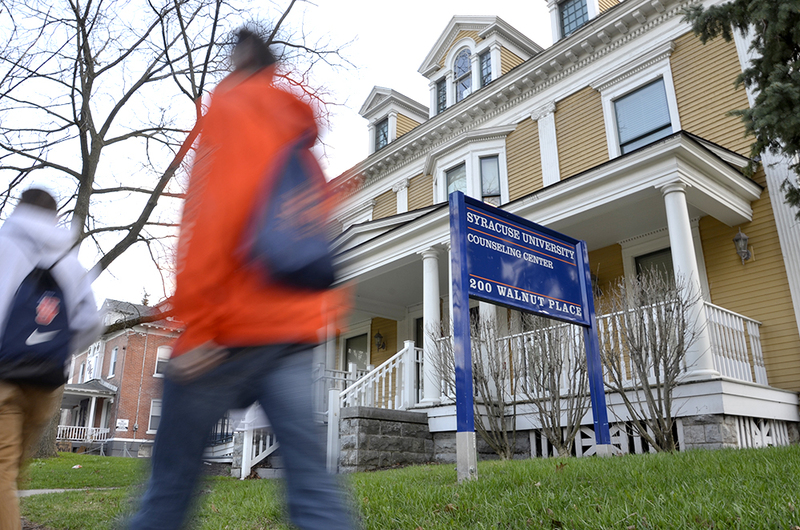 Where and how can you report sexual assaults?

Students can report an assault to the university or to the Syracuse Police Department. If a student goes to the Department of Public Safety, SU’s campus police, DPS is obligated to report the incident to SPD, although the student is under no obligation to file a report with SPD.

Students can also file a Title IX complaint at the Office of Equal Opportunity, Inclusion and Resolution Services, which is led by SU’s Title IX coordinator. The complaint is a formal document asking the United States Department of Education’s Office for Civil Rights to investigate a sexual assault claim and how the university handled it.

Title IX is a law that was passed in 1972 to bar gender discrimination in educational programs or activities. It prohibits any institution receiving federal funding to discriminate on the basis of sex. In recent years, however, it has been used as a tool by survivors of sexual assault. 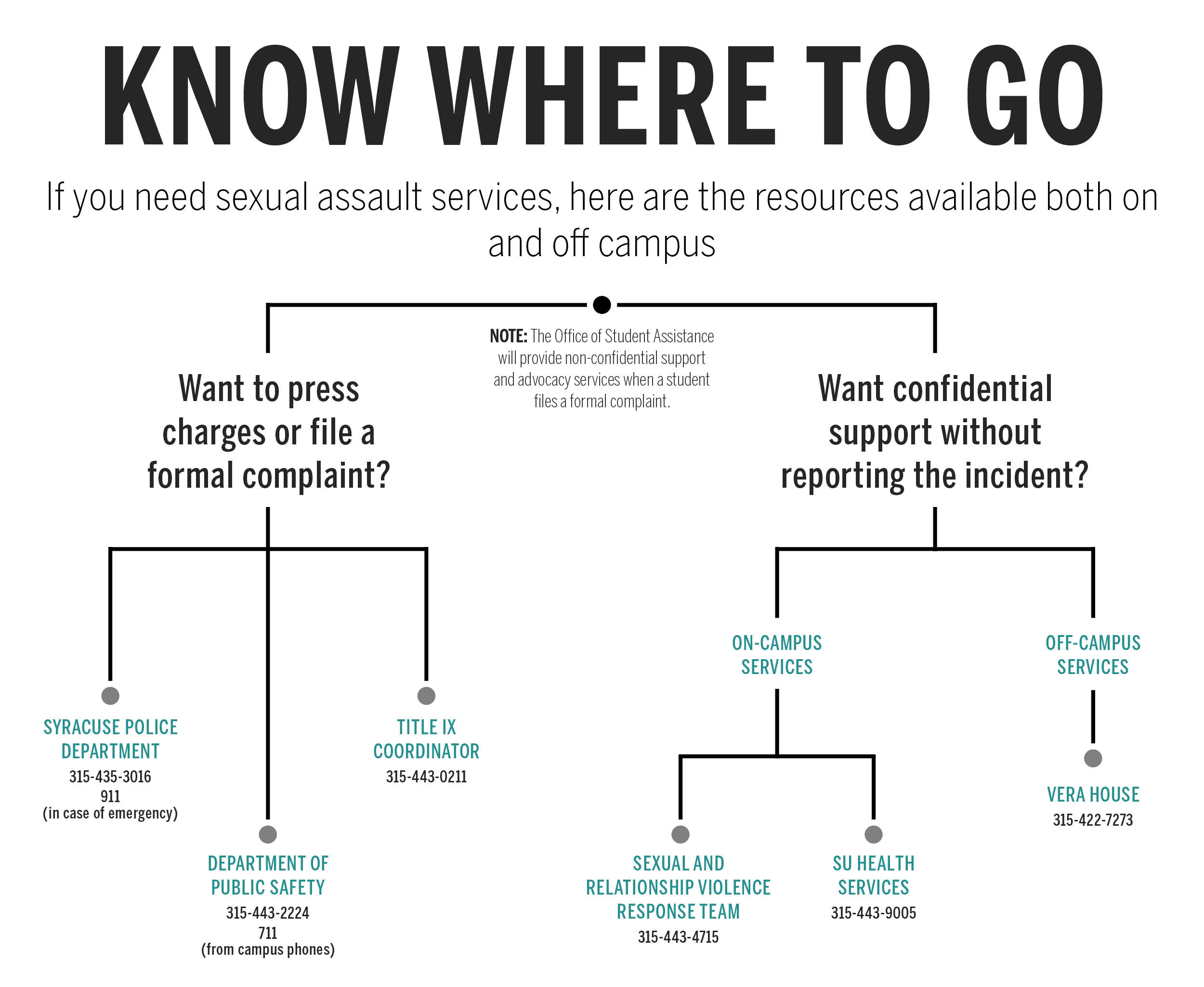 What happened to the Advocacy Center?

The Advocacy Center was shut down in 2014 shortly after Kent Syverud became chancellor. The move spurred widespread anger across the campus community and drew the attention of national media.

Although the university said the decision to close the Advocacy Center restructured sexual assault resources and didn’t decrease them, the lack of transparency about the decision was a major factor in THE General Body’s sit-in during the fall of 2014.

New York state passed a sweeping sexual assault bill called “Enough is Enough” in 2015, which had a major impact on how SU deals with sexual assault.

The law adopted affirmative consent, or what activists call “Yes Means Yes.” In the law, the exact definition of consent is “a knowing, voluntary, and mutual decision among all participants to engage in sexual activity.”

New York is one of four states that have legally adopted affirmative consent, the others being California, Connecticut and Illinois.

Other requirements in the law include amnesty for alcohol and drugs at sexual assault resource centers, a survivor Bill of Rights and mandatory training for students, faculty and staff.

Syverud was the first private college president or chancellor to support “Enough is Enough” in New York state. 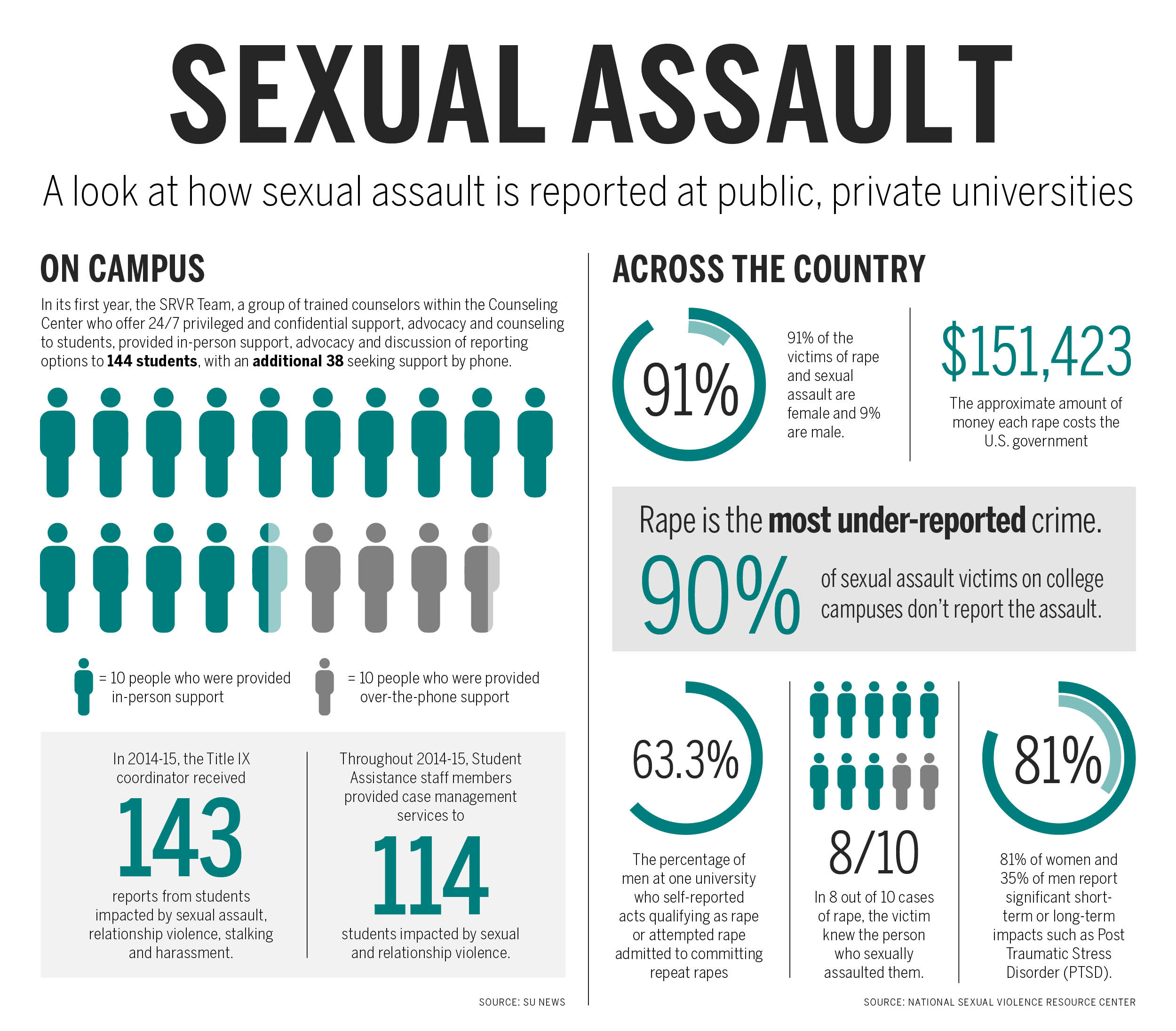 SU is under investigation by the U.S. Department of Education for its treatment of a sexual assault case, after a former student filed a Title IX complaint to the Office for Civil Rights.

After reporting an assault on or about May 5, 2015, the former student’s complaint said SU failed to “respond promptly or equitably” to the report. The student’s identity was redacted from documents provided to The Daily Orange.

The investigation sparked a conversation about SU’s transparency when it comes to sexual assault.

The university failed to inform the Chancellor’s Task Force on Sexual and Relationship Violence of the investigation. University community members shared concerns of the university’s lack of communication on sexual and relationship in January at an OCR meeting.

Here are the numbers on sexual assault at SU:

Although there is no federal legal requirement to conduct the survey, the “Enough is Enough” law requires all colleges and universities in New York to do so.

The majority of respondents did not report any unwanted sexual experiences, according to the survey results.

It is unclear when the university will release the results of the next campus climate survey. Sexual assault at SU will be reassessed every two years, according to the university.

The low Clery Act numbers are not unique to SU. According to the American Association of University Women, 91 percent of colleges reported zero sexual assaults in 2014.

The Daily Orange will continue to update this Explainer as new information about the sexual assault culture at Syracuse University is released.

Video: A guide to COVID-19 vaccines in Syracuse

Video: The D.O. Explains: 5 stories you missed over break

Video: The D.O. explains the news you missed over break

The Orange shot 50% from 3-point range but conceded 15 turnovers. END_OF_DOCUMENT_TOKEN_TO_BE_REPLACED

John A. Lally, a former Syracuse lineman, and his wife donated $25 million to begin the transformation of Manley Field House END_OF_DOCUMENT_TOKEN_TO_BE_REPLACED