Explore the SU campus through these 6 historic statues

There are more then 20 sculptures sprinkled across the Syracuse University campus. Some are quite old, while others are relatively new.

Sculptures are scattered across the Syracuse University campus — around the Quad, in courtyards and in academic buildings.

The history of these pieces are documented on plaques next to each sculpture, said Domenic Iacono, director of SU Art Galleries.

QR codes on the plaques provide further information about the sculptures and grant access to a map that shows where you are on campus and where to find other artwork.

Here are a few of the sculptures located around the SU campus: 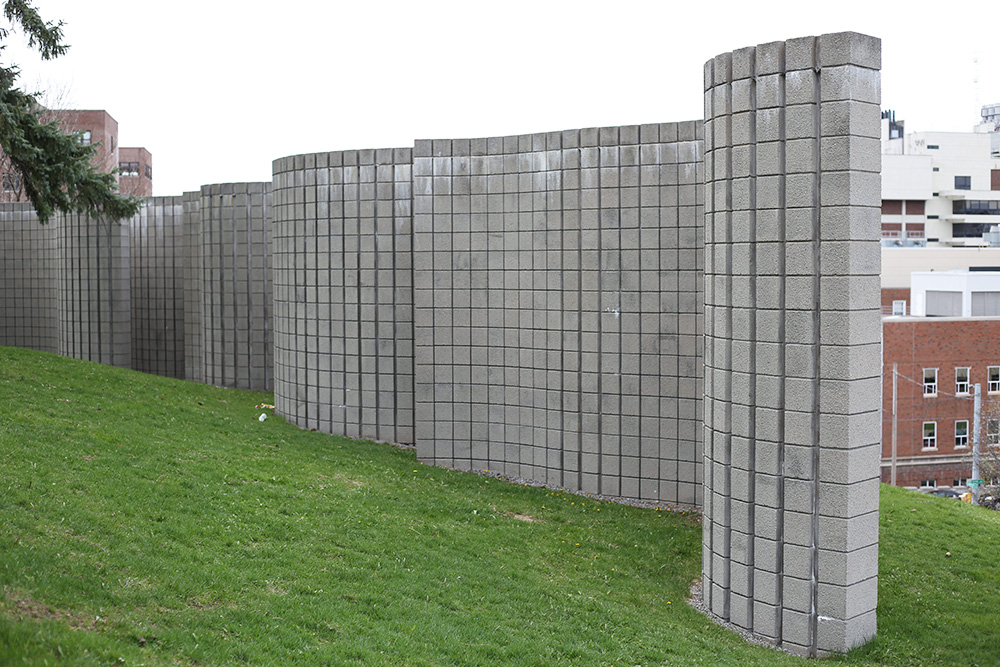 In 2004, three years prior to his death, sculptor Sol LeWitt completed “Six Curved Walls,” a sculpture designed as part of the “Exploring the Soul of Syracuse” initiative announced at former Chancellor Nancy Cantor’s inauguration.

The SU alumnus built these six, 12-foot high walls to represent the breaking down of barriers between the university and the surrounding community. This is one reason why this sculpture is the favorite of Jonathan English, an assistant professor in the Setnor School of Music.

“I’ve seen kids playing down there and students playing down there,” he said. “I’ve heard some people say that’s where they kissed their boyfriend or girlfriend for the first time. And that’s exactly, I think, what this artist wanted.” 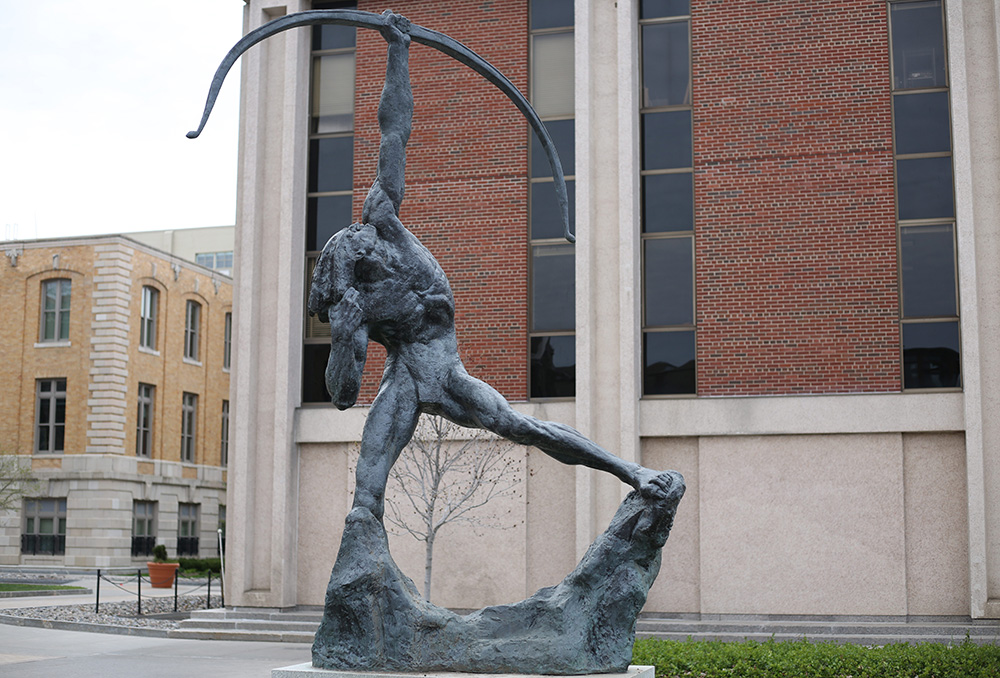 Before there was Otto the Orange, SU sported a variety of mascots, including a goat named Vita and a Roman-style gladiator. One of these mascots was the Saltine Warrior, a fictional Native American chief whose remains, according to legend, were found near Steele Hall.

This mascot stayed with SU from the early 1930s to the late 1970s. In 1951, the senior class funded a statue of the warrior. The students of the renowned late sculptor and SU professor Ivan Mestrovic competed for the opportunity to design and create the sculpture. The winner was Luise Clayborn Kaish.

While the Saltine Warrior was retired in 1978 following protests by Native American students, the statue remains in front of Carnegie Library.

English said he sees this sculpture as a positive representation of the school’s progressive decision to remove Native American imagery from the sports teams.

“Not only do I think it is an amazing sculpture and an amazing piece of art,” he said. “It is something we can be so proud of at Syracuse University, in that I think we were the first institution that literally retired using a Native American image as a mascot because so many people found it demeaning.” 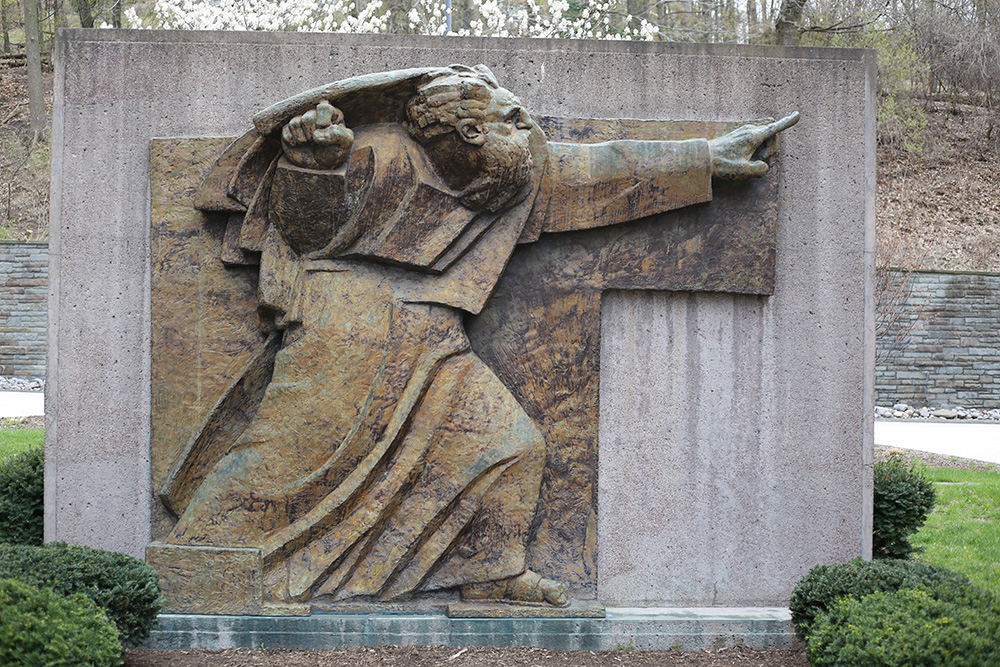 The Mestrovic Sculpture Court, located between Shaffer Art Building and Bowne Hall, is home to three sculptures by Mestrovic, the Croatian artist who became an SU professor in the 1940s.

One of these sculptures, titled “Moses,” was originally intended to be the centerpiece in a New York City memorial for Holocaust victims in the early 1950s. The memorial was never installed due to monetary reasons and conflicts with the city’s park commissioner.

Mestrovic was married to a Jewish woman during World War II, and some of her family members were killed in the Holocaust, Iacono said, while Mestrovic was detained and jailed by Italian fascists for his work.

According to university archives, former Chancellor William Tolley was informed that Mestrovic was “ill and unhappy” in 1946. Tolley then offered Mestrovic a job teaching sculpture at SU, a position Mestrovic held from 1947 to 1955. 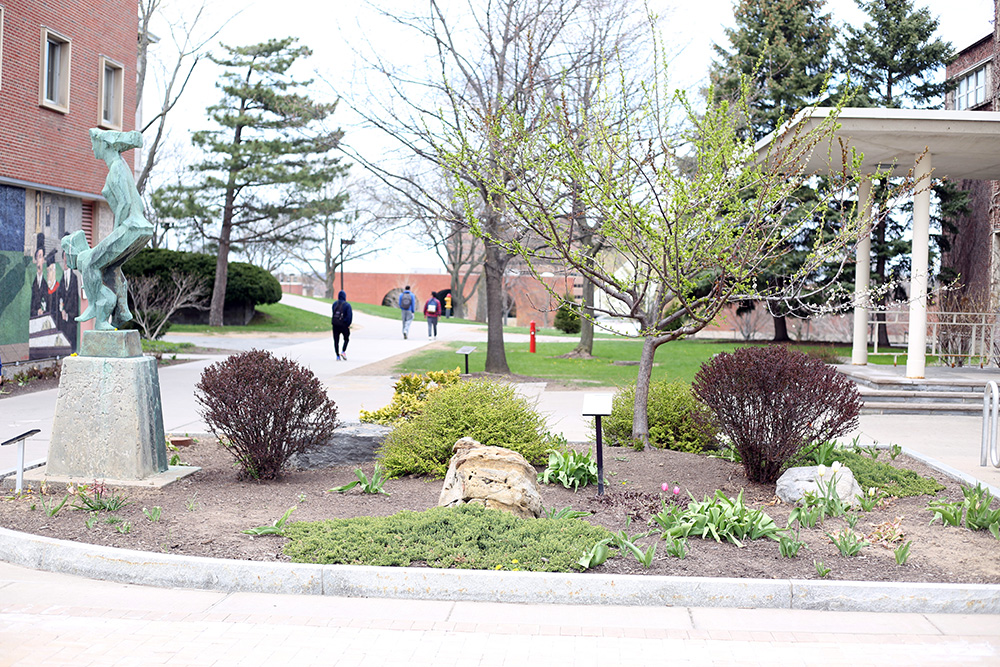 Sam Van Aken, an associate professor in the College of Visual and Performing Arts, is a sculptor, but his medium is not bronze or stone — it’s fruit. Aken, through a process called “chip-grafting,” created a tree that bears 40 different fruits at the same time.

The tree, which is located on the Quad, received media attention from national outlets like BuzzFeed and National Geographic.

English said the tree is not only an impressive piece of art but also an analogy for SU and its students. He sees the base as the united aspects of the university and the branches as a representation of the diverse departments, faculty and students at the school.

“Aren’t we all individuals being grafted on to the same tree?” he said. “Don’t we all bear different fruit? If we’re Muslim, if we’re Christian, if we’re atheist, if we’re straight or we’re gay or we’re fat or we’re skinny? Good lord. That is, to me, the epitome of what a university should stand for.” 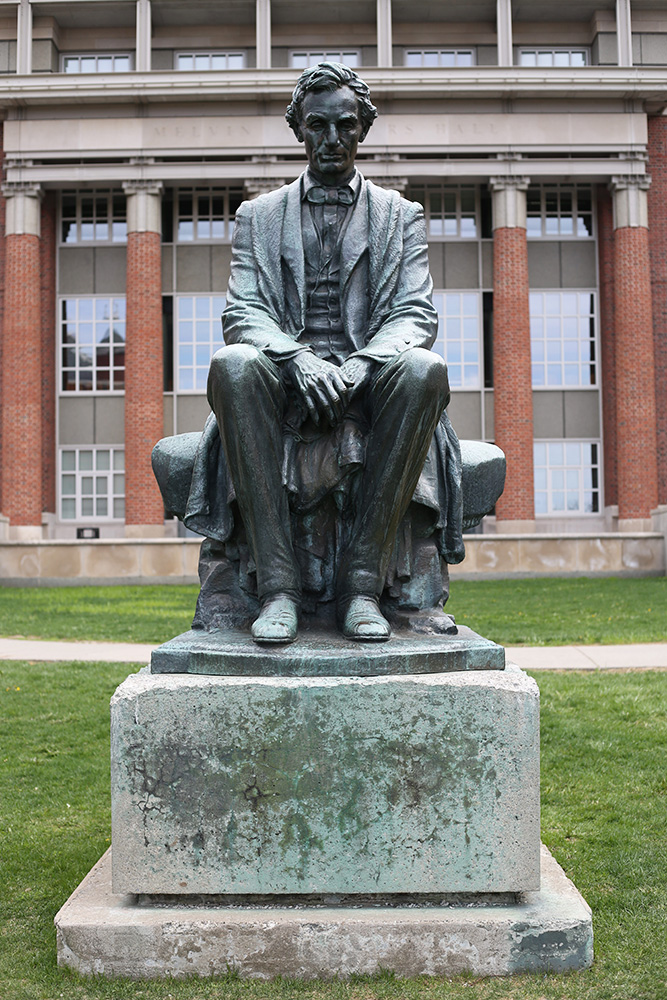 Between Maxwell, Eggers and Tolley halls sits a statue of former President Abraham Lincoln. The sculpture, created by James Earle Fraser, is not the original but a full-size bronze cast. The original statue is located in Jersey City, at the established eastern terminus of the Lincoln Highway, the first coast-to-coast highway in the United States.

Martin Bush, a former instructor in Maxwell’s history department, purchased the entirety of Frasier’s collection for SU following his death, according to an article on the Maxwell School’s website. The recast statue was instilled in 1968.

“He is a little younger, he’s beardless, yet (Fraser) portrays him where you can see the weight of the world is on his shoulders, for what’s going to happen,” Iacono said.

Within the next few months, the Lincoln statue will be undergoing renovations and receiving a new pedestal. The original pedestal, Iacono said, was made of concrete and has not weathered well. The new base, however, will be made of granite. 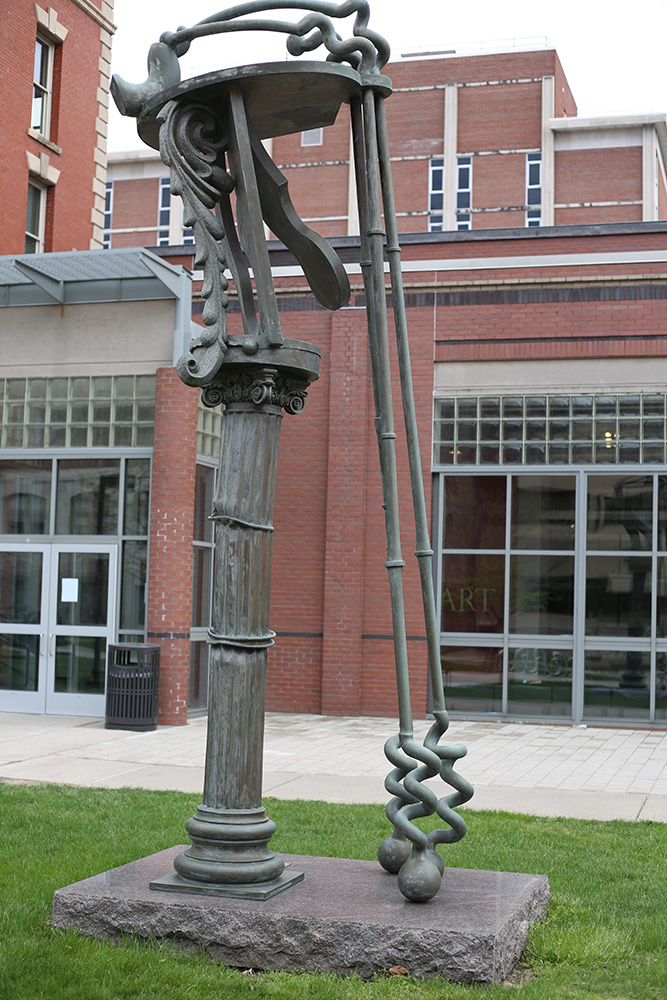 Oracle’s Tears, located outside the Shaffer Art Building, was built by Rodger Mack in 1999. Mack spent 34 years at SU, first as a sculpture professor and later as the first director of the School of Art and Design in VPA. He helped to establish this program, which was split into separate schools of art and design in 2015.

Stephen Zaima, associate dean of global studies in VPA, said this specific sculpture is a “result of the expertise we have on this campus,” as well as a sample of modernist, outdoor sculpture with a touch of surrealism.

“There’s a certain kind of whimsical nature in that work,” Zaima said. “(Mack) uses elements in there that are a sort of eclectic and interesting mix, and it is, technically, a really good example of that kind of work.”

CORRECTION: In a previous version of this post, Sol LeWitt was misnamed. The Daily Orange regrets this error.

CORRECTION: In a previous version of this post, James Earle Fraser was misnamed. The Daily Orange regrets this error.

The Orange shot 50% from 3-point range but conceded 15 turnovers. END_OF_DOCUMENT_TOKEN_TO_BE_REPLACED

John A. Lally, a former Syracuse lineman, and his wife donated $25 million to begin the transformation of Manley Field House END_OF_DOCUMENT_TOKEN_TO_BE_REPLACED