Kelly Gibson is Syracuse's recruiting coordinator and has played a significant role in shaping Syracuse’s team, which will start the ACC tournament on Thursday morning. Fifteen years after winning a WNBA title, the fourth-year assistant coach passes on what she learned to the Orange’s current squad.

Quentin Hillsman said recruiting has gotten harder since he became the head coach at Syracuse.

He used to tell recruits they would get playing time to persuade them to join the Orange. But as his team improved, he could no longer make those guarantees.

“Just that she’s done it,” Hillsman said, “and her background and her success as a player has been a major reason why we’ve gotten some of the All-Americans, some of the other players we’ve gotten.”

Gibson is No. 22 SU’s (21-8, 11-5 Atlantic Coast) recruiting coordinator and has played a significant role in shaping Syracuse’s team, which will start the ACC tournament on Thursday morning. Gibson learned from WNBA legends and helped the Houston Comets win their fourth-consecutive championship in her rookie year in 2000. Fifteen years later, the fourth-year assistant coach passes on what she learned to the Orange’s current squad.

She compared the work ethics of Sheryl Swoopes, Tina Thompson and Cynthia Cooper to Kobe Bryant’s.

Gibson would get to practice and see Cooper was there before anyone else and would stay after practice, too. When the Comets’ best players were also the hardest working, that’s what taught Gibson how to be a pro and that’s what she tries to instill in SU’s players.

“We all say hey, you got to work hard, you got to come in early and stay late,” Gibson said. “But when you witness it from great players … when you’re there and you see it and you witness it, that’s the experience that I talk about.”

While most people think recruiting is about selling, both Hillsman and Gibson said it’s actually about building relationships and trust.

With Gibson’s background in the WNBA, it’s made it easier for her to gain the attention of recruits right away.

On a daily basis, Gibson makes sure to connect with recruits. Her key is to “hammer the phones.” She sends morning texts and afternoon texts to the recruits that she prioritizes. She checks their Instagram, Twitter and Facebook pages to gather information and find things to talk about with them. Gibson makes sure to stay in touch with coaches that have sent players to Syracuse in the past to check on their upcoming prospects.

Gibson strives to get the recruits to visit SU as early as possible and from there, she lets the campus and the team’s current players speak for themselves. The campus visit is what sold Cornelia Fondren and both Bria and Briana Day.

“She was different from most coaches that tried to recruit me,” Briana Day said. “She was very easy to talk to … She just talks like a player since she’s played at all levels. We can relate and she knows what she’s talking about.”

In practice, Gibson primarily works with the guards and her method is hands-on. St. Francis (Georgia) High School head coach Aisha Kennedy witnessed it when she visited a Syracuse practice.

“I was impressed that she was so passionate about it,” Kennedy said, “and that she took the time to explain the drill, why they do the drill.”

Kennedy coached SU senior Diamond Henderson and still coaches Abby Grant, a senior in high school, who has signed to play for the Orange next year. She noticed how genuine Gibson is with her players, which is why she’s comfortable sending them to Syracuse.

Henderson said what stands out about Gibson is, “She’s just cool.” And it’s Gibson’s experience that has helped her connect that way with players. 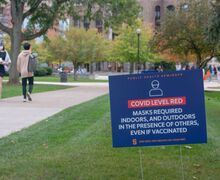 The university said it hopes this measure will give them better insight into infection level so it can best respond, if necessary. END_OF_DOCUMENT_TOKEN_TO_BE_REPLACED